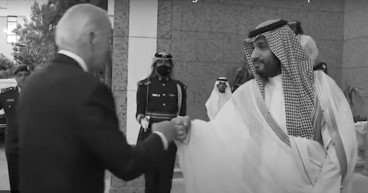 His offense – for which he paid with his life – was criticizing the policies of his government.

Today, I join many brave Saudi women and men, activists, journalists, and the international community in mourning Khashoggi’s death and echoing his call for people everywhere to exercise their universal rights in freedom.

Under a Biden-Harris administration, we will reassess our relationship with the Kingdom, end US support for Saudi Arabia’s war in Yemen, and make sure America does not check its values at the door to sell arms or buy oil.

Fast forward to the present day:

Biden took up the sensitive subject with the Crown Prince during a criticized visit
Katrine Skov Petersen, TV2 News, July 16

…in an attempt to get Saudi Arabia to pump more oil from underground so that petrol prices can fall, Joe Biden has defied criticism of his controversial meeting.

Sounds like he’s checked America’s values at the door to get more oil.

The TV2 News article, most of it relying on analysis by TV2’s in-house propagandist Jespper Steinmetz, is actually unexceptional: most of the establishment media are acknowledging the awkwardness of Biden’s meeting with a man whom less than two years ago he’d accused of directing the murder and dismemberment of a journalist.

A fair amount of awkwardness arose from Biden’s having fist-bumped the Crown Prince out of an apparent aversion to shaking his hand:

That is pretty awkward.

The sheer clumsiness of the stagecraft is a big part of the awkwardness: I have no doubt that Biden’s handlers considered the fist-bump a super-smart way to avoid shaking the hands of a man Biden had accused of a ghastly and barbaric crime.

“See, if you offer up a fist-bump, then you can say you refused to shake hands with him!”

“And then I get my ice-cream?”

“And then you get your ice-cream.”

The principle awkwardness, however, is something very few in the establishment media seem willing to examine. And that’s the reason why Ole Puddinhead would like Saudi Arabia to produce more oil.

And why does America need more oil?

Because Ole Puddinhead shut down the oil industry to stop pollution:

It’s worth remembering in all fifty states—and around the world. The man said he would shut down the American oil industry, and by gum that’s what he’s been doing.

Because he was too stupid to recognize the catastrophic consequences of such a policy, however, Ole Puddinhead has been caught by surprise by Americans’ increasing anger over skyrocketing gas prices. So he has to pretend to do something, lest Americans take their anger out on his party.

Funny thing, though: if you shut down American oil “because it pollutes,” how does foreign oil not pollute? The climate is global, is it not?

Is Saudi oil less pollutive than American oil? It would have to be for Biden’s policies to make any sense at all.

But of course it’s not: North American oil production is the cleanest and least corrupt in the world. Definitionally, then, anywhere else you get oil is going to involve more pollution and more corruption.

That’s the science of it, all you followers of science.

The reality of it, all you followers of reality.

But he couldn’t even manage that.

So here he is fist-bumping a man whom Ole Puddinhead himself believes ordered the murder and dismemberment of a journalist. All in hopes of getting some more dirty Saudi oil on the market.

It was badly done, Puddinhead.

But at least you didn’t shake his hand!