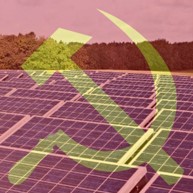 TV2 News published an interesting article last week. I only first came across it Monday morning.

It was apparently based on a TV2 documentary called “Operation X: The Dark Side of Solar Panels.”

I haven’t seen the documentary, but the article seemed balanced, interesting, and thoroughly researched. It was the kind of investigative journalism “60 Minutes” used to do, or at least the kind of thing “60 Minutes” pretended to do.

It all boils down to a simple question: are the solar panels deployed across Denmark being manufactured by forced labor in China?

The answer appears to be yes.

The article also gets into the question of whether the Danish company installing all these solar panels gives a damn. That company is called European Energy and it’s owned by Knud Erik Andersen, one of the richest people in Denmark.

The answer to this second question, whether European Energy or Knud Erik Andersen actually gives a damn, is apparently no. They do not give a damn.

I don’t think either of those answers required a “spoiler alert.”

Anyone getting solar panels made or assembled in China knows damn well what’s involved, and has known for several years now.

The global production of solar panels is using forced labour from China’s Uyghur Muslims in Xinjiang province, an investigation has found.

Xinjiang produces about 45% of the world’s supply of the key component, polysilicon, the research by the UK’s Sheffield Hallam University says.

It says the material is obtained under a massive system of coercion, a claim denied by the Chinese authorities.

Well, there are a lot of reports out there, urging a lot of things.

But the people shrieking the loudest about the need to save the world from climate change are mostly pretty silent on anything having to do with China—which is a little weird, given that China’s the world’s worst polluter.

The reasoning seems to be that the climate emergency is so desperately important that we don’t have time to check whether our renewable solutions are being produced by forced labor in a communist dictatorship. I mean, c’mon, man, the climate is important, we can’t get bogged down on distractions like slavery!

Speaking of distractions, none of this actually has anything to do with the thing that jumped out at me in the TV2 article.

That was a little throwaway line in the middle of the article.

See, there’s this guy in Turkey named Mehmet Tohti. He’s a Uighur expat studying in Istanbul. The article doesn’t say how long he’s lived there, but he was apparently already there when his mother and brother disappeared in Xinjiang province back in 2017. He started some kind of online protest campaign to try and find them, and then in 2019 a Chinese paper suddenly came out with an article headlined: “Allegedly disappeared Uighurs have been found and are living completely normal lives – disproving rumors.”

Then we get this:

The article was in the Chinese media Global Times. The tabloid newspaper belongs to the Chinese Communist Party and is so nationalistic that it has been described as the Chinese answer to the American media Fox News.

I mean, I guess we all know that the CCP is a pretty nasty bunch, but to openly compare one of their house organs to Fox News… I’m surprised Beijing hasn’t demanded an official apology.

This is a small thing, I know.

But small things can be revealing.

Look at the phrasing: “it has been described as…”

Oh. Really? By whom?

The journalists don’t say. But it took four of them to write this article—which is otherwise very good—and every statement in it is given proper attribution, except for this one. This one has to stand on its own. So I have to assume that “it has been described” as the Chinese version of Fox News by one of them.

I also suspect the line is dropped in there like that because the journalists are all decent, well-meaning leftists who just know that Fox is more nationalistic than the Chinese Communist Party, because that’s just one of those things that everyone knows. If they didn’t think this was the conventional wisdom, and an accurate reflection of reality, the line wouldn’t even make sense.

I mean, no one’s going to try to emphasize the nationalism of a Chinese paper by saying that it’s been described as the Chinese version of Teen Vogue.

The premise behind the comparison is that Fox News is the acme of nationalistic journalism.

Fox News clearly has a pro-American editorial perspective. No question.

It’s probably also true that it’s the most pro-American of America’s major news outlets. In fact, it often seems to be the only pro-American outlet, which is weird in itself.

But if “nationalism” means reflexive support for the government, you can hardly call Fox News nationalistic. Not when all their prime time hosts are bad-mouthing the Biden administration on a daily basis. They were pretty rough on Obama, too.

Fox News is, editorially speaking, generally inclined to support people, organizations, and policies on the conservative side of things, and to oppose those on the left. Their criticisms of the U.S. government therefore tend to relate to the orientation of the person or policy in question. Yes, they were generally pro-Trump and are solidly anti-Biden, just as MSNBC was solidly anti-Trump and is generally pro-Biden. Those are ideological positions.

The editorial position of the Global Times isn’t ideological. They’re one-hundred percent in the tank for the Chinese Communist Party on every issue, every day, all the time, forever. They’re not pro-China; they’re not even pro-Communism. They’re just the voice of the Chinese government. They’re not a news outlet, but a government megaphone.

Here’s a headline from July 13th: “Writers of UK think tank’s reports on Xinjiang revealed as related to terrorist groups: regional spokesperson.” They’re talking about the Sheffield Hallam University researchers mentioned in the BBC article above. I won’t link to a communist propaganda site, but here’s an excerpt:

The Helena Kennedy Centre at the Sheffield Hallam University issued four reports on Xinjiang to propagate the lie of “forced labor” in China’s Xinjiang region since last May.

The authors of the reports are Laura Murphy and Nyrola, who were revealed by media as having long received funding from government agencies like the US Department of Justice or having openly admitted to have a family member who is a terrorist suspect.

“We have seen too many similar reports that have no credibility or academic integrity, and are a total waste of time to read. Authors of these reports have never come to Xinjiang and do not know the real situation of Xinjiang’s employment. Their reports are lies without any use,” Xu told the press conference.

“Those who published such reports have a malicious purpose and they were accomplices of terrorists. The international community has gotten more knowledge of the truth about the Xinjiang region, and more and more people will not be fooled by the lies of anti-China forces,” Xu said, noting that many people have given positive evaluations of the Xinjiang region’s employment.

You can also entertain yourself with a July 3 article entitled “GT investigates: How US exploits minority workers and immigrants in agriculture and other labor-intensive industries,” which offers the following:

Inmates in prisons are subject to labor exploitation, minors working as child laborers are abused, and human trafficking remains rampant: Today, more than 150 years after the abolition of slavery in the US, the above-mentioned problems still exist in the country. Some American politicians have racked their brains to fabricate the “sad narrative” of “forced labor” in China’s Xinjiang region, but a lie repeated a thousand times is still a lie. It is the US, a self-proclaimed “human rights defender” or a “beacon of freedom,” that stands accused of using forced labor, which plainly demonstrates the US’ real disregard for basic human rights and its brutal exploitation of the country’s workforce.

Like I said, it’s a small thing. But it’s one of those little things that reveals a much bigger thing: the bubble in which Danish journalists operate. It’s a bubble in which it’s believed that explaining a despotic communist dictatorship’s propaganda mill is best done by comparing it to America’s only right-leaning news network.

Put it this way: Danish journalists are so like-minded and operate in such lock-step conformity that they’ve been described as the Danish version of the CCP.

Having noted that one small but deeply annoying thing, at least these four journalists had the courage to dig into a troubling question that a lot of very powerful people would prefer be left alone. The tone and content of the article make it very clear they’re on the right side of this issue—which is really no side, just genuine curiosity—and that they’re not afraid to step on any toes in pursuit of an answer.

More than commendable: it’s a shining example of that rare and highly-endangered species of writing known as journalism.

A single stupid and gratuitous whack at Fox News is a small price to pay for that.