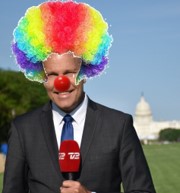 A couple of weeks ago, in one of my posts from “the the west,” I briefly mentioned a profile piece that Berlingske had published on TV2 News’s US correspondent Jesper Steinmetz. (And neglected to include a link: here it is.)

It reveals a Steinmetz I wish we could all see more of on television and online: a man who readily actually acknowledges the two sides of the American divide and doesn’t operate on the standard “Democrats Good, Republicans Evil” template.

It would be nice to see that side right now.

According to TV 2’s US correspondent, Jesper Steinmetz, Donald Trump has created so much public interest in the case and, according to the Department of Justice, spread so many falsehoods about what happened at the Mar-a-Lago search that they have to fight back against the former president.

Neither Steinmetz nor Buch give any indication of what those “falsehoods” might be.

Nor do they seem prepared to countenance the possibility that the DOJ and FBI have been anything less than entirely truthful in their statements or anything but noble in their deeds.

I think they hit the nail right on the head with “they have to fight back against the former president,” although they ought to drop the “back.” For reasons I’ve never completely understood, the Washington establishment has been determined to crush Donald Trump from the moment he secured the Republican nomination in 2016. You may recall there were elected officials and opinion leaders in the media calling for his impeachment before he even took office—and of course, the entire establishment fashioned themselves as the “resistance” throughout his entire presidency. Two attempts at impeachment, murmurs about the 25th amendment, even this:

Trump’s first week as president has made it all too clear: Yes, he is as crazy as everyone feared. . . . [A] possibility [for removing Trump from office] is one that until recently I would have said was unthinkable in the United States of America: a military coup, or at least a refusal by military leaders to obey certain orders.

What precisely spooked these people so badly about Trump? (And why on earth wasn’t Rosa Brooks thrown in jail for endorsing a military coup against an elected president?)

The establishment has gone after him by hook and by crook for six years now, and they still haven’t been able to make anything stick. Not even with an intelligence and law enforcement community willing to manufacture evidence against him.

Doesn’t that suggest that perhaps things aren’t quite as black and white as the establishment continues to insist they are?

“The message to Trump is: If you want a fight about the truth, let’s have it. Trump himself is upset that the Attorney General now wants to have the warrant published, but (he’s only doing so) because Trump has created so much fuss,” says Jesper Steinmetz.

It would otherwise be easy for Trump to publish the warrant, and what the FBI took from Trump’s home, the US correspondent points out.

Where is Steinmetz getting his information?

Former President Trump said late Thursday the warrant authorizing the FBI to search his Mar-a-Lago residence in Florida should be publicly released.

Driving the news: Responding to Merrick Garland’s request to a federal court earlier Thursday to unseal parts of the warrant that the attorney general personally approved, Trump said in a statement: “Release the documents now!”

What he’s saying: “Not only will I not oppose the release of documents related to the unAmerican, unwarranted, and unnecessary raid … I am going a step further by ENCOURAGING the immediate release of those documents,” Trump said.

“Release the documents now!” doesn’t sound like something someone would say if they didn’t want documents released, does it? Has my reading comprehension deteriorated that badly, or is Jesper Steinmetz just cribbing notes from the Washington Post?

However, there is a risk that Trump’s version of the case will be significantly weakened if the public gets an insight into what happened with the FBI mission on Tuesday night.

“It will shake Trump’s interpretation, because then he will have a bit more difficulty interpreting the search as proof that it is the Democrats who want to take him down,” says Jesper Steinmetz.

That first paragraph pretends to know “what happened with the FBI mission,” and that it will reflect poorly on Trump. The fact that the Washington Post is currently writing about there having been papers related to nuclear weapons among the documents seized by the FBI (a story being parroted by TV2 News) suggests that the release of the warrant isn’t going to reveal anything that should have Trump worried—otherwise whoever’s been whispering to the Post surely would have whispered something more damning.

In a lengthy National Review article about Merrick Garland’s statement about the warrant, Andrew McCarthy—himself a former federal prosecutor, and hardly a Trumpist—reminds his readers of FBI Director James Comey’s 2016 statement about Hillary Clinton’s “damn emails” (as Bernie Sanders called them).

For example, seven e-mail chains concern matters that were classified at the Top Secret/Special Access Program level when they were sent and received. These chains involved Secretary Clinton both sending e-mails about those matters and receiving e-mails from others about the same matters. There is evidence to support a conclusion that any reasonable person in Secretary Clinton’s position, or in the position of those government employees with whom she was corresponding about these matters, should have known that an unclassified system was no place for that conversation. In addition to this highly sensitive information, we also found information that was properly classified as Secret by the U.S. Intelligence Community at the time it was discussed on e-mail (that is, excluding the later “up-classified” e-mails).

None of these e-mails should have been on any kind of unclassified system, but their presence is especially concerning because all of these e-mails were housed on unclassified personal servers not even supported by full-time security staff, like those found at Departments and Agencies of the U.S. Government—or even with a commercial service like Gmail.

Mind you, this was the final, sanitized edition of Comey’s remarks — after the FBI edited out how much President Obama knew, and how likely it was (rather than merely “possible”) that hostile foreign intelligence services had had a field day infiltrating Clinton’s criminally reckless, non-secure, homebrew server system, patently designed to undermine government record-keeping requirements.

Nevertheless, no search warrants for Hillary. No dozens of agents descending on the Clintons’ Westchester manse. When the FBI wanted to seize evidence from Clinton, the Obama–Biden Justice Department forced the bureau to negotiate with Clinton’s lawyers. When the Clinton lawyers demanded limits on what the FBI could inspect, the DOJ sided with the lawyers. And charges? The FBI not only wrote up Comey’s statement dropping the Clinton email investigation months before interviewing Secretary Clinton and other key witnesses; the bureau allowed her co-conspirators to sit in on her final farcical interview — as her lawyers! And when Clinton gave preposterous answers to the agents’ questions, there was no thought of charging her with false statements — she was sent on her way, to go run for president.

Nuclear weapons, huh? The Biden administration, while groveling to Iran to rejoin a catastrophe of a deal that would put our enemies, who are actively trying to murder former American officials, on a glide path to nukes, is now worried about Trump’s possession of nuclear intelligence?

Now, I’ve shared all the Steinmetz citations from the TV2 News article—whose headline, you may recall, was “Trump facing headwinds after FBI action — and it’s his own fault, says Jesper Steinmetz.“

Trump’s “fault” was apparently “creating so much fuss” about the raid on his private home that Garland was compelled to call for the public release of the warrant.

Does anyone respond to a night-time raid of their home by 30 FBI agents with equanimity? Was Melania supposed to offer them iced-tea and cucumber sandwiches while they tore through her closet and broke into her husband’s safe?

As we’ve seen, and as has been reported widely all over, Trump wants the warrant released. With that in mind, if “creating so much fuss” was instrumental in getting Garland to release the documents, then it actually got Trump what he wanted.

The headwinds he’s supposedly facing are a product of Steinmetz’s fancy: the warrant, by his reckoning, will inevitably reveal such monstrous deeds that Trump will finally have to withdraw from public life. But we have no idea what’s in that warrant, or in any of the documents comprising the paper trail that led to its being issued.

Am I the only one who remembers the way Democrats threatened Trump over a phone call—with Adam Schiff actually lying about what was said in it—only to have Trump peremptorily release the full transcript, thereby revealing Schiff’s lies?

So the headline is wrong and the handful of statements from Steinmetz in the article don’t include a single objective fact. It’s speculation from start to finish—and, as usual, speculation based on the worst assumptions about Trump and an almost childish credulity in a DOJ and FBI that have repeatedly proven themselves willing to bend and break and fold and spindle and mutilate the truth in their pursuit of the Dread Tyrant.

So never mind all the nice things I said about Jesper Steinmetz back in July: he’s misinforming the Danish public just as wildly and enthusiastically as his peers are.