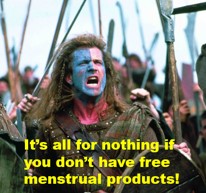 It’s a red-letter day in Scotland.

As the DR headline puts it, “Starting today it’s free to menstruate in Scotland.”

Menstruation has always been free of charge in Scotland, as far as I can tell, but beginning today tampons and menstrual pads will be available free of charge to that country’s menstruators. (Really to everyone: apparently the law specifies that “individuals should not have to justify why they need a menstrual-related product,” so husbands, fathers, boyfriends, brothers, sons, uncles, nephews, drinking buddies, boon companions, etc, will not be challenged when picking up products for the women in their lives.)

Berlingske’s headline is more accurate than DR’s: “Scotland is the first country to make pads and tampons free.”

It seems to me that both articles have buried the lede: if the taxpayers of Scotland are willing to spend more than ten million dollars a year supplying women with menstrual products, it can only be because there is no longer any hunger, illiteracy, or crime in bonnie old Scotland. Either that or the Scots have prioritized access to menstrual hygiene products over food, literacy, and crime (among other things), but that would be crazy.

The Scottish Parliament passed the law back in November 2020, while the corona pandemic was raging. The pandemic had exacerbated “menstrual poverty” in Scotland. Research found that 1 in 10 British girls and women aged 14 to 21 could not afford menstrual products.

That’s intriguing: how did the pandemic “exacerbate” menstrual poverty?

And say: what exactly is menstrual poverty? I’d never heard of it before, but DR has a helpful inset to explain:

WHAT IS PERIOD POVERTY?

Period poverty or menstrual poverty is a problem that affects girls and women worldwide.

The term also covers taboos, stigmatization, and lack of education in women’s menstruation.

If 10% of the young British female population can’t afford £5-10 per month, that’s a staggering level of poverty.

I assume that all of the young women under the age of 18 and many (if not most) of those under 21 are still getting some help from mom and dad, so this would seem to imply that these girls’ parents are too poor to buy menstrual hygiene products for their daughters.

DR informs us that the law passed through the Scottish Parliament on a 121-0 vote.

I don’t follow events in Scotland and I’ve only spent about 72 hours in the country in my entire life, most of it committed to sampling scotch. So I have no strong sense of the country except that it seemed perfectly lovely. If their parliament voted unanimously to have taxpayers pay for tampons and pads, I can only assume it’s because this was something all Scots supported—or at least all true Scotsmen.

But I’m curious: toilet paper on Amazon.co.uk seems to run around £0.50 per roll. (I’m eyeballing it.)

Toilet paper is a personal hygiene product, as are tampons and menstrual pads.

Is there no toilet paper poverty at all in Scotland? And if there is, why was menstrual poverty considered more important, given that toilet paper is used by more or less everybody, every day, while tampons and pads are used exclusively by women, and for only about 40 years of their lives?

Why does a government choose to cover the cost of a product for all women—even tourists, according to the articles—when apparently more than 90% of them have never had a problem obtaining it on their own?

I get it: people like free stuff. I understand programs that provide food, clothing, and shelter to the poor. I once worked briefly distributing government food throughout western Illinois: big bricks of cheese, generic cornflakes and packets of mac and cheese. Stuff like that. It never once occurred to me that if my government was going to hand out food to some people, well then by god it had better hand some food to me!

And I was quite poor at the time, living with 5 friends in a burned-out candy factory we were converting into a theatre company. The government food distribution gig was the best job I’d had that year: waiting tables at Sizzler was a very distant second.

If there are poor girls who can’t afford menstruation products, by all means step up and help them. But why burn taxpayer money giving help to people who don’t need it?

Upon the adoption of the law in 2020, the woman behind it, Scottish MP Monica Lennon, believed that Scotland was leading the way for the rest of the world.

“Scotland is an example of best practice and there is an opportunity for other countries in the world to learn from what we have achieved on menstrual poverty in just a few short years,” she told The Scotsman.

What we’ve learned is that if you give people stuff they no longer lack it.

I don’t think that qualifies as a best practice, and I don’t think “menstrual poverty” is a thing. There’s poverty, and there are impoverished girls who can’t afford £10 a month for feminine hygiene products. But I bet you won’t find a single woman, even in Scotland, who isn’t economically poor but is somehow afflicted by menstrual poverty (unless she’s afflicted by intellectual poverty, which to judge by stories like may very well be the scourge of Scotland right now).

Berlingske takes a more measured view of the matter:

The Scottish legislation created ripples in the water that spread all the way to Denmark.

According to Berlingske, in 2021 (the political party) Frie Grønne proposed that “all menstruating women in Denmark have access to free menstrual products” before the end of 2022.

However, the proposal did not exactly arouse enthusiasm in the Folketing.

Both the Social Democrats and the Radicals believed that there were greater equality issues to address.

Furthermore, it was pointed out that Denmark has other systems for public welfare. Therefore, there is not the same need to do things for free at home.

“There is support in other ways, where people have the opportunity to prioritize their funds,” said Peter Hummelgaard (S), who was then Minister for Equality, according to Berlingske.

So at least Denmark’s not succumbing to this particular flavor of intellectual poverty.

Yes, there is no such thing as menstrual poverty. There may be an issue with people unwilling to prioritize such things as hygienic products, but that is something else.
And there absolutely is a serious issue with intellectual poverty. Unfortunately, that last one is completely out of control all around the world these days.

That’s the way now, isn’t it? Make up a thing — a crisis, a pathology, an illness, a sexuality — and then insist the world wake up from its slumber and shower the imaginary thing with money and attention. Amazing how much of the world actually does!