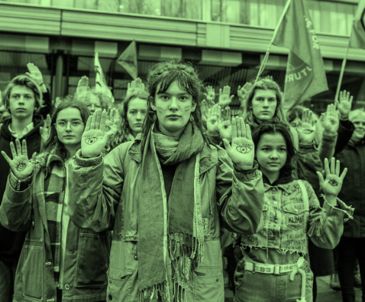 A spectre is haunting Europe—the spectre of environmentalism.

The most destructive ideology in the western world right now is environmental extremism.

It’s going to kill more people and cause more human suffering than any other ideology to have infected the western world since Marxism—and let’s face it, part of the toxicity of the green movement is on account of the Marxism woven into it.

I used to consider environmentalists to be well-meaning but misguided souls—people who genuinely wanted the best for everyone but were too politically, historically, or economically oblivious to understand the most likely consequences of the “solutions” for which they agitated so enthusiastically.

I’m done with that.

Not because I’ve lost patience, but because in the face of the obvious consequences of their own policies, the greens remain unrepentant.

We’re running out of energy in Europe. That’s a literal statement: we aren’t going to have enough energy to get us through this winter.

The only reason we don’t have cheap, abundant energy right now is because in their rush to get us off fossil fuels, the greens couldn’t wait until we had something else lined up to take their place.

The greens championed these disastrous policies because they’re under the same delusion as every other utopian movement in history: they’ve prioritized the lives of hypothetical future people over the lives of the people living on the planet right now, which obligates them to impose their solutions on the rest of us for the good of the unborn.

Their utopian orientation gives them a sense of moral superiority. They consider us selfish and short-sighted, greedy and careless, for thinking our own welfare matters. They’re better people because they care more about future generations.

It’s that sense of moral superiority that allows them a clean conscience in imposing their will on the rest of us. They are the wise ones, the elect, the chosen: it is their duty to tend to the salvation of the masses.

Look at the language they use: it’s religious and apocalyptic. There’s no room for negotiation, no possibility of compromise or incrementalism. There can be no trade-offs. You’re either with them, or you’re a heretical dirtbag ignoramus whose opinion is not just illegitimate but dangerous—and must therefore be suppressed.

They’re not against free speech, mind you: they’re only against the spread of misinformation.

And what’s misinformation? Why, it’s whatever they say it is.

The most prominent evangelists of the green gospel have been thumping their bibles and predicting environmental hellfire and brimstone for decades.

That’s a matter of public record. Look at the green pronouncements of the 70s, 80s, 90s, and 2000s. They were wrong, all of them, and yet we’re still bending the knee to policies implemented to prevent all the terrible things they keep predicting.

Since they can’t defend their position by holding up examples of past predictions having come true, they simply point at every meteorological or climatological event of the present and blame it on climate change. Every heat wave, every drought, every flood, hurricane, cyclone, monsoon, frost, blizzard—always the fault of climate change.

People who can’t reliably predict much of anything simply declare that whatever happens is proof of their theories: we knew this would happen!

How much faith would you put in someone whose sports predictions had been consistently wrong for thirty years telling you that all of this weekend’s games went exactly as he predicted they would?

The climate is changing. Fair enough. The world of 2100 will be warmer than the world of 1900. Okay.

What was it about the world of 1900 that was so ideal? What’s the “correct” global temperature? I’m writing this on a piece of land that was not so very long ago—a mere moment ago, climatologically speaking—underneath more than a mile of ice.

I like it better this way. I’m glad not to be under a mile of ice.

But who’s to say that northern Europe doesn’t “belong” under a sheet of ice? One has to take a very fundamentalist view of things to believe that the current configuration of our continents is the one true and proper configuration: that changing coastlines and ice cover and the emergence of new islands and the disappearance of others are some kind of new and terrible phenomena we have to fight.

There’s no “ideal” temperature for our planet. It has in its time been a boiling cauldron of lava and a single vast ocean. There are only ideal conditions for people. Once we acknowledge that it’s people, not the planet, that we’re concerned about, we have to take account of all the variables affecting human welfare. Temperature is one such variable, certainly, but only one among many. A planet that’s a few degrees warmer would certainly require a lot of adaptation, but a warmer world might be a net plus for humanity despite the high costs of adaptation. (And as we’ve seen, the social and economic costs of fighting global warming are enormous.)

That’s Bjørn Lomborg’s whole position in a nutshell. He’s the Martin Luther of envrionmentalism: a clergyman outraged by the absurd orthodoxies of his co-religionists. His Skeptical Environmentalist, published in Danish as Verdens sande tilstand (“The world’s true condition”) back in 1998, is almost perfectly analogous to Luther’s celebrated 95 theses: a cri de couer against the excesses of his own faith.

There’s absolutely nothing wrong with attempting to be better stewards of our planet: to pollute less and conserve more. But recent events in Sri Lanka shows what happens when you elevate the welfare of “the planet” above the welfare of actual human beings: people suffer. Immensely.

We’re beginning to suffer in Europe, and our suffering this winter is also likely to be immense—immense enough that European governments are already planning for kintetic consequences.

The suffering in Europe has only one cause: it’s the obvious and logical consequence of our having followed the green agenda.

All across northern Europe this winter, people will be burning wood (and god knows what else) in order to keep warm. We know this because firewood has become so precious that it’s become unaffordable in the few places where it’s even still available, and Danish insurance companies are urging us to put our firewood under lock and key because so much is being stolen. Wood-burning fireplaces and stoves are something that the greens were working hard to outlaw because few heating sources pollute as badly as burning wood. But people will be burning wood like mad this winter because their usual heating sources have become too scarce and expensive to be used.

Because of green policies.

In other words, the “planet-saving” policies pushed by the greens will be directly responsible for more firewood being burned in Europe this winter than has been burned over any winter in living memory. We can thank the greens for all the excess pollution we generate this winter, as well as all the health problems arising from smoke inhalation, and the inevitable increase in residential fires (and whatever damage and death they cause).

Green policies will also be responsible for every bankruptcy caused by these astronomical energy prices—and the cascade of human misery caused by each and every one of those bankruptcies. Those are already starting to occur.

And of course, any increase in cold-related deaths across Europe this winter will be thanks to green policy.

And yet they’re still not backing down.

That’s all you need to know to realize they are fundamentally unconcerned with human welfare. They’re wild-eyed utopian extremists. And a menace to the rest of us.

I don’t understand why anyone in northern Europe has any patience at all with the greens.

Environmental extremism is actively and knowingly undermining the west.

Theirs is a superstitious and primitive religion and the sooner we get its many adherents converted back to enlightenment values, the sooner we can get things back on track.

If we can’t convert them, or deprogram them, the least we can do is vote them out of power at every level of every government.

The American president and his supporters at home and abroad have illustrated by example that it’s acceptable to describe one’s political adversaries as enemies of the state and dangers to democracy.

Well, it wasn’t MAGA-Republicans that have been endorsing civilizational suicide for the past 30-40 years.

It wasn’t conservatives who shut down the energy infrastructure.

I don’t care what country you’re a citizen of or what your politics are: anyone voting for greens from this point forward is voting for misery, poverty, famine, and ruin—and knows it.

It’s hard to believe, but so far I fear the answer is yes.

They will keep voting for more misery for a while yet – the programming has been quite thorough and all-encompassing over the past 30+ years. Of course, even an earthworm will recoil from fire (pain) so it is mainly a matter of how much pain will be needed before the inevitable preference cascade the other way starts. Hopefully, we find out very soon, but as long as the majority are happy to be told what to think by the legacy media, I daresay this could get very grim.

Not as strong as reality, as we and they are about to find out, but looking at the left, there are only a few glimmers of uncertainty and doubt beginning to show here and there in the dark sea of righteous certitude.

Yeah, your comment and a handful of minor “news items” today made me realize I didn’t get it all out of my system yesterday.