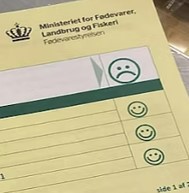 An imaginary reader asks: “Greg, I can’t help noticing that sometimes your post titles are capitalized in standard American title case, and sometimes in the more informal sentence case so common on the internet. And now you’re using shouty all caps. Why?”

So let’s drop the topic and move on to a very little story that hit me so hard I nearly entitled this post “Everything wrong with the western world in one tiny story.”

It cost a butcher shop in Frederikshavn dearly that lower-case letters were used in the product declaration of their tomato-with-meatballs soup to state that the soup contained flour.

The offense of writing “flour” instead of “FLOUR” cost master butcher Dorte Carlsen from Slagteren Suensonsvej (“The Suenson Street Butcher”) a fine of 40,000 kroner and a frowny face.

I’ll interrupt for some context:

Forty thousand kroner is about 5200 bucks.

Danish establishments selling or serving food are rated by the Ministry of Food, Farming, and Fishing on a sliding scale of smileys, presumably for the benefit of people who are illiterate, innumerate, foreign, or all three. The system was introduced in 2001 as a four-step scale: big smile, little smile, no smile, and frown. In January of 2022 the little smile was dumped so it’s now just a three-step scale.

There’s no Danish word for “frown”—Danes use the phrase “furrowed brow” to describe an unhappy expression—so the international frowny icon is actually called an “angry smiley.”

Or a “sour smiley,” depending on how you feel like translating sur.

“I think a fine of 40,000 kroner is completely unreasonable,” says Dorte Carlsen.

The costly mistake was written on the label for a package of tomato soup with meatballs. It was indeed clearly stated that the meatballs contained flour, but it was not written in capital letters, as the food legislation prescribes, and therefore triggered both an angry smiley and a fine when food inspectors visited the store in Frederikshavn a little over two weeks ago.

Why is the use of lower-case letters instead of capital letters considered such a serious offense?

The [Ministry] did not want to be interviewed in the case, but wrote in a written response to TV2 Nord that the rules for clear labeling of allergens have been introduced because eating food that contains allergens can have fatal consequences for an allergy sufferer.

And as we all know, people with life-threatening food allergies are incapable of reading lower-case letters.

(Now the rest of you know why today’s post title was in all caps: I wanted to try attracting some readers from the fatal food-allergy community. I shouldn’t say that out loud because it sounds so cynical, but that’s the beauty of it: they can’t read this!)

I myself am deathly allergic to a very common medication. I’m not saying which because I don’t want my kryptonite out on the web, but it threw me into anaphylactic shock when I was a senior in high school. As a consequence, I do not take any medications without first verifying with 100% certitude that they do not contain this very common medication. I read the ingredient lists on vitamin bottles. I tell every doctor, dentist, nurse, intern, and receptionist I encounter on any medical or dental visit about my allergy. And they all say, “Yes, I can see that in your chart.” It only takes one illiterate to kill me, however, and in a country boasting so many illiterates that food inspections have to be represented with hieroglyphics I’d obviously be a fool to take chances.

The idea that I might not notice the presence of something that would kill me on a list of ingredients simply because it wasn’t capitalized is therefore, in the words of Dorte Carlson, “unreasonable.”

I mean, who goes breakdancing in minefields? Who walks into a chemistry lab and starts doing shots from every beaker and test tube? Who tests to see if their gun is loaded by peering into the barrel and pulling the trigger? (Besides Wile E. Coyote.)

People are pretty focused on avoiding things that could kill them.

“Now we’ve removed the entire text (from the label), so that it just says tomato soup with dumplings, and that the customer must contact us and ask,” says Dorte Carlsen.

Now that customers can no longer read on the packet of tomato soup that there’s flour in the meatballs, the master butcher meets the requirements to get a happy smiley again.

I see signs like that all the time: “If you’re concerned that a particular ingredient may kill you, kindly ask one of our staff whether the food you’re thinking of buying contains that ingredient before you purchase it.” That’s not how they’re worded, but it’s what they mean.

Look, if someone knows they’re allergic to flour, so allergic it could kill them, and they’re picking up packaged soups from a local butcher but can’t be bothered to read the ingredient list carefully enough to notice the presence of that ingredient unless it’s in ALL CAPS, then how can we assume they’re attentive enough to read a sign? Or that, having read it, they’ll have the wits to understand it or the wherewithal to act on its advice?

And does the sign have to be in ALL CAPS?

I said up top that I almost entitled this post “Everything wrong with the western world in one tiny story.”

The wrongness in question is the way in which we’ve been transferring responsibility for our lives from ourselves to our governments. We apparently consider ourselves too stupid to take the most basic precautions against killing ourselves through our own negligence. We consider ourselves so stupid we need important information distilled down to emoticons.

But are we really that stupid?

ARE WE REALLY THAT STUPID?

I don’t think we are.

But we’re stupid enough to let our governments treat us as though we were, and sooner or later that’s gonna bite us mighty hard in the ass… the way it just bit Dorte Carlson.

One the one hand the narrative being pushed is that we (adult citizens) are like children, unable to think for ourselves and unable to weigh risks and consequences, and that therefore the government must step in and monitor, control, and regulate pretty much anything at all.
On the other hand, the same government to which we are supposed to deliver our fates, turns out to lack any kind of common sense, or ability to discriminate and evaluate a situation according to the relevant and particular facts.

Hence, the situation you outline so nicely: For example, while it is true that there are food allergies that can provoke anaphylactic shock (and thus, potentially death), wheat is associated almost exclusively with celiac disease, which affects the stomach. Anaphylactic shock is not a symptom of celiac disease, and thus it makes no sense to pretend that insufficient labeling of the presence of gluten is on the same order of risk as choking to death because you ate shellfish and your throat closes due to swelling.

So, what we have is a government bureaucracy that is:
1 unable to discriminate between things

3. unable to apply common sense to a situation:

Heavy-handed, machine-like adherence to the letter of the law, no allowance for grace or even the most rudimentary understanding of human nature, let alone empathy.

We can add
4. liable to perform excessively harsh enforcement of the rules

And in case, someone is still missing the point, there is nothing to stop the regulators to decree that henceforth it is not enough that wheat be indicated in capital WHEAT. They may decide that WHEAT must have a certain font size and be written in a particular font type and color, and that it must be in bold and NOT in italic, for example. And if you deviate from whatever detailed rules have been decided by unelected bureaucrats, then the same bureaucrat that nailed Dorte Carlsen (or a colleague of his) may show no hesitation in visiting the same punishment or worse on you.

That Dorte Carlsen can satisfy the bureaucrats by making the service poorer is just perfect. Absolutely perfect.

Hallelujah and pass the tomato soup with meatballs…