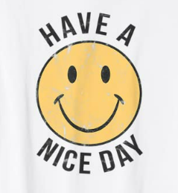 Yesterday’s post about smiley icons got me scratching at my memories of the 70s—the first decade from which I have any.

I remember a lot of smileys—all of them on t-shirts, mugs, and bumper stickers, and most of them accompanied by text saying “Have a nice day.”

I was just an akward, acne-bespattered 14-year-old with braces when the 70s drew to a close, so my memories of that decade are necessarily those of a child. Over the course of my life I’ve learned a lot more about the 70s than I actually remember of them, and that’s colored and probably even distorted a lot of those memories retroactively.

That coloring and distortion is surely why I think of the Have a Nice Day smileys as having been ironic or even sarcastic, even though I’ve never seen, read, or heard anything to suggest that was the case. It’s just that from today’s perspective it’s hard to imagine anyone walking around in a Have a Nice Day t-shirt unironically.

That’s not entirely unreasonable: isn’t it easier to think of bell-bottoms, pet rocks, and Abba (to name just a few phenomena) as having been embraced ironically rather than sincerely?

Lily Tomlin was an iconic part of 1970s culture, but by 1985 even she was saying aloud, “No matter how cynical you become, it’s never enough to keep up.”

But I’m getting tangled up in stupid digressions: I did in fact have a point, and a very simple one.

Where did all the Have a Nice Day t-shirts go?

The mugs, the bumper stickers?

I know they’re still out there—I looked it up, you can buy them online, but they’re all billed as retro.

For example, there’s this ad on Amazon:

It’s probably hard to see if you’re reading this on a phone, but that happy face is what designers call distressed: it’s been given a look of wear and tear. How ironic is that? And how perfectly in tune with the zeitgeist? A distressed smiley.

Why would anyone distress a smiley? So they can market it as retro.

Who can keep up with that kind of cynicism?

When I ask where all the Have a Nice Day shirts and stuff have gone, though, I’m not even being that literal.

Where’s the simple sunny friendliness and optism in our culture today?

In the early days of the pandemic, the actor John Krasinski (better known as Jim Halpert from The Office) started a YouTube Channel called “Some Good News.”

According to a website called Looper (which I didn’t even know existed):

This web series had one goal in mind: to bring in “a news show dedicated entirely to good news.”

Premiering on March 29, 2020, the show rose to quick fame by featuring many special guests and always having a surprise. Some highlights from the web series included a reunion of The Office for a Zoom wedding, a virtual prom featuring Chance the Rapper, Brad Pitt, Billie Eilish, and The Jonas Brothers, and a virtual graduation with Ryan Reynolds, Samuel L. Jackson, Oprah Winfrey, and many others. On top of that, Krasinski later launched Some Good Merch, an online merchandise store where 100% of profits go to charity.

The web series seemed to be going great and was exactly what the world needed at the time, so it comes as a surprise when fans realize John Krasinski has disappeared from the show. Why did this happen?

The article cites an unnamed fan: “So he made 8 YouTube videos comprised largely of unpaid contributions from fans, sold the brand to a major conglomerate, and isn’t even going to make it anymore? Just cashed out? Does this rub anyone else the wrong way, kinda?”

No worries, anonymous fan: apparently Paramount+ bought the rights and signed Krasinski on as executive producer, and he says he’s “going to be a part of it whenever I can, and I’m going to host a couple of episodes and bring on a different community of people. We’re really, really excited about it.”

Which doesn’t at all sound like something anyone would say unless they were really, really sincere about it.

But let’s set our cynicism aside: as Looper notes, the series racked up “over 72 million views and 2.5 million subscribers” in just two months.

That right there is some good news indeed: there’s a market for decency and geniality, for optimism and good cheer. For niceness.

And let’s take the worst-case scenario and say it was just Krasinski trying to cash in on on the human need for optimism during a dark and frightening period. Hell, let’s say he’s an evil genius whose entire persona is just a cover for his dark and depraved soul. That doesn’t change the reality that people are hungry for niceness, and to hell with how the sausage gets made.

So why aren’t the cynics out there milking the fuck out of it?

I can’t answer that, but I can say that I’m beginning to get the sense that people have had enough of all the doom and gloom and spite and vitriol of the past few years. Not everyone, obviously: a lot of people seem to be genuinely energized by all the tribalist riots and brickbats and misery. But even more people really do seem ripe for some upbeat niceness. They’re starving for it. Not as escapism, not to deny reality, not even to “own” the libs or the cons, but to get through their days feeling human and decent.

Everyone under forty has been told for their entire lives that the planet is doomed and their future is doubtful. We’re going to drown under melted polar caps, or wither and die from global warming, or choke to death on the air we’ve polluted, or get cancer and die from the chemicals in our foods, or starve to death because the good earth will stop feeding us from sheer spite—or maybe just be rounded up and shot by the murderous green shock troops of Greta Thunberg.

All that and more, despite the fact that virtually every single metric having anything to do with global human welfare has been improving since long before any 40-year-old alive today was born. We’re living longer, healthier, wealthier lives than ever before; fewer of us are dying in wars; fewer of us are starving to death. Western civilization has been doing wonderfully, and whatever bumps in the road we’re going through right now are just that: bumps. They may be uncomfortable, and they were certainly avoidable, but they’ll be in our rear view mirrors soon enough.

(I don’t want to oversell the optimism, though: historically speaking, the first world war, the great depression, and the second world war were also “bumps.” So was the Hundred Years’ War.)

In the grand scheme of things, we’re just experiencing a brief dip on a line whose trajectory is still advancing ever upward. We get knocked down, but we get up again.

Unless we really fuck things up.

So let’s not fuck things up any worse than we already have.

It is all too easy to become depressed, cynical and jaded, especially if you expose yourself to the news and the interwebs. The whole point of Krasinsky’s Good News angle is that it is unusual, a novelty, a radical departure from the overwhelming tendency to focus on bad news, on fear, sorrow, outrage and anger, the worse angels of our nature, if you will.

Which is why a pause from online exposure is one of the best ways to improve your mood and your general demeanor.

A few years ago, the family embarked on a vacation trip to the US. The sense from the media and especially from the internet was of a country being torn apart. This was in the innocent days before Covid, but still during the reign of the great Orange Terror, so all the news from the US was set firmly on the fear and outrage channel, with volume dialed to 11. Having lived in the US previously, and having access to non-MSM media, I knew that reality was different than the all doom, all gloom barrage that was being broadcast 24×7.
But even, so, it was all getting to me. And some part of me was wondering if the country I had known was disappearing.
Well, it turned out that spending a few weeks in going from Chicago and moving south and east to see some old friends, meet new ones and ultimately meeting up with family, was a balm for the soul. We got to spend time making friends, talking with strangers and interacting with ordinary people living ordinary lives. While spending some time in southern Kentucky, I took my son and daughter to the firing range, because they had never tried that. And while they were trying out guns and learning to shoot, I talked to some of the other people spending their free time doing the same thing.
And everyone, whether friends or strangers, whether at the firing range, or standing in line at the Dollar Store, or casual acquaintances of our friends who were stopping by for a few hours on their way to some other place, they were all just so darn nice. And normal. People were all friendly, some were curious about where we were from, some had strange notions of what life in northern Europe was like, all had their own viewpoints, idiosyncrasies and opinions. Some of them were supportive of the President, some of them thought he was icky, but they were all regular, normal people the way people who life their daily lives usually are.

And it became clear to me just how mind-warping and distorted a view of the world you get from being immersed under the lidless, unending media Eye of Sauron.

It was one of the most cheerful and uplifting experiences in many years and I came away from that trip much more reassured that below the tempestuous surface, there is still a deep sea of normal right where it has always been.

By and large we are a marvelous lot. 🙂