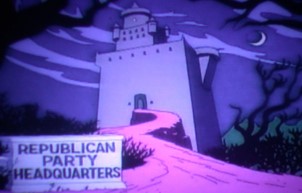 This morning—not much more than 24 hours before polling places open in America—Berlingske published a signed editorial entitled “Berlingske believes: The USA is in a death-spiral of mistrust.”

There’s plenty of empirical data to support that premise.  I touched on a lot of it yesterday and on Friday.

The United States is imbued with a deep distrust of the electoral system that you come crashing into whenever you move among Americans. And it’s no longer political ideas that control the direction of the United States. It’s fear and loathing of one’s political adversaries.

That may be overstating the case, or understating it, but given the available data it’s a fair enough hypothesis.

But that’s not the actual hypothesis set forth by editor Birgitte Borup in the text of the editorial.

Here are her data points:

Borup isn’t arguing that there’s a death-spiral of mistrust: she’s buying into the Democratic propaganda that Republicans are a threat to democracy.

Look at the way she drops the word “election deniers” without explaining what it means.  (Yes, I know, in English it’s a phrase, but in Danish “valgfornægtere” is a single word.)  She apparently doesn’t feel any need to explain the term because American leftists have such excellent message discipline that she’s almost certainly under the impression that this is a common American expression understood by everyone, even in Denmark.

What does it mean?

Democrats won’t define it because virtually any actual definition made of real words would inevitably indict as many Democrats as Republicans.

For example, if election denial is defined as “refusal to acknowledge the results of an election as legitimate,” then every Democrat who blamed Trump’s victory on “Russian interference” in the 2016 election, and every Democrat who called Trump an “illegitimate” president, is necessarily an election denier.  And that’s a lot of Democrats.  Most of them, really—certainly all of the major figures in their party.

That’s one example, but you can torture the English language to within an inch of its life and you’ll never get it to produce a viable definition of the phrase that doesn’t damn the left for their collective freakout from 2016 through 2020.

My point is that “election denier” is not a value-neutral term: it’s a partisan smear slapped on anyone ill-mannered enough to suggest there was anything untoward about the 2020 presidential election.

A lot of American media are actually counting “election deniers,” each of them using their own definition of the term, and none of them applying the definitions to Democrats who rejected the results of the 2016 election.  The Washington Post, for example, ran this headline on October 12: “A majority of GOP nominees deny or question the 2020 election results.”

Deny or question! How dare anyone question the 2020 election results—a Democrat won! Questioning is strictly reserved for elections in which Republicans win.

Back to the Post. Here’s the lede of the article whose headline I just cited: “Experts say their dominance in the party poses a threat to the country’s democratic principles and jeopardizes the integrity of future votes.”

(Experts again.  Always with the experts.  Bless their little expert hearts, have they had anything right lately?)

“Not hyperbole,” he tweets.  “A vote for a Republican is a vote to end Democracy.”

He’s saying that the act of simply casting a single vote for a Republican—any Republican—is slashing a blade across the tender throat of Democracy. He’s saying that’s the literal truth, a tautological fact. It’s not hyperbole, nothing like it!

Because he’s lost his mind.

His insanity isn’t something that spontaneously sprouted in the fertile fields of his little gray cells, but something that’s been actively planted and fertilized by the leftist establishment in America.  Deliberately, willfully, and without a thought to the possible consequences.

Because they’ve lost their minds.

“Vote for us or it’s the end of the world!” is not, after all, the rallying cry of the sane.

Note also the way Borup frames voters’ concerns: on the right, they fear the electoral system is “rigged”—the scare quotes are hers and she uses the English word—but on the left they’re afraid of presset fra højrefløjen (“right wing pressure”). No scare quotes required there, obviously, because who isn’t scared witless by the prospect of right wing pressure?

She completely neglects a very important question about those Republican fears, however: who exactly do they believe has rigged the system?  Democrats, obviously—and it’s hard to wave that concern away in scare quotes when the left actually boasted of how they fortified the election of 2020.

Both sides distrust each other.  There, I said it.  That’s all she had to say.

Borup cites the Paul Pelosi episode as an example of right wing political violence (an uncertain hypothesis in itself) but makes no mention at all of the many, many acts of political violence committed by the left.  (I documented several of them in Sunday’s post.)

She says the GOP has abandoned dignity (!) and classical conservatism “to make room for currents that kill democracy from within” without offering any evidence at all. Not even an anecdote.

Who has abandoned classical conservatism?  Which policies have been abandoned, and by whom, to accommodate these mysterious and lethal “currents”—and what exactly are they?  Where are they manifest?

And exactly where on the left does she believe dignity still holds sway?

Is dignity even still a thing?

Might one not make the case that American Democrats have abandoned classical liberalism with their turn against free speech, freedom of assembly, freedom of religion, and so on?  At least to balance the scales in any jeremiad against a general decline of ideology as a driver of American politics?

Borup’s editorial tries very hard to sell itself as a neutral and objective assessment of the growing credibility gap in America, but it’s no such thing.

It’s a one-sided broadside against lying, violent Republicans and their “Big Lie.” She only sees Democrats being part of the “death spiral” insofar as they’re frightened that American democracy is imperiled by all those awful Republicans.

Meanwhile according to Fox News:

Democratic Georgia gubernatorial candidate Stacey Abrams argued that she will win her election on Tuesday if voters can “navigate” the alleged voter suppression systems installed in her state by her opponent Gov. Brian Kemp, R-Ga.

She spent a good portion of her interview with MSNBC anchor Ali Velshi on Saturday complaining about Georgia Republicans’ supposed voter suppression initiatives and attempts to “game the system” to stay in power next election day, despite record early voting turnout across the state.

Abrams stated, “And while the polls are always going to tell the story you want to see, what we know is that the untold story is that this is a tight race, it is neck and neck, and we believe that we are on a path to victory if we can get all our voters turned out and if they can navigate the difficulties put in place by Brian Kemp and Brad Raffensperger.”

Call me crazy, but doesn’t Abrams’s logic suggest that if she loses it can only be because voters couldn’t “navigate” Governor Kemp’s “suppression systems” or whatever “difficulties” he may have put in place?

Wouldn’t that make her a pre-emptive denier? (We’ll ignore the long, sad story of the election denialism that brought her to national prominence in the first place.)

Joe Biden’s been mouthing similar rhetoric, suggesting that Republicans will refuse to concede their losses in tomorrow’s election.

Borup doesn’t express any concern about an American president saying such things.

Remember: Georgia’s the state where Joe Biden, the Democratic Party, the media, and Atlanta-based corporations like Coca-Cola and Delta Airlines accused Republicans of installing “Jim Crow 2.0,” “Jim Crow on sterioids,” and even “Jim Eagle” with their 2021 voting reform laws.

Those reforms produced record turnout in the first statewide election after they went into effect.

Who was questioning democracy in Georgia?

Who was lying about threats to democracy there?

Who was actually driving a “death spiral” of mistrust?

Was it the Republicans who enacted voter reforms that increased voter participation?  Or was it the very fine, very smart men and women—including the President of the United States—who compared those reforms to the segregationist policies of the old south?

Segregationist policies, I should add, that were imposed by Democrats.

I’m sure there are lousy Republican candidates out there: there always are.  There are also surely plenty of lousy Democratic candidates, as always.  (Definitionally, I’d say, but that’s just me.)

But I absolutely and energetically disbelieve in almost everything being said by the establishment media about the election right now.

And as I noted yesterday, I’m hardly alone in that: it’s a belief (or disbelief) shared by more than 70% of American registered voters.

Birgitte Borup seems to be doing her best to achieve similar numbers in Denmark.

With this editorial she’s off to a fine start.

Who knows. I’m hardly an expert—I’m not studying individual campaign races and I don’t have access to any special information—but from the data and insights I’ve seen, heard, and read from sources I trust, I’ve got a feeling the Republicans are going to win both chambers of Congress, gaining around 25-30 seats in the House and two seats in the Senate. Maybe three.

That would make it the smallest midterm flip going back more than forty years (ignoring Bush’s 2002 midterms, which were anomalous for a very obvious reason).

Nothing extraordinary about it. Certainly nothing to get all “wee-wee’d up about,” as Biden’s old boss might say.

There’s a breathing in and a breathing out in American politics, as in everything else, and I think everyone’s making a much bigger deal out of the “red wave” than circumstances actually warrant. Presidents tend to overreach in the first years of their first terms, and they tend to get punished for it in their first midterms. Considering the scope of the Democrats’ overreach, a loss of 25-30 seats strikes me as an exceptionally mild punishment. Obama lost more than 60.

Like I said, that’s just my own stupid guess.

But I can and will make two predictions with great confidence:

Tomorrow will not be the start of a second civil war, nor will it herald the death of democracy in America.

Featured Image: Screenshot from The Simpsons.

Feedback on the audio: I think the current format works quite well, and I did not notice any decrease in quality caused by your one-take approach. Keep it up and improve on what you are currently doing, rather than make any premature changes.

Not much to add on the content side. Pretty much completely in agreement all around.

But I would like to note with sadness the decline of Rob Reiner. Yes, he was always left leaning, even back when he was mainly known as Meathead in All In the Family, but he wasn’t deranged. Or if he was, he didn’t let it interfere with his work.

And in between, for a brief period of about 8-9 years (1984-1992) he directed some of the most enjoyable, fun, rewatchable and quotable movies of that era: This is Spinal Tap, Stand by Me, Princess Bride, When Harry Met Sally. And in the early 90s, Misey and A Few Good Men also remain very solid movies, but then something went wrong. North from 1994 was a hopeless mess, the American President – while enjoyable for what was a trial run for Aaron Sorkin’s political fantasies as they would play out on The West Wing – was where his liberal leanings essentially took over (Richard Dreyfus’ Republican villain is in essence just a cartoon). And from there, it just spiraled downhill, with a few kinda enjoyable minor pieces here and there (The Bucket List). And now he is just another of the endless Twitter celebrity activists/idiots.
Which makes me a bit sad.