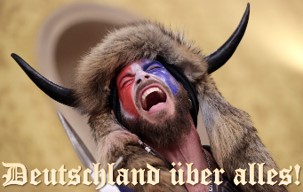 AUDIO NOTE: I was just wrapping this up and getting ready to record the audio when Eldest’s screams of anguish from the shower alerted me to the fact that we have no hot water… in our faucets or our radiators. Our boiler is not cooperating with my requests that it play nice. So I reckon I need to get serious about all that instead of recording a blog post.

Big news in Germany the other day.

I began to write about it the day it went down, but life had other plans for me. (Good ones, but time-consuming.)

Here’s how the headlines looked in Denmark as the story broke:

TV2 News: “Raid against suspected terror network in Germany—plans of a coup d’état.”

Politiken: “At least 25 right-wing extremists arrested for plans to storm the German Reichstag.”

Obviously a coup d’état in Germany would be a dangerously destabilizing event. It would shake Europe to its core—Germany is the keystone of the European Union.

A coup in that country would therefore have a dramatic impact on everyone in Europe—including myself, making it especially serious.

A planned coup might therefore be said to represent a threat to the entire European order.

But that’s only if the plans are real and there are legitimate reasons for believing the plotters pose a real threat. “Real” as in credible and imminent, as opposed to “hypothetically possible, eventually.”

The facts we’ve been presented with present us with some head-scratchers.

We’re told, for example, that 3000 officers were involved in making 25 arrests. That’s 120 officers per arrest. Does that even sound logistically possible? The Boston Globe (link is also from the first hours of the story) said the officers conducted searches at “130 sites in 11 of Germany’s 16 states,” which works out to 23 officers per site (assuming the raids were carried out simultaneously).

No matter how you slice it and dice it, that’s some pretty heavy-handed shit.

Was it warranted? The alleged conspirators were apparently planning an “armed attack on institutions of the state” (according to the Globe) or “a takeover of parliament” (according to most of the Danish sources).

Were the 25 people heavily armed and gathered together in Berlin and getting ready to take over parliament at any moment? Or were they a bunch of fever-swamp conspiracy nuts scattered all over Germany, fantasizing about the glorious Germany of tomorrow being exactly like the fabulous Germany of 1873?

A lot of reports, including a radio report I heard on ABC News that day, emphasized that these guys subscribed to a lot of conspiracy theories…. including Q Anon.

That’s still one of the key points being pushed by ABC News on the radio.

That’s the world we live in: our media try to make a potential German coup sound even scarier by tying it into Q Anon. Were they wearing red baseball caps?

ABC News is also reporting that “it’s believed” (no indication of by whom or on what basis) the plotters were “inspired” by the “insurrection” in the United States on January 6, 2021.

That would mean the alleged German conspirators were inspired by the Democratic and media narrative about January 6th.

In any case, isn’t the whole Q-Anon thing about Trump coming back to power in America and bringing justice to the pedophiles and cannibals permeating Congress? Something like that? There was some guy called Q delivering cryptic messages to dark corners of the internet about Trump’s imminent reclamation of the White House, and his followers used some kind of slogan paraphrased from The Three Musketeers. What in hell would get German nationalists worked up about something like that?

“We must save our fatherland from the cannibals, pedophiles, and lizard people that have already conquered America!”

Maybe I’m being unfair. What if each of these 25 guys (and gals?) was actually directing a cell of another 25 guys (and gals), each of whom was in turn commanding a squad, a section, a platoon? That could quickly amount to thousands of insurrectionists—certainly enough that if they were well organized and heavily armed they could perhaps take physical occupation of the Bundestag.

There are 83 million Germans, and the majority are socialists or social-democrats. They’re all just gonna roll over and swear allegiance to the armed incursionists who just kidnapped their parliament?

“These guys seem cool, let’s give ’em a chance once we’ve buried all the people they killed.”

Acccording to the Globe’s account, even a German Green Party parliamentarian put out a message on Mastodon (of course): “More details keep coming to light that raise doubts about whether these people were even clever enough to plan and carry out such a coup.”

Obviously they weren’t or we’d be talking about the German coup instead of the German raids.

Twenty-five people would have to be pretty damn clever indeed to overthrow the government of the most powerful country in Europe. It’s not impossible, I guess: a century ago Germany sent a single deluded loser into Russia via a sealed railroad boxcar and next thing you know that maniac had transformed Russia into the Soviet Union.

What could possibly be more deluded than thinking you and two dozen of your fellows are capable of overthrowing a government that employs more than 5.1 million people? How deluded do you have to be to think that a country as leftist and “green” and Germany is going to willingly submit to a government that’s installed itself by force and hasn’t even purchased the necessary carbon offsets to do so? How deluded to think that your little gang of 25 is going to be able to muster the necessary force to install itself to begin with?

Don’t misunderstand: that doesn’t mean they’re not dangerous. Were even just a couple of heavily armed morons to attempt to overthrow anything—parliament, the registry of motor vehicles, the corner bakery—they could cause enormous damage and loss of life. Look what just one pyscho was able to do from a hotel room in Las Vegas just a few years ago. So by all means get these guys off the streets and into custody.

But can we stop pretending they represented an actual threat to the Federal Republic of Germany (population 83 million)?

Because then we’d have to stop pretending that a few hundred overheated and unarmed boneheads flooding the American capitol building represented a serious attempt to overthrow the world’s oldest, most powerful, and wealthiest democracy.

And we will never be permitted to stop pretending that.

So fair enough: raid these losers and lock them up to keep all the narratives safe.

But then it’s time to put some of the other narratives into play.

Where, for example, are the reassurances from all of these government and news sources that not all conservatives, not even all fever-swamp conspiracy-swilling Q-Anon whack jobs, are violent extremists?

Why instead does everyone from the lowliest copy writer at the dreariest establishment daily all the way up to President Joe Biden use the acts of these few as an indictment of the many?

(And given that they do, why don’t we on the right do the same? Why don’t we run around with our hair on fire warning against the dangers of the Democratic Party, whose members burn cities down and murder civilians and law enforcement officers in cold blood and are always disrupting Congressional hearings and have even been known to storm the Supreme Court? They’re un-American! Semi-Fascist! A threat to democracy! They’re sick, sick! — wait, wait, I know why we don’t: because if we do, we’re dangerous un-American semi-fascists who represent a clear and present danger to the United States…)

Ignoring the parenthetical digression: any time there’s any act of violence perpetrated by an Islamist, we’re all solemnly told that one or two or a dozen Islamists don’t represent all Muslims—that Islam is in fact a religion of peace, and what we really need to worry about is the possibility of a “backlash” against innocent Muslims.

Why no such language about conservatives? Why do none of these breathless reports about the crazy German Q-Anon conspiracists warn against ordinary German conservatives?

I’ll tell you why: because the whole point of those breathless reports is to incite a backlash.

After all, we have ample evidence of how the GLOB behaves when it wants to prevent a backlash, and that’s not at all how they behave whenever it’s someone they can identify (however loosely or inaccurately) as somehow associated with the political right.

Generally, in fact, you can discern the ideological association of any evil-doer based on how long the establishment media keep their story afloat.

Kyle Rittenhouse shot his attackers in self-defense, killing two and wounding one, and the story was on top of the news forever. (And the jury acquittal meant nothing, except as proof that the American justice system was an undemocratic den of right-wing semi-fascists.)

But quick: can you tell me the name of the guy who deliberately drove his SUV into a Christmas parade, killing six and injuring 62 entirely innocent people? He actually bubbled up into the news briefly just a few weeks ago as his trial took place.

Who was the worse person? Who did the worse thing? And yet… whose name do you know?

Nancy Pelosi’s husband was, we all know, brutally attacked by a deranged right-winger inspired by the bloodthirsty tirades of Tucker Carlson, who is perversely still permitted to issue his irritating girlish laughter from a prime-time program on the demonic Fox News. How much blood must be spilled before we can silence Tucker Carlson?

The people who lit whole American neighborhoods on fire and caused dozens of deaths and hundreds of injuries and billions of dollars in damage during the George Floyd riots—they were independent actors, maybe even rightwing infiltrators trying to make the leftist protesters look bad. (Remember umbrella man? It couldn’t be actual leftists tearing Minneapolis to shreds, so it had to be a right-wing agent-provocateur: who else but a right-wing agent provocateur would have an umbrella?)

That’s despite the fact that Molly Ball’s infamous Time article makes it clear that the BLM protesters (and presumably their more violent accomplices) were willing to take orders to stand down from the friendly “cabal” of activists busily “fortifying” the election to ensure the “proper outcome.”

Almost as if the protesters and rioters (and arsonists and looters and vandals and murderers) were acting at the pleasure of the Democratic establishment. Almost as if they were being used as a political tool.

So forgive me for not hyperventilating about the danger to European democracy posed by a bunch of German losers.

If European democracy is following in the tracks of American democracy, it’s already half-dead anyway.