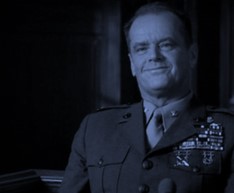 In the most (and maybe only) memorable line of the movie A Few Good Man, the character Colonel Jessup (Jack Nicholson) lashes out at Lieutenant Kaffee (Tom Cruise) from the witness stand: “You can’t handle the truth!“

In the context of the movie, he’s saying that comfortable civilians are incapable of handling the reality that their comfort depends on rough men standing ready to do violence on their behalf.

Jack Nicholson’s iconic delivery of the line got him an Oscar nomination for best supporting actor. (He lost to Gene Hackman, who won for Unforgiven.)

The line became a meme before memes were a thing—even before it was a thing to say something was a thing.

LTJG Kaffee: I think I’m entitled to them.

LTJG Kaffee: I want the truth!

Son, we live in a world that has walls, and those walls have to be guarded by men with guns. Who’s gonna do it? You? You, Lieutenant Weinberg? I have a greater responsibility than you can possibly fathom. You weep for Santiago, and you curse the Marines. You have that luxury. You have the luxury of not knowing what I know—that Santiago’s death, while tragic, probably saved lives; and my existence, while grotesque and incomprehensible to you, saves lives.

We use words like “honor,” “code,” “loyalty.” We use these words as the backbone of a life spent defending something. You use them as a punch line.

I have neither the time nor the inclination to explain myself to a man who rises and sleeps under the blanket of the very freedom that I provide and then questions the manner in which I provide it.

I would rather that you just said “thank you” and went on your way. Otherwise, I suggest you pick up a weapon and stand the post. Either way, I don’t give a DAMN what you think you’re entitled to!

I open with that cinematic reminiscence because an article in Friday’s Berlingske examines the question of whether or not we can handle the truth.

The article itself is actually describing an exchange on a Berlingske podcast in which the editor-in-chief of the weekly newspaper Weekendavisen (literal translation: “the weekend newspaper”) Martin Krasnik debated Margrethe Vestager, an Executive Vice President of the European Commission and former Danish government minister as a member of the Radikale party, on the topic of the EU’s having banned Russia Today and Sputnik from the EU.

“Firstly, it’s old-fashioned that the EU bans Russian propaganda from two state (television) channels, because propaganda takes place all over social media in every possibly way. Secondly, there’s a built-in distrust of EU citizens. It’s this notion that they’re simply unable to see through it themselves, and it also means that we don’t get a clear and distinct insight into how the Russians carry out propaganda,” says Martin Krasnik, who believes that the EU “perceives EU citizens as children.”

“Thirdly, it gives an excuse to autocrats or dictators who themselves censor wildly, including our own free media and broadcasts to their parts of the world. They can say: Look, you do it yourself. You censor yourselves, hypocrites.”

(Krasnik) believes that the sanction against RT and Sputnik “is part of a larger complex, where the EU isn’t a staunch defender of freedom of expression.”

Vestager’s defense is even more succinct:

“We did it because we believe that this is hybrid warfare, and the way of manipulating our thinking is completely integrated with the drones and missiles that the Russians are sending down on Ukrainian citizens. The two things are completely connected,” said the commissioner.

The host of the podcast asks her why they’re connected:

“Because it is so important for the Russians to have a European openness to the idea that they could actually be a tiny bit right. That the Russians were perhaps victims of the fact that Ukraine would like to be more European. So therefore the propaganda and manipulation from the Russian state-owned media is completely integrated into the rest of their warfare.”

(The podcast host) Mette Østergaard further asks whether it would not be an advantage if the citizens of the EU themselves could be allowed to be critical of the Russian propaganda. Margrethe Vestager replied to that:

“It’s just manipulation…. It has nothing to do with freedom of speech. We are exposed to warfare, and then you can find all sorts of information about Russian propaganda in all sorts of other places. But that you don’t want to commit to the part of the warfare that is aimed directly at our brains, and where you know that it works 100 percent, I think that’s … I think that’s a really, really important discussion.”

When you boil it all down, it comes down to one of the central conflicts of our age: is censorship necessary?

Can we handle the truth?

Krasnik not only believes that we can handle the truth, but implies that the EU’s lack of trust in its own citizens’ ability to differentiate truth from fiction may be a more significant problem than any Russian propaganda.

In recent years the western left has gone all-in on censorship, always for our own good. Their argument in most cases isn’t that we can’t handle the truth, but more often a variant of our being unable to recognize or understand it—or being too gullible or stupid to be left to our own devices.

Are we free and autonomous citizens governing ourselves by means of representative governments, or are we merely the wards of a benevolent state?

That’s the central question of our era. Everything else is derivative. The climate, energy, inflation, vaccines, masking, lockdowns, Ukraine, Twitter, transgenderism: those are all just different facets of the same carved stone, and that stone is the question of where human sovereignty belongs: with the individual or with the collective.

Martin Krasnik thinks European citizens are free and sovereign individuals entitled to make moral, political, and social judgments of their own—and even have the right to be wrong.

Margrethe Vestager thinks European citizens are helpless children too dimwitted to resist even the clumsiest propaganda.

Those are radically different visions and it’s not clear to me they can ever be reconciled. Either each of us is our own master—or we answer to someone else.

The forces of collectivism are ascendant in the west. Certainly it’s mostly a well-meaning, good-intentioned, smiley kind of collectivism: all of it exercised for our own good, our own protection, our own welfare.

But once the structures of even the most benevolent collectivism are in place, it doesn’t take long for its controls to fall into the wrong hands. (And given enough power, there are no right hands except for those prepared to hurl the ring into the lava of Mt. Doom.)

The debate is not inconsequential.

Can we handle the truth?

“ If we are to be mothered, mother must know best. . . . In every age the men who want us under their thumb, if they have any sense, will put forward the particular pretension which the hopes and fears of that age render most potent. They ‘cash in.’ It has been magic, it has been Christianity. Now it will certainly be science. . . . Let us not be deceived by phrases about ‘Man taking charge of his own destiny.’ All that can really happen is that some men will take charge of the destiny of others. . . . The more completely we are planned the more powerful they will be.. . . .
Of all tyrannies, a tyranny exercised for the good of its victims may be the most oppressive. It may be better to live under robber barons than under omnipotent moral busybodies. The robber baron’s cruelty may sometimes sleep, his cupidity may at some point be satiated; but those who torment us for our own good will torment us without end for they do so with the approval of their own conscience. They may be more likely to go to Heaven yet at the same time likelier to make a Hell of earth. Their very kindness stings with intolerable insult. To be ‘cured’ against one’s will and cured of states which we may not regard as disease is to be put on a level of those who have not yet reached the age of reason or those who never will; to be classed with infants, imbeciles, and domestic animals.”
—C. S. Lewis, God in the Dock

Turned out it was Big Mother, not Big Brother.

Heh… I was going to include Lewis’s moral busybody quote but have cited it so many times I felt a little squeamish about throwing one more log on that bonfire. (Like readers would be all, “God, Greg, do you have any other quotes?”) But it is 100% spot on appropriate to this topic and I’m glad you’ve connected it to this post!

I also think of NIetzsche’s line from Zarathustra: “State is the name of the coldest of all cold monsters. Coldly it lies; and this lie slips from its mouth: ‘I, the state, am the people.'”

As for Big Mother, my whole criticism of 1984 all along was that people aren’t masochistic enough to put up with a boot on their actual face for long. The most “successful” monsters are those that can pass for normal. (“He was such a polite, quiet boy…”) My own prediction has therefore always been not a Big Mother but a Big Bunny, or some other happy smiley huggy plush toy of a virtual leader.

Big Brother says do this or I stomp you.

Big Mother says do this, please, because it’s what’s best for you, and I’ll be so disappointed in you if you don’t, and then we just might have to talk about your allowance or your curfew, and we don’t want that, do we, sweetie?

Big Bunny says isn’t it fun to do this? See how much fun! Everyone wants to do this! Come on, do it with us, it’s so much fun! And it’s good for us! Whee! Hee hee hee!… while his minions go about silently shivving everyone who doesn’t play along.