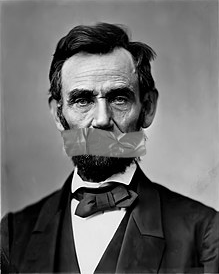 America has, for better or worse, a two party political system. Other parties exist, and some are even quite strong in individual states (consider Senator Bernie Sanders’s socialist following in Vermont), but at the national level American politics is binary: Democrat and Republican. There hasn’t been a president from any other party since Millard Fillmore of the Whigs left office in 1853.

Because a nation of 320 million people divided into fifty states across a vast continent cannot easily or neatly be divided into just two blocs, each of the two major political parties is a great tent beneath which there are many smaller groups with differing interests, ideals, and beliefs.

Pierre Collignon is trying to make the case for a particular splinter group within the Republican party that made up about 6% of its membership the last time I checked the stats (about two weeks ago): Never Trump conservatives.

Collignon’s column is entitled “Is this the kind of president a real conservative can support?” That’s also the second-to-last sentence of the column. The last sentence is a single word:

Pierre Collignon may have been a fan of Ronald Reagan and a great defender of Bush père et fils, and he’s clearly pleased with many of Trump’s policy accomplishments (although, as I noted last week, he’d have liked them a lot better if they were just a little more liberal), but like all the other Never Trumpers given so much ink and air time and pixels by the Danish media, he believes that Trump is too divisive, dishonest, and narcissistic to deserve the support of real conservatives.

In English: “Conservatives in both the U.S. and Europe have to cut through the propaganda war over the person of Trump and relate themselves to the relevant question: Have the past four years shown that Trump possesses the necessary calm, principledness, and honesty to carry out the office?”

That’s a little weird: we have to ignore the propaganda war over Trump the person to focus instead on how calm and principled and honest he is. It’s like Collignon’s reading my mind, though, because a moment later, he sharpens the question a little:

(“What we need to address is the reality about Trump, which is well documented: What are his results? And how does he conduct himself as president?”)

And here Collignon turns to the results.

He starts by giving Trump credit for an economy that was popping on all cylinders up until March, creating record employment among minorities and the poorest Americans. Internationally, he credits Trump for getting Europe to invest in its own defense; for setting a China-critical agenda; for a useful reboot in the Middle East; and for checking Iranian aggression with the targeted airstrike that killed the monstrous Qassem Soleimani. Collignon also acknowledges that these are hardly Trump’s only positive accomplishments (Supreme Court? Deregulation? Lack of overseas military combat deployments? Tax reductions? Pressure to decriminalize homosexuality around the world?), but abruptly states that they “kan i hvert fald ikke overskygge hovedproblemet: At han er et troløst menneske, som agerer ud fra narcissistiske impulser og gerne ofrer USAs allierede og idealer for sin personlige vinding.”

English: “they cannot, in any case, overshadow the main problem: That he’s a faithless person who acts on narcissistic impulses and willingly sacrifices America’s allies and ideals for personal gain.”

As examples, he cites James Mattis, Dan Coats, and John Bolton’s various complaints about Trump, and they certainly have their share of gripes. Then he jumps right into the Nancy Pelosi talking points:

Trump spoke, as they say, infelicitously in Helsinki, but in retrospect, I think it’s understandable that Trump may have had reservations about an intelligence service that we now know to have been working against him, seeking to undermine him at every opportunity and even frame him and the members of his campaign and administration for crimes they did not commit. Even so, I, too, would have preferred to see him handle that with more finesse.

I’ve read and reread the transcript of Trump’s “perfect conversation” with Ukraine and hardly see the “mafia boss” behavior so clear to Collignon: maybe he could direct our attention to the particular part of that transcript just so we’re sure he hasn’t got it mixed up with Adam Schiff’s over-the-top (and entirely fictitious) account of it?

And as for hints of withdrawing from NATO: Collignon has already acknowledged his approval of Europe spending more on its own defense. Is he not willing to at least entertain the possibility that Trump’s talk of withdrawal may have had something to do with that?

(“Add to that Trump’s active efforts to undermine international fora like WHO, WTO, the UN, and the EU. Ventre’s previous defense minister Claus Hjort Frederiksen has expressed it like this: ‘Trump’s politics are, plainly stated, a mortal danger to all of us.'”)

I don’t consider criticism of or even opposition to those bodies as they exist today to be inconsistent with conservatism. American conservatives tend to put a high premium on national sovereignty (just as we put a premium on individual sovereignty). We’re surprised when other countries aren’t. I’m sympathetic to Danish dependence on the supranational organizations to which it belongs, because as a very small country surrounded by larger and historically aggressive neighbors, we have, like Blanche DuBois, “always depended upon the kindness of strangers.” Strangers aren’t very kind, so it’s good to have them tied down with treaties to the extent that’s possible, even if ceding little bits of sovereignty is the price.

But just for kicks, remember this?

That’s the famous tweet from January 14th of this year in which the WHO announced to the world that China said there was no clear evidence of human-to-human transmission. (22,700 likes: must be all those real conservatives!)

The most charitable case to be made is that the WHO believed what China told them, and that China believed what they were saying when they said it. That’s more charity than a tolerably intelligent person ought to be asked to grant. Imagine how much more prepared the world might have been had the WHO been a little more skeptical of China, or had we all been a little more skeptical of the WHO.

As for the WTO (emphasis mine):

The appeals system is now at a breaking point after years of U.S. pressure. The Obama administration drew criticism from many members for a May 2016 decision to block the reappointment of a South Korean judge to the WTO’s Appellate Body, the first time any country blocked the appointment of another country’s judge. Trump has continued to block new appointments, and on December 10, 2019, the Appellate Body became unable to hear appeals since the terms of two more judges expired and the number of active judges fell to one.

Funny how so many of Donald Trump’s “norm-destroying” actions were foreshadowed by the Obama administration…. “kids in cages,” anyone? “Muslim travel bans?”

(Maybe that’s Collignon’s point: that because Obama did so many of these things, they can’t really be conservative?)

(“A lot of American conservatives continue to back Trump because they see him as a bulwark against a radical left that’s gone amok with toppling of statues and defunding police forces. But not all.”)

It isn’t just the toppling of statues and defunding of police that the radical left has gone amok with, but we’ll come back to that in my thrilling conclusion. For now, let’s see where he’s going with this “but not all…”

No need to translate: he’s just pointing out that two writers at the late William F. Buckley’s National Review believe that Trump is a gift to the radical left, because as long as he’s sitting behind the Resolute Desk, they can build on the impression that the only alterntive to their insanity is Trump’s “intolerance.”

Ah, the famous “intolerance” of Donald Trump. Want to hit us with a few examples, Pierre? You might also note that there are still plenty of “real conservatives” at National Review with plenty of conservative reasons for supporting Trump… like a piece from Jack Fowler called “Biden, Never.”

“Racist provocations that give the nation an ugly face.” Wow! They must be truly awful. So I’m sure he’ll tell us what they are now.

(“It also doesn’t unite the nation when Trump sows doubts about his willingness to accept the election results on November 3rd, or when he incites violent groups to ‘stand by’, or speaks with gross disparagement of his political opponents, or simply utters total untruths.”)

Okay, so we’re not going to get examples of his awful racist provocations, so I guess we just move on to… the liberal and Never-Trump spin. (Although, seriously, if we’re going to condemn candidates for saying mean things about their opponents or lying, who the hell are we ever going to get into office from any party?)

(“Trump is dividing the nation and vandalizing the political culture. He’s pulling American democracy toward chaos, violence, and strife. And he’s undermining America’s moral leadership of the world.”)

You hear this a lot: how divisive Trump is. But the people who seem the most worked up about it don’t seem to have functioning eyes or ears. Never before in American history has a president come under attack from his political opposition and the media with such ferocity, and such vicious fury, from before he even took office. Trump didn’t tell Democrats to call themselves the “resistance” instead of the “loyal opposition.” He didn’t tell the nation’s establishment media to abandon (the pretense of) objective reporting for wild partisan subjectivity. He certainly didn’t tell the law enforcement and intelligence agencies of the federal government to spy on his campaign and administration; he didn’t force high-ranking Democrats to publicly promote the existence of evidence of Russian collusion that they acknowledged under oath didn’t exist. He didn’t call on his supporters to harass Democrats in restaurants, movie theatres, and grocery stories. And so on.

Division’s a two-way street, and the Democrats have been very, very busy on their side of that avenue.

But let’s get to the kicker:

“Is this the kind of president a real conservative can support? No.”

Given the binary nature of American politics, the choice on Tuesday is between Trump and Biden. Period. That’s the choice that all of us, even “real conservatives,” have to make: four more years of Trump, or four years of Biden (or a few months of Biden followed by a few years of Harris).

Four years of Biden are unlikely, given the man’s apparent frailty, but let’s imagine he actually makes it that long. Let’s also assume that the fact of a Biden victory at the top of the ticket has coattails long enough to strengthen the House majority and flip the Senate over to Democratic control.

Here are some of the things that we can look forward to:

Trump is rude, crude, and unstatesmanlike. But he’s obeying the law and advancing conservative causes.

Biden is at best off his game, weak and frail. And he’s backed by a progressive coalition determined not just to crush conservatism completely, but to rig the system against it. Forever.

I’m just not sure they realize that that something is liberalism.