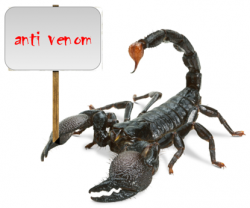 Most people know the fable of the frog and scorpion.

A scorpion asks a frog to carry him across the river.

The frog sees the logic of this. He agrees to let the scorpion climb on his back and then sets across the river.

Midway, the scorpion stings the frog.

“Why?” the frog asks with his dying breath.

“It’s my nature,” says the scorpion.

It’s a useful parable when looking at the uglier side of human nature: people sometimes lash out at others even to their own detriment.

A useful parable that way, but irrelevant to my purposes. I’m not interested in the scorpion. I want to know more about that stupid frog.

It’s a lesson the establishment media seem to be struggling with, as this article from (taxpayer funded) DR makes clear:

As usual, DR is taking its cue from the New York Times (which believes Donald Trump is the greatest threat to America since 1945):

Seems like an accurate assessment for civilian life in D.C.: heads you lose, tails you lose.

But why? Why on earth are American shops all around the country preparing for an election with the kinds of precautions usually reserved for hurricanes? And why is chaos expected regardless of who wins?

And why is the chaos, the violence, the unrest, always spoken of passively, as though it were a force of nature rather than an act of human agency?

Hurricanes happen. (Although hardly ever in Hartford, Hereford, and Hampshire.) Blizzards and monsoons happen. Earthquakes, tornadoes, tsunamis, and volcanoes happen.

Riots are perpetrated by human beings.

In a way, the whole story can be told in two tweets (Richard Grenell is the former Acting Director of the United States National Intelligence; Wolf Blitzer is a CNN entertainer who was once a journalist):

The American establishment media have been downplaying, minimizing, and dismissing the violence plaguing American cities for almost half a year at this point. We were told they were “mostly peaceful protests” even as entire neighborhoods were burning to the ground and scores of cops were being hospitalized. Joe Biden himself said at the final debate that antifa was “just an idea.”

They were coddling the scorpion because they didn’t think they’d get stung. The scorpion would only sting the Bad Orange Man and his minions.

Saieth the Frog: “Okay, but you really hate Trump, right?”

There needs to be total clarity on something that both DR and the Times neglect to mention: these businesses aren’t being boarded up for fear of Trump supporters. There’s no fear of right-wing riots, arson, or looting. Everyone knows where the violence is coming from, but no one in the establishment media seems willing to say it out loud. Acknowledging the Scorpion would mean acknowledging how desperately and willfully the Frog has been ignoring it, if not encouraging it, for all these many months. Billions of dollars in damage, hundreds of businesses destroyed, god knows how many people injured, and close to twenty dead, all from the militant left.

You will search the Times article in vain for any mention of where the violence is expected to come from: they offer only a few faint indicators by way of misdirection:

Worries about unrest around the election have been fanned by President Trump, who has declined to say whether he would agree to a peaceful transfer of power if his Democratic challenger, Joseph R. Biden Jr., is victorious.

That’s a dishonest spin on what the president has said on this subject, but forget it Jake, it’s the Times. The point is, the writers were able to attribute the violence of their beloved arsonists and looters to Trump. He “fanned the flames of the worries about unrest around the election.”

Think any “worries about unrest around the election” may have been fanned by six months of very real violence, arson, looting, and vandalism from the left? By entire metropolitan police departments being ordered to stand down while their cities devolved into anarchy?

Protests flared again this week after Walter Wallace Jr., a Black man with mental health issues who was carrying a knife, was killed by the police in Philadelphia. That set off looting and clashes with the police in parts of the city.

Wallace’s family have stated that they don’t want the police officers who shot him to face murder charges. The man was mentally ill and they don’t blame the officers for reacting as they did. The violent mob, whose anger has been fanned by the establishment media, showed less understanding than the man’s own family.

And “a black man with mental health issues who was carrying a knife” isn’t quite the whole story, is it? (I don’t want to link to the disturbing video, but you can find it easily enough if you want to.)

This year, businesses have already sustained at least $1 billion in insured losses from looting and vandalism largely set off by the killing of George Floyd by a Minneapolis police officer in May, according to one estimate cited by the Insurance Information Institute, an industry group.

Businesses have sustained “losses from looting and vandalism.”

Looting and vandalism, falling like summer rain across the land. No human agency at all.

Another way of phrasing that might be, “Vandals, arsonists, and looters have inflicted over a billion dollars worth of damage already this year.”

But then the reader might want to know about those criminals: who are they?

The nation is not bracing for “unrest related to the election.” It is bracing for (more) violence from the left.

But don’t say it out loud… the Scorpion might get angry and turn on you.

I covered this concept a few weeks ago, but it bears repeating: to the extent there are any right-wingers out there prepping for violence, it is because of the left’s violence. It is a reaction that has been summoned into existence by the arson, looting, vandalism, and assaults of the left.

But never mind all that: Politiken knows where all the violence is coming from:

This is beyond gaslighting. The far left has been rioting for months across America and has vowed to riot if Trump wins. Everyone, and I mean everyone, knows damn well who’s going to be responsible for any smashing and burning and looting that may occur on or after Election Night, because everyone knows damn well who’s been doing all the smashing and burning and looting all year.

And the establishment media in America and Denmark continue to play dumb.

All of this helps me finally understand why that stupid, stupid frog believes the deadly lie of the scorpion:

Because it’s his nature.