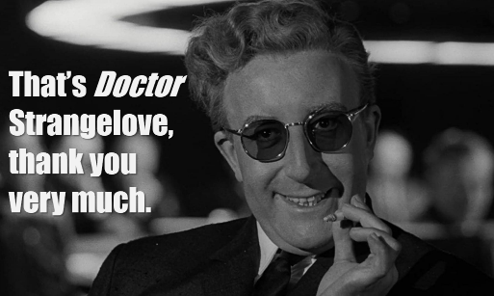 The American chattering class has been entertaining itself for the past couple of weeks with Jill Biden’s insistence on being addressed as Doctor Jill Biden. The right has been mocking her for it, the left has been attacking that mockery as sexism.

Is There a Doctor in the White House? Not if You Need an M.D., Joseph Epstein, Wall Street Journal, 11 December

Inside the title fight: The war of words over Dr Jill Biden points to an unfair history, Tiger Webb, ABC.net.au, 20 December

Social media have been lit up on the issue as well, and whether that’s a cause or effect of the over-the-top news media coverage is hard to say.

DR has had nothing to say on the subject, but the “borgerlig” Berlingske weighed in with an article on December 14th: “Er Joe Bidens hustru overhovedet doktor? Spørgsmålet satte en lavine i gang på internettet” (“Is Joe Biden’s wife at all a doctor? The question has started an avalanche on the internet“). It’s everything I’ve come to expect from Berlingske’s American coverage: it presents a couple of clips from Epstein’s Journal piece then cites all the Democrats and leftists who’ve come out against it. It doesn’t even provide the all-important cultural context that plenty of Americans of every political persuasion believe that the appropriate title for people who never went to medical school but insist on being called “doctor” would be “asshole.”

(It’s not the title but the insistence that grates.)

Surely one reason there’s so much sound and fury around Jill Biden’s preferred title is that in this brutally eventful year the sheer meaningless of the issue is refreshing. The high emotions aroused are surely a consequence of Sayre’s law: “In any dispute the intensity of feeling is inversely proportional to the value of the issues at stake.”

I’m sorry to say I have no very strong emotions on the particular question of Jill Biden’s titular preferences.

Frankly, I’ve never understood Americans’ obsession with titles. The U.S. Constitution (in Article I, Section 9) expressly forbids the government from granting any titles of nobility, and prohibits anyone holding public office to accept titles of any kind from any foreign entity.

Weirdly, however—or maybe therefore—Americans obsess over titles of every kind.

We call former presidents “Mr. President” even after they’ve left office, and we do the same with senators, governors, mayors, and holders of other prestigious elective offices. Also judges. It’s a profoundly un-republican habit, and one that’s always rubbed my fur the wrong way. Messrs. Obama, Bush, Clinton, and Carter no longer hold any public office of any kind; calling them “Mr. President” until the day they die may be the tradition, but it’s a stupid and undemocratic tradition that undermines the idea of public office as a public service. It’s disgusting enough that our politicians miraculously become millionaires while working for relatively modest salaries; to bestow honorifics upon them for such grubbiness is grotesque.

While they’re in office, fine: the public entrusted them with a special responsibility, and the title is a valuable reminder that these men and women were chosen to represent more than just themselves: an entire town, city, state, or even the whole country. Out of office, they no longer represent anyone but themselves (and don’t they all do a fine job of that!), and therefore no longer warrant the honor of any title.

I understand the importance of rank within the military, which is necessarily hierarchical. For members of the military to address one another by rank helps reinforce that structure. But despite my respect for Americans voluntarily serving in our armed forces, I see no reason why civilians should be compelled to address military personnel by rank.

The clergy is also rife with titles. I don’t reckon I’m required as an American or a Dane to address priests, rabbis, imams, pastors, or their equivalents with the titles bestowed upon them by their coreligionists (of whom I am not one), but the customs there are religious rather than civil. And they need to be a little elastic, because you can’t reasonably expect, and certainly cannot demand, that members of any given religion should know and honor the titles of every other.

Among the professions, American custom generally grants lifetime titles only to one: medical doctors are addressed by the title “doctor.” That’s foolish enough in itself; that the only other group generally accorded that title are academics is absurd but unsurprising—it’s hard to think of a group whose sense of self worth is more disproportionate to their actual value.

Law enforcement personnel are often addressed as “Officer” while on duty (or while being ridiculed in Broadway Musicals like Officer Krupke), but I never knew a cop who demanded people call him or her “Officer” on all occasions.

In some cases I suppose coaches and chefs may like to be addressed or described as Coach or Chef even outside of their professional capacity, but only those at the very top of their field, and I have a hard time imagining the Twitterati going amok if someone were to call Bill Belichick “Bill” or Gordon Ramsey “Gordon.”

The medical profession is worthy of our respect, when it’s not trying to kill us, but I can think of no reason other than custom for addressing medical practitioners as “doctor.” Instead of arguing whether Jill Biden ought to be addressed as “doctor,” it might be worthwhile to flip things around and ask why on earth medical practitioners require or deserve a special title, and why people with advanced degrees should be addressed any differently than bakers, musicians, or plumbers.

One answer you’ll come across frequently if you bother poking around the Jill Biden kerfuffle—and I’d advise against that—is along the lines of “people work very hard for their doctorates, and the ‘doctor’ title is a show of respect for all that hard work.”

The article in the Berlingske provides one example of this genre:

“Dr. Biden earned her degrees through hard work and pure grit. She is an inspiration to me, to her students, and to Americans across this country. This story would never have been written about a man.”

(It certainly would have, if the man were a Republican.)

The idea that people should be called doctor because they earned degrees through hard work is just crazy stupid, no matter how much grit they’ve got and no matter how pure. Plenty of people do extremely difficult things worthy of our deepest respect without ever insisting we honor their deeds with a title, and who among us can honestly say that getting a doctorate is somehow harder or more respectable than anything else? It’s literally elitist (although you won’t find any Democrats asking wealthy white Dr. Jill Biden to “check her privilege”).

Here, as elsewhere, I find the brutal social egalitarianism of Denmark a healthy tonic. There’s a royal family, and they get their titles, but everyone else is on a first name basis.

We could use a little more of that kind of egalitarianism in America.

Not this phony-baloney woke nonsense: nothing could be less egalitarian than the insane hierarchy of grievances being promoted by the American left.

Take this U.S. News article about the American rollout of covid vaccinations as an example (my emphases):

“There are 50 states with 50 allocation schemes,” says Dr. Chris Beyrer, an epidemiologist and professor at the Johns Hopkins Bloomberg School of Public Health. But putting communities of color ahead of other groups for the vaccine is good public health practice, Beyrer says: They are canaries in the COVID-19 coal mine.

“If the uptake is low, the impact will be low,” Beyrer says. And given the complex plans to nationally distribute a groundbreaking vaccine that’s already in short supply, he says, “the devil is in the details.”

Ahead of the vaccine rollout, the CDC’s Advisory Committee on Immunization Practices acknowledged that mitigating racial inequities should be a factor in distributing the vaccine, and said allocation strategies “should aim to both reduce existing disparities and to not create new disparities.” CDC Director Dr. Robert Redfield underscored the need in a statement accepting the committee’s initial recommendation for priority groups, encouraging a future call to prioritize older people in multigenerational households.

“Often our Hispanic, Black and Tribal Nations families care for their elderly in multigenerational households and they are also at significant risk,” Redfield said.

That’s some serious weapons-grade Orwellian language being used to describe one of the most horrifyingly Orwellian policies to be implemented in my lifetime.

There’s a pandemic. We have a vaccine. Since we can’t vaccinate everyone simultaneously, our goal should be a strategy that prioritizes the most vulnerable and minimizes further spread of the infection. Period.

Am I wrong? Are there flaws in my logic? Am I overlooking something? Has my capacity for reason fled me completely?

Save lives by protecting the vulnerable and slowing the spread. That’s it. Right?

To say that “Violet people are twice as likely to be in one of the high-risk groups, so we need to vaccinate the Violets first” is racist and stupid. Target the highest risk group first, without reference to the color of their skin, then target the second-highest risk group, then the third, and so on. If the Violets are over-represented in those risk groups relative to their numbers in the overall population, who cares? A healthy young Violet isn’t at higher risk than, say an elderly, diabetic Crimson, and therefore shouldn’t be prioritized above the Crimson merely because there are more Violets than Crimsons in the highest risk group.

Every public official proposing any kind of racial ranking system for covid vaccinations should be removed from office immediately. They should be stripped of their credentials and publicly shamed. They are putting their own racial prejudices ahead of public health, and have therefore forsaken any right to hold their post.

And anyone supporting their idiocy deserves the full force of our fury and contempt.

Even if they’re doctors.