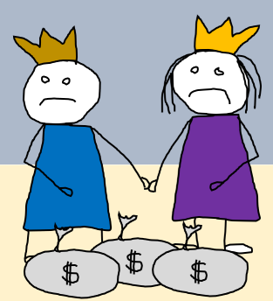 For most of my life, my contribution to any discussion of royalty was short and simple: Off with their heads.

I’ve mellowed with age and am now willing to acknowledge that a royal family can serve a valuable social function as long as it has no real political power. I heartily and sincerely support the Danish House of Glücksborg, for example.

Seeing the obsessive coverage of a couple of millionaire pseudo-royals interviewed by a billionaire celebrity yesterday, however, it’s hard not to fall back on my original republican sentiments.

Harry and Meghan are an embarrassment to the House of Windsor and to Great Britain, if not the entire human race. They’re disgusting people, grotesquely selfish, greedy, and grasping. They’re breathtakingly tone-deaf, they lack any self awareness, and nothing would give me more pleasure than their being stripped of all their money and privilege and forced to sustain themselves as civilians. Maybe they could open a sandwich shop or something. A little pub, somewhere. A gas station off the interstate.

That the poor dears were forced by the penury of their non-royal condition to whore themselves out to film and television for millions and millions of dollars is absurd. No amount of poverty forces anyone to sign a television contract. No one needs millions of dollars to survive. It was their craving for attention and money that compelled them.

(“But Greg, Buckingham Palace cut off the money for their security, and security doesn’t grow on trees!” True enough. Quick show of hands: how many of you have made it this far in life without a private security detail? “But Greg, they’re famous royals, even if they left the family. They’re celebrities! They’ve practically got targets painted on their backs!” Also true. And probably something they should have taken into account when they decided the duties and responsibilities of royal life were more than their little shoulders could bear. Their personal security is their personal problem: if they’re afraid their fame makes them targets, maybe they could have chosen a better new line of work than show business, and a better town to live in than Los Angeles. Play stupid games, win stupid prizes.)

That our sick and twisted culture is not just willing but eager to give them the attention they crave instead of the scorn and contempt they deserve is instructive—and depressing.

Everybody has a story to be told. Everybody. I have no doubt that life as royal in the world’s most visible monarchy is difficult, but so is life as a coalminer. So is life as a waitress. Life is difficult all the way around.

Two passages from CNN’s coverage of the interview stand out for me:

But the most powerful portions of the two-hour interview came when Meghan discussed the difficulties of her life as a working royal. Meghan, an American former actress, said she was forced to suppress her outspoken nature and give up her personal freedom. She said she did not have access to her passport, driver’s license or keys after she joined the royal family, and they were only returned when the couple moved away.

Hold on, wipe those tears away, we’re not done yet:

Meghan specifically complained of how lonely and isolated life became after her marriage. She said she wasn’t even allowed to go out for lunch with friends at times because she was too heavily covered in the media. “Everyone was concerned with optics,” she said.

And let’s add this little tidbit from the Guardian:

(Harry) said he stopped receiving palace money in the first quarter of 2020. He said that needing to pay for his own security costs was part of the motivation behind the couple’s lucrative deals with companies including Netflix.

The only other money he has left, he said, is what was left to him by Princess Diana.

Meghan said the pair were not being paid for the Oprah interview.

The Guardian snippet is probably the most galling.

“The only money I had left what was what my mother, the princess, left me, so I had to make a hundred-million dollar deal with a streaming company.”

That’s not to say that Meghan’s complaints aren’t head-slappingly stupid as well.

“I realized I was marrying into the most visible and scrutinized royal family on the planet, and probably the whole history of the human race, but they took my license, my keys, my passport, they wouldn’t let me go out to lunch with friends, I couldn’t speak my mind… it was all about appearances with them!”

Well, yes, dear. It would be. That’s all they have, the poor Windsors, is their appearance. It’s their job. Without it they have no function or value—or purpose.

I’m sure life as a national symbol is difficult, and it’s certainly not one I’d choose for myself or anyone I love, but if all that came as a surprise to her, she’s too stupid to warrant any sympathy. “You stuck your hand in the blender, dear? And it hurt, you say?”

Let’s not forget that this poor embattled creature who couldn’t bear the lack of privacy was complaining about this to Oprah Winfrey.

The Danish coverage isn’t any different from what I’ve seen from the Anglophonic world, and that’s a pity. With respect to royal houses, the House of Glückborg is a beacon of decency and decorum, while the Windsors have devolved into a third-rate Vaudeville.

The part of the interview getting the most attention seems to have been the claim that there was racism afoot in the royal house. Is her majesty the queen a racist? No, it can’t be her, Meghan set the queen apart very specifically: the queen was just wonderful, she said.

So who was it?

When Oprah pressed on which member of the Royal family asked about Archie’s skin color, both Markle and Harry declined to give specifics. “That conversation, I am never going to share,” Harry said when pressed by Winfrey. “At the time, it was awkward, I was a bit shocked.”

Well played, Harry. You’ve just tarred your entire family with the brush of racism, and by refusing to name the guilty party, you leave that stain on the rest of them. Now they’re all racists, all of them but you. Your grandparents, your father, your brother, your nephews and niece, and whatever other relations are knocking around Buckingham Palace.

Unless the entire family really is a bunch of racist jerks, in which case why not say so? Your vague aspersions demonstrate that you’re willing enough to slime your family—there’s one real racist and the rest of them are obviously just tolerating it—so it’s not like you can claim to be protecting anyone. Have the courage of your convictions. Have the decency to lift the stain of your accusations from the innocent.

But courage and decency are something with which Harry and Meghan have little to do. And they’re being very handsomely rewarded not to have any. The world being the world, and people being people, I’m sure we can look forward to decades of very public drama from this pair.

I can hardly wait.