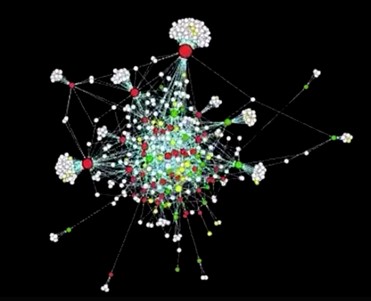 While the U.S. correspondents for most of the establishment European media have been covering the crisis on America’s southern border, to the extent that many of them run the risk of committing actual journalism, DR’s own ace correspondent Steffen Kretz has bigger fish to fry:

It’s a long article, and I’m tired, and it’s Kretz, so I’m just going to compress the article into a series of simple sentences.

Lenka Perron is an American woman who lives in Detroit. Kretz describes her as a “well-functioning, well-educated mother of three, with a good job.”

She supported Bernie Sanders in 2016.

(So much for “well-educated.”)

She was, like many Sanders supporters, angered by the way the Democratic party rigged the primary for Hillary.

Her anger and suspicion drove her to the internet.

Soon she was using hours of every day hunting down corruption and was, as our ace correspondent phrases it, “swallowed up by gloomy conspiracy theories.”

She couldn’t sleep, she says; she began to experience stress, her blood pressure rose, her doctor was worried. She was becoming an angry person, which she says she’d never been before.

She became addicted to conspiracy theories on social media.

And now she’s fighting to get Congress to change the way social media companies work.

There’s an 88-second video of her talking about all this.

“When Lenka Perron disappeared into a wormhole on the web,” the intrepid Kretz reports, “she suddenly found herself in the same distorted universe as many of the Trump supporters who attacked Congress in January. A place where white is black – and up is down.”

(He’s writing about conspiracy theories and says Trump supporters “attacked” Congress. I’ll buy that when he starts talking about the “attacks” antifa have been carrying out across the country, or the “attacks” Democratic activists carried out on the Supreme Court during the Kavanaugh nomination.)

In a word, Lenka Perron was suddenly sucked into the world of QAnon.

Her newsfeed just kept feeding her more and more conspiracy theories. They changed her perceptions of reality.

The narrative is interrupted here for a seven minute video backgrounder on QAnon. It’s pretty slick and not half as biased as most DR backgrounders on America.

When the story resumes we’re reminded that Lenka Perron lives in Detroit, which was once one of the great cities of America but is now is a hollowed out shell, a ruin. We’re not informed, as everyone should be, always, that this destruction was the consequence of decades of one-party leadership—by Democrats.

The article then breaks for a 61-second video that appears to be nothing more than a montage of Detroit’s ruins. I couldn’t get the sound to work. Maybe there is no sound. Maybe I’m more tired than I thought.

We’re told that factory workers in Detroit used to get good salaries, with insurance for the whole family, but now the few jobs left in Detroit don’t even pay enough to live on.

Then our ace correspondent pivots abruptly and a little weirdly to point out that right now a tiny elite have become extremely wealthy, and that this creates a huge level of inequality that creates anger and establishes the conditions for misinformation and conspiracy theories.

And he tells us that ground zero for all that is Silicon Valley, where the world’s biggest companies are the social media giants whose networks are now “overflowing with hate and extremism.”

To prove the point, he brings in Neil Johnson from George Washington University, who’s analyzed more than 100 million social media interactions to document how misinformation spreads.

Neil Johnson’s data is illustrated with a 59 second visualization in which interconnected nodes throb and grow and shrink and mutate. That’s literally all you see. And there’s no sound. We’re told the red blobs represent misinformation about vaccines, the blue blobs are “real information” about the vaccines, and the green blobs are “other users.”

That video could be 59 hours long, and it would leave me just as stupefied as I was after its 59 seconds. There are no numbers or labels. No methodology is presented. There are no links to the source data. Just a web of pulsing blobs. There’s not even a saucy wench or pirate to break up the monotony.

Neil Johnson tells us what his study shows (and his visualization should have), which is this: misinformation spreads pretty fast on social media, and real information has a hard time keeping up.

Then our ace correspondent explains that Johnson has found the same channels that are spreading misinformation about vaccines are also spreading extremism, hatred, and conspiracy theories like QAnon.

The problem with the QAnon movement, we’re told, is that it’s not limited by languages or borders: its message is that you can’t trust authorities, science, experts, or the media.

Is that a threat to a country’s democracy? asks the intrepid Kretz.

(Remember when “Question Authority” was a liberal bumper sticker?)

Our ace correspondent then spends a few paragraphs explaining how the “attack on Congress” of January 6th was just a taste of how dangerous this stuff can be.

He uses the word attack (or attackers) six times in just a few paragraphs.

He drags in Darrell West from the Brookings Institution, which is a liberal think tank.

Darrell West says social media make a shit-ton of money spreading misinformation because their business model is essentially the gamification of information, and gamification is value-neutral.

(Darrell West doesn’t use the terms “shit-ton” or “gamification” or “value-neutral,” but I believe I’ve conveyed his sentiments accurately.)

Darrell West explains that upcoming Congressional hearings may result in social media companies being held responsible for content they carry, which they currently aren’t.

No, Steffen Kretz wants to go back to the haunting story of the Democrat Lenka Perron, who lives in a city destroyed by Democratic policies, who was angered by Democratic party corruption, and thereby served as the perfect hook for this story about nefarious right-wing conspiracy theories and misinformation.

We learn that she had a hard time leaving the conspiracies behind her because so many of her family members had been sucked down the same rabbit hole.

But leave them she did, with help from social media:

“Maybe it sounds silly,” she says, “But I click on nature videos now. On videos with happy animals. And I only comment on posts from friends who are enjoying themselves with their families. And when I wake up and look at my phone, that’s the kind of stuff my ‘newsfeed’ is full of.”

And now, a thought experiment. Bear with me.

Martha Nice is a well-functioning, well-educated mother of three with a good job. Back in 2016, she was invited to a lot of parties where a lot of friendly people were having fun and drinking a lot of booze. She liked that. It was fun. The season ended, eventually, and she missed all the fun. So she started going out to bars on weekends just to try and catch the vibe again. At those bars, she met a lot of other people who wanted to have fun. It was very merry. Pretty soon she was going to those bars every night, and on the nights when she couldn’t she would knock down a couple of bottles of wine at home, by herself. Next thing you know, she was a raging alcoholic. It was really bad. She’d have one drink and then want another. All day long. And so it went. The whole thing is a blur, looking back. Finally she realized that alcohol wasn’t fun any more: it was a nasty poison that was ruining her life. It was hard to stop going to bars, and to stop ending every night with a bottle or two of chardonnay, especially because most of her friends were the people she’d been drinking with at all those bars. But she made it, thank goodness. Now she only goes to bars to play darts and eat hot wings.

It’s not a perfect analogy, of course. Lenka Perron is not fighting to eliminate social media entirely (nature videos don’t share themselves, yo!), and frankly I’m on her side with respect to their insidiousness they are. It’s why I stopped using Facebook and why I never really got into Twitter, even though I tried using it for a while to promote this blog.

I agree with Lenka Perron that social media are dangeours, and I agree that they should be treated as publishers rather than platforms.

I also believe, however, that we all bear responsibility for ourselves. Stories like these always speak of people falling into rabbit holes, or being sucked into wormholes. It’s always passive. I was just minding my own business when suddenly the conspiracy theories jumped me and dragged me down into this horrible hole!

I think Lenka Perron does a fairly good job of taking ownership for her own fall: she even talks about the shame she felt for having let herself be taken in by something as patently stupid as QAnon.

But ace correspondent Steffen Kretz doesn’t frame it like that. He frames it as a story of victimization. Good hearted, good functioning, goodly educated Lenka Perron, who by the way has three children and a good job, clicked on a few “likes,” and next thing you know QAnon had her by the short and curlies.

There are always conspiracy theories, and they always spread faster than truth. There’s an old line from The Peloponnesian Wars that I used to throw around all the time: “Most people aren’t inclined to find out the truth of a thing, but are content to accept the first thing they hear.” I’m paraphrasing, because I don’t want to bother looking up the exact verbiage, but that’s the gist of it. It was true when Thucydides wrote it back in 1924 and it’s true today.

QAnon is a stupid conspiracy. So was the Russian Collusion hoax that the media shoved down our throats for three years. So is the notion that Donald Trump is a white supremacist. So is the idea that American police are roaming the streets just wasting for a chance to gun down an innocent black person. I could go on.

The problem isn’t the existence of conspiracy theories, from the left or the right, but the terrifyingly rapid way in which they can spread online thanks to social media. Twain famously remarked something to the effect that a lie can get halfway around the world while the truth was still putting on its socks, and he said that before there was even radio. These days a lie can circle the world a thousand times before the truth even knows it’s awake.

But why are social media so awful and dangerous?

Which is kind of weird. How did the wealthiest companies in the history of the world get so rich by giving their product away?

They charge exorbitantly for their product, and that’s how they got so rich.

Their product is you.

And until they change their business model and make you the customer instead of the product, they’re going to continue being awful and dangerous.