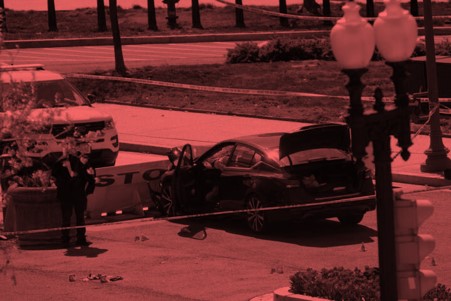 I sincerely hope the story will soon be updated and retitled, but as of 11:00 this morning of Saturday, April 3, DR.dk is running with this:

I normally translate Danish headlines into English directly, but wanted to keep the original here because I imagine (I hope!) it will change eventually, and didn’t want anyone browsing these pages in the future to get the idea that my translation was off.

It literally means: “Officer dead after attack in front of Congress in the U.S.: Suspect shot by police.” (I usually make my translations a little more colloquial for purposes of readability, but I’m leaving this one literal.)

The article is written in a matter-of-fact style that’s suggestive of actual journalism. To the extent the information is available, we are given the relevant information—the who, what, where, when, why, and how—without any editorializing.

In fact, we get almost all of that in the first two paragraphs:

Friday afternoon local time, a person drove a car into two officers and struck a security barrier by the Capitol Building in America’s capital, Washington D.C.

The driver then jumped out of the car with a knife and ignored shouts by the police to stop. He was subsequently shot by Congressional police.

Most of what follows is about the immediate consequences of the action, and various reactions from law enforcement and politicians. It is also delivered in the same terse, matter-of-fact style.

Until the final two paragraphs:

At the moment there are roughly 2300 National Guard soldiers on Capitol Hill as a consequence of the January 6th storming of Congress.

The attack [cost] the life of a Congressional officer.

The last sentence is, to this point at least, a lie.

There is no evidence that the events of January 6th cost the life of that officer, whose name was Brian Sicknick. Even Snopes.com concedes as much:

There isn’t enough information from official sources available at this time to state either way what the cause and manner of Sicknick’s death was, or what mechanisms contributed to it. We will update this story with further information when it becomes available.

The New York Times was forced to retract stories that he’d been bludgeoned to death with a fire extinguisher during the riot.

Snopes is reluctant to let the dangerous neo-Nazi white supremacists of the right off the hook, however, and adds this:

Sicknick’s wasn’t the only law enforcement death. Police were overwhelmed and overrun, and outnumbered officers tried to fend off rioters who were assaulting them from all sides. Roughly 140 police officers were injured, some seriously. Two other Capitol police officers, Howard Liebengood and Jeffrey Smith, took their own lives in the days following the attack.

The headline of the Snopes article is “Did U.S. Capitol Police Officer Brian Sicknick Die After Hit With a Fire Extinguisher?”

Their answer: “No, but two officers killed themselves a few days later.”

The implication of the DR article is clear: the American capital is under military occupation because of the grave threat posed by the insane American right, who already have the death of one Capitol officer on their hands.

And in fact, it looks like this lone wolf insurrectionist was not your run-of-the-mill white supremacist.

American reporting on the story seems to agree on Noah Green as the suspect. Facebook has already deleted the man’s profile, which is certainly interesting.

We don’t know why Green did what he did. We may never know. But here’s one fact worth bearing in mind: he single-handedly killed more Capitol police officers than the entire January 6th “insurrection” did.

At 7:29 this morning, DR had the following item in their “latest news” feed:

It’s still unknown why a 25-year-old man drove a car through the barrier by the Capitol Building in Washington D.C. and into two officers.

This according to DR’s American correspondent Steffen Kretz.

“At the current time it’s come out that there’s talk of a 25-year-old man from the state of Indiana. He’s an Afro-American and is 25 years old. We don’t more about him, because after the incident the authorities removed his profiles from social media, including Facebook,” he says.

The man has no previous arrests and is not otherwise known to police.

The driver of the car was shot during the attack. The one officer later died from his injuries, while the other is injured. Police are not treating the episode as a terror attack.

We also have to keep in mind that the dangerous rhetoric of the left these last few days (that voter integrity laws “are the new Jim Crow”), and over the past year (“all cops are bastards”), may have been responsible for radicalizing Noah Green.

Reports are also emerging that Green may have been mentally ill.

Where will the narrative go from here?

DR has a new story up and it includes information about the perpetrator:

Officer killed at Congress for unknown reasons: “This tears the scab off”, Sean Coogan, DR.dk, April 3

The update is mostly a rehash of earlier reporting with the new information on the identity of the perpetrator. It includes a short video from ace correspondent Steffen Kretz, who spends most of its 105 seconds rehashing the events of January 6th and concluding that it “resembled a coup attempt.”

Only at the very end of his video does he note that Congress was not in session at the time of this attack.

For the record, even most American leftists have stopped calling it an attempted coup. But let’s keep calling it that on taxpayer-funded DR so Danes are even more misinformed about America than they already were.