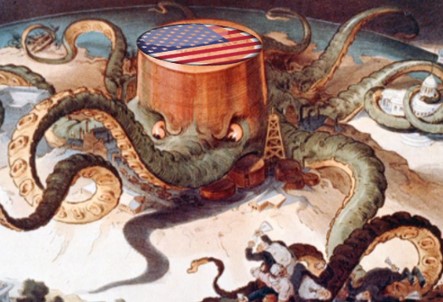 Joe Biden’s so-called “Infrastructure” plan, with a price tag equivalent to about 5% of all the money that exists in the world right now, includes a provision to increase the corporate tax rate up from 21% to 28%.

If math isn’t your strong point, that’s an an increase of 33%.

One of the many problems with a bump of that magnitude is that it encourages American companies to move to countries with less punitive corporate tax rates. Fortunately the American Treasury Secretary, Janet Yellen, has a plan for that.

And no, it’s nothing as obvious as getting her boss to reconsider. Instead, she urged the world on Monday to establish a “minimum corporate tax rate.” Because if every country had a 28% corporate tax, there’d be no advantage in leaving America—problem solved!

America wants to stop the global race to the bottom on corporate taxes, Ritzau, Berlingske.dk, April 5

Subhead: “America’s finance minister suggests an agreement among the biggest economies on a bottom rate, otherwise tax revenues will be hollowed out.”

“Together we can use a global minimum tax to ensure that the global economy thrives based on a more level playing field in relation to taxation of multinational companies,” says Yellen.

She points out that the connected global economy has “led to a 30-year race to the bottom in terms of the level of corporate taxes.”

Another way of phrasing the first bit would be, “if everyone’s equally screwed, then it’s fair!”

And another way of phrasing that last bit would be, “increasing international competition has been lowering consumer prices for thirty years.”

Because that’s who benefits from lower corporate tax rates: consumers.

The “race to the bottom,” as Yellen describes it, is just competition across the global marketplace working its magic for the consumers of the world. The perils of setting American corporate tax rates too high, relative to other large economies, are several. Mainly: it drives domestic prices up and it costs domestic jobs as companies move abroad or raise their prices to protect their bottom line. There’s nothing heinous about it: it’s how the world works.

If your boss asked you to take a big pay cut, and you were offered a similar job at another company that said it would match or exceed your current salary, what would you do?

This shouldn’t be hard to understand, but I’ll walk through it for the kids in the back row.

Let’s say Megacorp makes a product you use. They bring that product to market because doing so is profitable. If they can’t make a profit, they’re not going to make the product, because there are much easier ways not to make money; and yet they can’t charge any old price they want, because if they price the product too high then consumers will turn to alternative producers of the same product, or may do without it completely.)

So a product that costs Megacorp ten bucks to produce may cost you eleven bucks at the store. Increasing their taxes means they’ll have to charge more to make the same amount of profit. So the product that used to cost you a eleven bucks at the store will now cost you more money. That’s less money you’ll have to spend on other stuff, meaning less money for the companies making the other stuff, and so on right down the line.

Alternatively, Megacorp might choose to abandon operations in Industrialville, USA, and relocate to a country with lower corporate taxes—for example, Denmark (current corporate tax rate: 22%). Doing so would allow them to keep their prices low, but it would come at the cost of jobs in America… and instead of getting more money out of Megacorp, the federal government would no longer get any money from Megacorp. Denmark, on the other hand, with its lower corporate tax rate, would be getting new tax revenues from Megacorp and a bunch of new jobs to boot.

Neither option is good for American consumers.

Yellen’s proposal is like an American champion sprinter spraining an ankle and suggesting that all Olympic sprinters go out and sprain their own ankles so he can still win the gold. (“Champion times for the 100-meter dash have been decreasing for years: we need to stop this race to the bottom!”)

It’s a staggeringly stupid suggestion for anyone to make, much less the Treasury Secretary of the world’s largest economy. I realize she’s the first female Treasury Secretary, and hooray for that, but her femininity hardly mitigates the stupidity of her proposal.

It’s so stupid, in fact, that one has to ask: why? The proposal itself is a tacit acknowledgment that the proposed rate increase would be detrimental to America’s interests, so Yellen clearly understands as much. Is she simply hoping to protect America from her boss’s reckless tax hike?

It’s the only explanation I can come up with other than “she’s dumber than rocks” or “she’s an unabashed global communist,” neither of which seem likely for a woman in her position.

If Yellen’s thoroughly brainless or diabolically evil suggestion is embraced by the other big economies of the world (which I certainly hope won’t be the case), and if they go ahead and establish a global minimum corporate tax rate, they will be guilty of collusion. Price-fixing. An anti-competitive practice that would if carried out by people or corporations be a crime.

They would have established the world’s largest cartel.

I understand governments aren’t beholden to the same laws as people or corporations: we need look no further than their monopoly on the use of force to see that. Only the most deranged anarchists would argue that because governments can drop bombs on foreign targets, so should we all be allowed to. But we generally concede these differences because they’re in our interest as citizens. Yellen’s proposal is unique in that it would be governmental collusion against the interests of their own citizens.

If our governments were really looking out for us, maybe they’d work out an agreement on a global maximum income tax?