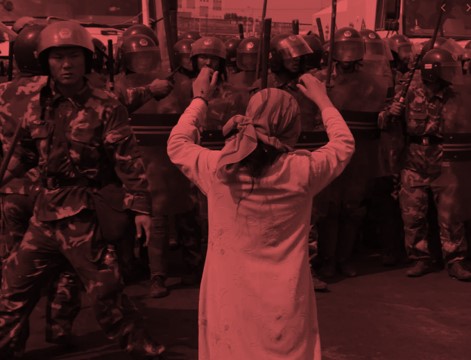 There appears to be unanimity among the western nations that China is doing dastardly things to its Uighur population, even if there’s no agreement at all on how to spell Uighur.

For example, in early March a panel of 50 “experts” (sorry, experts, but you’ve earned those scare quotes) determined that the Chinese government “bears state responsibility for an ongoing genocide against the Uyghur in breach of the (UN) Genocide Convention.”

Their report is well documented and worthy of at least a few moments of your time. It’s sobering.

As President Joe Biden responded when asked about the situation during a CNN “Town Hall” in February:

If you know anything about Chinese history, it has always been the time when China has been victimized by the outer world is when they haven’t been unified at home … to vastly overstate it. The central principle of Xi Jinping is that there must be a united, tightly controlled China. And he uses his rationale for the things he does based on that. I point out to him, no American president can be sustained as a president if he doesn’t reflect the values of the United States. And so the idea I’m not going to speak out against what he’s doing in Hong Kong, what he’s doing with the Uyghurs in western mountains of China, and Taiwan, trying to end the One China policy by making it forceful, I said — by the way, he said he gets it. Culturally, there are different norms that each country and their leaders are expected to follow.

I took that excerpt from Politifact, from an article in which they’re examining whether or not Biden excused genocide as a “cultural difference,” because I don’t want to be accused of putting a spin on the president’s words. So there they are in their full rambling context.

What the president was saying, if I can presume to paraphrase, was “China’s terrible on human rights and they’re committing genocide and all that, sure, man, that’s their bag. But I told Xi, hey, man, that may work for you, but that’s not how we roll, so I’m gonna have to speak out against that kinda stuff. And he was down with that, baby, because he knows we all gotta do our own thang, yo.”

What the president was doing was actually worse than “excusing” genocide: he was equivocating Xi’s “need” to support it to his own “need” to say critical things about it.

He was saying, Of course he has to support genocide, just like I have to oppose it, because that’s just politics.

He’s not saying he has to speak out against genocide because it’s an appalling evil. He’s not saying that Chairman Xi is presiding over an evil empire that’s literally erasing an entire people and culture off the surface of the earth.

He’s saying, I have to criticize him because that’s what the American people expect me to do, and he understands that

There is no morality, no ethics, no philosophy: just the cold political calculation that he has to criticize that genocide stuff or he could lose support from college-educated women in Wisconsin, Michigan, Ohio, and Pennsylvania. Or whoever, wherever.

A real profile in courage.

But all of that is prologue to an article in today’s TV2 News:

The subhead tells the story: “International shoe and clothing manufacturers are now also being punished on television for their criticisms of forced labor by the Uighurs.”

They’ve stopped using cotton harvested in China’s Xinjiang province, where there’s significant evidence that Uighur’s are being forced to do the harvesting.

(Hmm… forced harvesting of cotton… don’t we have a word for that?)

These criticisms angered China, which insists there is no forced labor and anyway there shortly won’t be any such thing as Uighurs.

It angered China so much, in fact, that “Chinese television has now gone so far as to blur the clothing and footwear of all participants if they display logos from any of the critical firms.”

The TV2 article is actually citing a BBC article, which you can read here.

Both articles include screenshots of Chinese reality-tv programs in which the offensive logos have been blurred out.

Both articles point out that a number of Chinese celebrities have severed their ties with western companies in support of Xinjiang cotton.

Both articles also point out that, as the BBC puts it, “Some (western) companies’ online shops are blocked in China and their stores have vanished from some digital maps.”

Nike Inc. is walking a fine line in China — its fastest-growing market — amid a brewing controversy over its business practices there.

The ire stems from this conundrum: Embrace cotton from the contentious Xinjiang region, where there are allegations of forced labor, or reject it and risk a boycott in the world’s second-biggest economy.

The emphasis there was mine, because I want that to sink in: the options are to support slavery or risk a boycott.

That’s a conundrum, according to Bloomberg. Tough call.

With U.S. and European brands in the spotlight, Chinese firms are rallying around Xinjiang, which produces more than 80% of the country’s cotton.

Local companies that said they’ll continue to source the material from the region are being rewarded in the stock market, including Anta Sports Products Ltd., the Chinese sneaker giant that owns the Fila brand. Shares of Beaverton, Oregon-based Nike fell as much as 5.8% in Thursday trading, the most intraday since June. Other companies caught up in the controversy, including Hennes & Mauritz AB and Burberry Group Plc, also fell.

The dilemma shows how navigating the Chinese market is an increasingly thorny (sic) for U.S. and European brands. In 2019, NBA superstar LeBron James, one of Nike’s highest profile paid endorsers, was seen as taking the side of China in its long dispute with Hong Kong over democracy — a stance that riled fans.

A lot of “side taking” by a lot of professional American athletes has “riled” a lot of fans, but let’s set that aside for a moment. Let’s get back to what we’re really talking about when we talk about China.

It’s a totalitarian state with increasingly militaristic ambitions, and is actively perpetrating genocide. And it’s responsible for a pandemic that’s caused millions of death globally and has shut western civilization down for more than a year. It’s crushing democracy in Hong Kong, it’s smothering Taiwan, and has occupied Tibet for so long most people have forgotten that Tibet is even a thing. It’s been engaging in military skirmishes with India.

From item four in the Executive Summary of the report I cited above:

In 2014, China’s Head of State, President Xi Jinping, launched the “People’s War on Terror” in XUAR, making the areas where Uyghurs constitute nearly 90 percent of the population the front line. High-level officials followed up with orders to “round up everyone who should be rounded up,” “wipe them out completely … destroy them root and branch,” and “break their lineage, break their roots, break their connections, and break their origins.” Officials described Uyghurs with dehumanizing terms and repeatedly likened the mass internment of Uyghurs to “eradicating tumors.”

Quite the conundrum, indeed. On the one hand, China is a Very Naughty State. On the other hand, So Much Money!

So what do we do?

Fortunately, our president has an answer, which he laid out on Wednesday:

“It is reassuring to see that for-profit operations and businesses are speaking up about how genocide is just antithetical to who we are,” Biden said.

Yet the president acknowledged that when these companies “in fact move out of China, people who need help the most — people who are working hourly wages — sometimes get hurt the most. I think it’s a very tough decision for a corporation to make or a group to make.”

Then Biden called on China to reject genocide.

“The best way to deal with this is for China to smarten up, stop it,” the president said.

Forceful! But also sympathetic to the economic costs involved with doing the right thing.

Except it’s got nothing to do with China.

In the first paragraph I inserted “genocide is” where it originally said “these new Jim Crow laws are.” In the second-to-last paragraph I added “genocide” where it had previously said “its new law.” Other than that, I just replaced every reference to “Georgia” with “China.”

The president is plainly willing to sacrifice American jobs over domestic politics.

So why won’t he encourage American companies to sacrifice some profits, and shed some jobs, to get the hell out of China if China doesn’t “smarten up” and “stop it?” Is literal genocide not as serious as asking voters for identification, preventing political partisans from attempting to influence voters in line to vote with food and drinks, and allowing eighteen days of voting?

There are different norms that each country and their leaders are expected to follow.