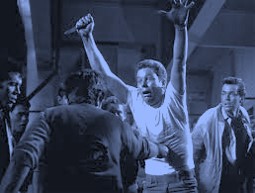 I was a teenager for seven years in the late 1970s and early 1980s. Most of my friends at the time were also teenagers. My experience of teenagers was mostly limited to my peers in our suburban Massachusetts hometown and the surrounding communities. My horizons broadened when I went away to college in Pittsburgh and met teenagers from all over the country.

I now have one teenaged daughter and another who’ll be a teen before year’s end. I’ll concede I don’t know every detail of their private lives, but to the best of my knowledge, neither of them has ever been engaged in or witness to a knife fight. Nor has either of them ever regaled us with any merry tales around the dinner table of friends, or friends of friends, involved in knife fights.

And yet apparently we’ve all been living in a bubble.

“Teenagers have been having fights including fights involving knives for eons,” Bree Newsome tweeted yesterday (with the full authority of a blue checkmark). “We do not need police to address these situations by showing up to the scene & using a weapon against one of the teenagers. Y’all need help. I mean that sincerely.”

Bree Newsome is either very ignorant or very evil, or both.

Technically there are some truths in her statement. Teenagers have indeed been having fights for eons and probably always will. And as long as there have been knives, surely some of those teenagers have fought with knives. Naturally.

But I would like to see some statistical support for the notion that this is now, in America, a widespread phenomenon, because I was not aware that it was and have never seen or read anything to suggest that it was, and anything this wildly counter-intuitive ought to be able to be supported with empirical evidence.

But it can’t be supported with any evidence because it’s a lie. An obvious and stupid and evil lie. What’s more, if knife fights among teenagers were commonplace, or becoming commonplace, then one would expect a responsible adult to have the moral sense to want that trend stopped, not ignored.

I guess it goes like this in Bree Newsome’s world:

“Same old same old. We had a sub in math. Some kid barfed in the cafeteria. Couple of knife fights out in the quad.”

I don’t think that’s a world familiar to one outside of the fevered brain of Bree Newsome.

But why tell such a lie? The idea that there might be a good reason for suggesting that knife fights are just “teens being teens” is simply beyond my capacity for understanding.

But who cares what Bree Newsome thinks, right? She’s just some activist entertainer with half a million followers on that intellectual septic tank called Twitter. No serious person could think like that.

“A black teenage girl named Ma’Khia Bryant was killed,” tweeted Valerie Jarrett, “because a police officer immediately decided to shoot her multiple times in order to break up a knife fight. Demand accountability. Fight for justice.”

One would like to think the closest personal advisor to a former two-term President of the United States would be a somewhat serious person, even if she only has 200,000 followers on Twitter.

The police officer’s decision may have been influenced by the teenaged girl’s upraised, knife-wielding arm preparing to slash down at another black teenaged girl’s head or neck.

Does that other girl’s life matter? Because it would appear the officer was acting on the assumption that it did, and that he was attempting to save it.

Is Valerie Jarrett suggesting it would have been “justice” for the girl being attacked to have taken a knife in the face or throat (or anywhere else) while the officer looked on?

LeBron James took it a step further, tweeting out a photograph of the officer with the text: “YOU’RE NEXT,” accompanied by an hourglass emoji. Backlash was swift enough that he deleted the tweet, only to follow it up with this:

“I’m so damn tired of seeing Black people killed by police,” he tweeted. “I took the tweet down because its being used to create more hate -This isn’t about one officer.  it’s about the entire system and they always use our words to create more racism. I am so desperate for more ACCOUNTABILITY”

His tweet directing hate at a police officer was being used to create more hate, you see, which was unacceptable. His tweet contained just the right amount of hate and he carefully directed it at just the right target. People should have understood that. Why are people such haters and racists? Where is the accountability?

Is there anyone willing to hold Ma’Khia Bryant accountable for her murderous assault? To even acknowledge it had every appearance of being assault with a deadly weapon?

Apparently not: here are a couple of selections from a roundup of celebrities bleating out their own insipid stupidity:

A child engaged in assault with a deadly weapon.

Justin Bieber: The Justice singer shared a photo of a vigil for Bryant on Instagram along with the message, “Seems so unreal but this is the world we are living in. It saddens me that this has become such a normal thing. This is so far from normal and not protocol.”

And how does the White House react?

MS. PSAKI:  Yes.  I should say — yes.  And let me — let me just say, since you gave me the opportunity, the killing of 16-year-old Ma’Khia Bryant by the Columbus Police is tragic.  She was a child.  We’re thinking of her friends and family and the communities that are hurting and grieving her loss.

We know that police violence disproportionately impacts Black and Latino people in communities, and that Black women and girls, like Black men and boys, experience higher rates of police violence.  We also know that there are particular vulnerabilities that children in foster care — care, like Ma’Khia, face.  And her death came, as you noted, just as America was hopeful of a step forward after the traumatic and exhausting trial of Derek Chauvin and the verdict that was reached.

Psaki gets close to the old joke about the definition of chutzpah, that it’s like a child killing his own parents and begging the court for mercy because he’s an orphan.

An orphan in a community!

The vulnerable foster-care child Ma’Khia, the poor sweet innocent thing, just minding her own business when a white cop shows up and kills her because of the color of her skin.

It’s worth remembering that there was nothing about the George Floyd case that had anything to do with race. Zero. It was only the professional race hustlers and their eager minions that turned it into a racial thing. We could have had a “national conversation” about police tactics, about police brutality, about how law enforcement should handle people in the throes of a drug overdose. But that wouldn’t have been good business for the Marxists running BLM. Those Topanga Canyon mortgages don’t pay themselves!

This case is going to be scrutinized thoroughly. We may yet learn that the intended victim of the vulnerable child Ma’Khia was wielding a weapon that can’t be seen in the video. It may be that the vulnerable child Ma’Khia was well-known for raising knives as a very personal form of greeting. Who knows what we may learn as the case is investigated.

But there’s an interesting dichotomy at play here.

With George Floyd: we all saw it with our own eyes!

With Ma’Khia Bryant: never mind what you saw!

With George Floyd: the neck restraint may be standard practice, but it must be outlawed!

With Ma’Khia Bryant: the use of knives may be dangerous, but it’s completely normal and always has been!

Teenagers fighting with knives is not normal, and to the extent it’s being normalized anywhere, we need to start denormalizing it.

And for what it’s worth, how can anyone who believes any lives matter actually suggest that knife fights among teens ought not to be interrupted?

Consider: to try and score political points and stoke racial hatred, people are willing to pretend that knife fights are normal. Which is in fact a step toward normalizing them. They’re literally normalizing knife fights among teenagers to make the story of a white cop trying to save a black girl from being murdered into the story of a white racist gunning down an innocent black girl. That’s how badly they need the racism: they’ll invent it where it doesn’t exist and justify something as awful as teen stabbings to make their story hold.

“Help! I’m at the corner of 10th and Oak, there’s some kind of knife fight, someone’s going to get killed!”

“I’m sorry, ma’am, this line is reserved for emergencies.”

Who wants to live in that world?

That some people are so blasé about attacks with knives (technically a knife fight usually requires both parties to be armed with a knife – in this case, that does not seem to be the case at all, so this was assault with a deadly weapon) also speaks to the real world rarity of knife fights.
If these people had any actual experience with knife wounds they would realize that IRL is not like Hollywood movies where knife wounds are superficial, easily and quickly healed, and of no long term consequences. But it seems clear their only frame of reference is probably action movies. Cuts, even those that are not life threatening, often result in lifelong after-effects. It is not easy to kill someone quickly with a knife, but quite easy to give them permanent injuries.
It is truly the Age of Stupid