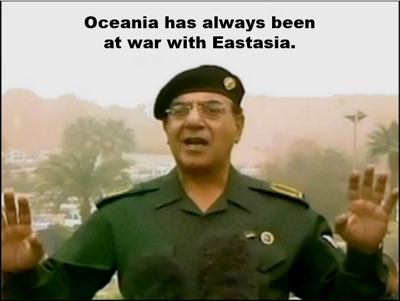 Conventional wisdom tells us that control of “the narrative” is everything these days. And I mean everything. To control the narrative, we’re told, is to control the direction of our culture. Here in Denmark, there in America, and everywhere else besides: to frame the terms of debate is to win. Perception is reality.

There’s plenty of evidence to suggest that “the narrative” isn’t as all-powerful as its most devoted worshippers seem to believe.

Whenever the loyalist media are compelled by events to acknowledge a reversal to their narrative, for example, the shock and horror they express give the game away: they’re not surprised by an unanticipated development, they’re angered by the rejection of their narrative. That’s what happened with Trump in 2016, and with Brexit. It’s why they couldn’t let go of the idea that “that Covington kid” was a racist provocateur, and why the absurd phrase “fiery but peaceful” had to be invented as a patch on the narrative of “peaceful demonstrations” when the persistent arson, vandalism, and worse could no longer be denied.

The American left is obsessed with the narrative. As soon as something pops up and catches Americans’ attention, the American left gets right to work making sure that it’s understood the way they want it understood. The media—the propagandists peddling opinion camouflaged as fact—play right along.

One of the many, many ways in which the Danish media betray our trust is in the way they source their American news. By relying on sources like the Times, the Post, CNN, MSNBC, NPR, and other objectively leftist news outlets, and almost completely ignoring objectively neutral or rightist news outlets, the Danish media aren’t much more than amplifiers for the “narrative” of the American left.

With all that in mind, here’s an interesting case study:

Here’s why a secret intelligence report gives a new impetus to the Chinese lab theory of virus release, Michael Bjerre, Berlingske.dk, May 26

It’s Michael Bjerre reporting on America for Berlingske, so you know you’re not going to get the short answer. It might reflect badly on Democrats. So Danish readers get the long answer instead.

Bjerre does deserve some credit, however, for sourcing much of his article from the Wall Street Journal: it’s no longer the conservative organ it once was, but neither is it totally in the tank for the left. It’s certainly a step up from the Times, Post, CNN, MSNBC, and NPR.

It’s been discussed time and time again—and routinely squashed as a a convenient political conspiracy for Donald Trump—but the theory will not die: that the coronavirus that has plagued the world for well over a year actually escaped from a laboratory in China.

Bjerre’s not being entirely accurate: the theory wasn’t squashed routinely because it was a political conspiracy, but because it was feared it would redound to Trump’s benefit.

The videos of Nancy Pelosi and other leading democratic figures urging Americans to celebrate the Chinese New Year in America’s crowded Chinatowns in late January 2020 were predicated on the narrative that Trump was a racist monster for suggesting that the virus had anything to do with China, or was even anything to worry about (New York’s Mayor de Blasio was even recommending movies New Yorkers should go see). Democrats were gloriously anti-racist and would staunchly resist the president’s attempts to whip up fear and resentment.

The narrative eventually went so far as to claim that even referring to the virus geographically, as we have always done, was itself an act of racism. (The narrative continues to insist that it’s racist to call it the Wuhan virus or the China virus, but remains strangely silent on the British, Brazilian, Indian, and South African variants.)

And now new information from a secret US intelligence report will no doubt once again push for demands for an in-depth and exhaustive investigation of where the virus actually originated.

Well, sure: as Bjerre notes in the very next paragraph, that report apparently indicates that “three researchers from China’s Wuhan Institute of Virology became so ill in November 2019 that they sought treatment at a hospital.”

Three researchers from the same lab getting sick enough to require hospitalization certainly might raise a few eyebrows. How many employees are at that lab? Did these three work in the same department? Which? If this was just a seasonal illness making the rounds, but was serious enough to hospitalize three employees at the same lab, should there not have been more hospitalizations from the same seasonal illness among the general population? Were there? Do Wuhan hospitals not keep records?

In fact, a lot of things about the origins of the virus, and China’s reactions, ought to have—and did—raise quite a few eyebrows.

But the narrative had already been set in stone: there was no way in hell the virus could have emerged from a lab. Anyone who said otherwise was at best misguided, at worst some kind of racist troll.

(Why the left insisted on this narrative is an intriguing question: out of reflexive opposition to Trump, or reflexive defense of their friends—and in some cases their paymasters—in the Chinese Communist Party?)

Bjerre says there are two reasons why this new information has aroused interest. First, because of the timing: November of 2019 is when epidemiologists and virologists believe the virus first began circulating in Wuhan, despite the CCP’s insistence that the earliest recorded case was on December 8. Secondly, because “in China, one does not seek treatment in a hospital—as three of the scientists allegedly did—unless one is very sick.”

Bjerre notes that China continues to insist the virus did not leak out of a lab.

“The United States continues to ‘hype’ the theory of a leak,” says a response from the Chinese Foreign Ministry to The Wall Street Journal, asking rhetorically whether the United States really “cares about finding the source, or whether it is an attempt at to divert attention?”

As president, Donald Trump also repeatedly put forward the theory of a laboratory release and quite consistently called the coronavirus “the Chinese virus.”

According to critics, however, that was primarily an attempt to divert attention from his own incompetence in leading the corona crisis (response) and the battle against the pandemic.

But now the theory of a laboratory discharge is back in the spotlight.

(For the record: “according to critics” is a phrase one rarely encounters in Danish articles about Democratic politicians.)

Bjerre points out that the EU and the Biden administration are now saying that “all technically credible theories about the origin of the pandemic should be investigated by WHO and international experts.”

That’s called kicking the can down the road: it’s an acknowledgment that although Biden and company can no longer wave off curiosity about the Wuhan lab, they’re still not prepared to indulge it: the WHO is under China’s thumb, and unnamed “international experts” are as legitimate a scientific body as the “top people” from the ending of Raiders of the Lost Ark.

“We continue to have serious questions about the first days of the covid-19 epidemic, including its origin within the People’s Republic of China,” said a spokesman for Joe Biden’s National Security Council on Sunday to the Wall Street Journal.

We’ve all had serious questions, going back to the first months of 2020. There was simply one that we weren’t allowed to ask.

Bjerre then cites Jen Psaki’s slippery and non-commital reactions to questions tossed at her recently about this new report and its possible significance, and her assertions that she couldn’t confirm or deny any information from the intelligence report.

Then Bjerre wraps it all up:

Shi Zhengli, the leading coronavirus expert at Wuhan Laboratory, has denied a leak from her lab and has told the WHO that all her staff have been tested negative for covid-19 antibodies.

Marion Koopmans, a Dutch virologist from the WHO team who visited the Wuhan lab in March, told NBC News that some of the staff at the laboratory were ill in the autumn of 2019. But she saw it as a typical seasonal illness.

“It was nothing spectacular,” she said.

“Maybe there were one or two sick. It was certainly not a big, big thing.”

We can safely ignore Shi Zhengli, who is entirely under the thumb of the CCP, but what about Koopmans? Is she correct, and is the intelligence report wrong? If she’s wrong, is she lying or just misinformed?

Questions abound, as they always have.

For the record, no one is saying that the virus definitely came from the lab. What people are saying, and have been saying for about fifteen months, is that it’s certainly a possibility that should be—and has not been—examined exhaustively.

And for most of those fifteen months, the people who’ve been saying that have been dismissed as cranks, or loons, or racists.

Because that’s been the narrative.

So when a stalwart defender of the narrative like the Washington Post’s resident narrative enforcer—sorry, fact checker—Glenn Kessler coughs up a headline like “Fact check: How the Wuhan lab-leak theory for pandemic origin suddenly became credible“, you can almost hear the narrative shedding its skin.

It didn’t “suddenly” become credible: it’s been credible all along.

What Kessler means, but doesn’t dare say out loud, is that you’re now allowed to find it credible.

And soon enough, you’ll be allowed to believe that you’ve always been allowed to find it credible.

And then you’ll be required to.

Because the lab-leak theory has always been credible in Oceania!