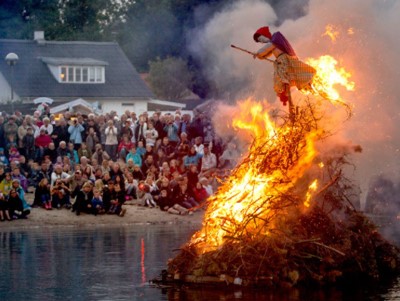 The holiday is a celebration of John the Baptist’s birth, which the Gospel dates six months prior to Jesus’s: thus St. John’s Day is six months before Christmas. (More or less: changing calendars over the years have resulted in the slight offset.)

Skt. Hans Aften falls two days after the summer solstice, and is therefore one of the longest nights of the year. Danish celebration traditionally involves getting together with friends and family for dinner, then attending a local bonfire. The bonfires are typically lit around sunset (about 22:00 in greater Copenhagen). As they are lit, Midsommervisen (Vi elsker vort land) is sung:

Here’s a picture from the first Skt. Hans Aften celebration I attended as a father (and only my second ever). It’s from Frederiksberg Garden back in 2005.

That was Eldest’s first Skt. Hans, and she’s now studying for her driver’s license. So I guess it was a while ago.

One element of the traditional bonfire I haven’t mentioned yet, and that isn’t visible in that photograph, is since the early 20th century it’s been traditional to set a witch on top of the bonfire. Not a real witch—those are hard to come by—but a kind of scarecrow witch, usually just a bunch of straw crammed into a little witchy outfit. You can read a brief history of the tradition on this page from the National Museum, or you can just take my word for it that, like most traditions, it’s evolved from a blend of sources that get increasingly uncertain the further you go back in time.

One can’t always make it to a public bonfire: sometimes personal circumstances require celebrations at home, or at smaller backyard gatherings with neighbors. We’ve had to fall back on both options at various points over the years.

Back in 2015, for example, we were in the middle of a rough stretch of road and very nearly canceled, but Youngest, who was 6½ years old, insisted that we at least burn a witch of our own in our outdoor fireplace:

The witch was entirely her own design. The only thing she got help with was cutting some of the rougher angles of the cardboard.  The Danish text says: “Witch.  I am not one.”  Ceci n’est pas un pipe indeed!  (I actually told her we shouldn’t burn her if she wasn’t a witch, and she said, “Of course she’s a witch.  Witches lie!”)

I posted that photo on Facebook, where it fell right into the slipstream of bonfire photographs being posted from across the nation. They were “trending,” as they do each year on this evening.

So I was surprised to very quickly get a comment from an old American friend of mine. I’d known her more than 30 years at that point. We’d met at college in Pittsburgh way back in the before-times, had been close friends for a few years while we were both living in northeastern Massachusetts in our early post-college years (she set me up with a girl I dated for nearly two years; I set her up with a guy she dated for a couple of weeks). We lost touch when I moved to the west coast, but renewed our friendship many years later when Herself and I were in New York and she was living upstate with her husband and child.

In her comment she informed me that Skt. Hans Aften was “not an amusing tradition” because her husband’s “seventh great aunt” was burned at the stake back in the seventeenth century.

I replied by extending my condolences to her family on the loss of a loved one under such tragic circumstances, but also reminded her that this was a Danish tradition that had very little to do with what went on Salem, Massachusetts, back in the 1600s. I said it was all part of a harmless and beloved tradition.

She replied that there was nothing cozy or charming about a tradition that depicts the burning of women to death.

I noted that these bonfires did not represent women being burned, but witches.

Herself chimed in at this point, reminding our mutual friend (they had bonded in New York) that this was a Danish tradition she knew nothing about, so perhaps she should withhold comment for want of more context.

Our mutual friend felt no need for additional context. She doubled down angrily. Furiously. She even accused me of bullying her.

At that point a family member of mine jumped into the thread to express sadness or anger that I should have posted such pictures—the one you see above along with a couple of when the flames were a little further along—on the very day that a child in her little suburb had been burned to death in a tragic accident.

I expressed my sorrow and horror at that news, along with a gentle reminder that news of that family member’s little town doesn’t get much coverage in Denmark, and I hadn’t been aware of it.

This was considered unsympathetic and insensitive of me. The family quarrel broadened a little, but, being a family quarrel, was eventually smoothed over.

My old college friend, on the other hand, unfriended me. I have neither spoken to nor heard from her since. Thirty years of friendship down the drain because a Danish national tradition offended her, ostensibly on behalf of her husband’s “seventh great aunt” having been murdered by a British colonial mob during a period of mass insanity.

If she was willing to forsake our long friendship over that then I suppose I’m better off without her, but I still sometimes wonder at the magnitude of her reaction.

The issue does open the door to some interesting philosophical reflection, however.

No one in Denmark is advocating that we convert Skt. Hans Aften into a celebration of human sacrifice. No one ever has. The very idea that anyone would is idiotic.

Secondly, those effigies are models not of women, but of witches. Evil spirits. Not innocent maidens. Not beloved mothers, wives, or daughters. Horrible practitioners of the dark arts who might turn you into a frog or stuff your children into an oven, who might curse you or the people you love in any number of terrible ways; they are monsters, every bit as terrible and fearsome as wolfmen, vampires, demons, and telemarketers.

And yet there remain sincere and well-meaning people, like this parish priest, who believe we should stop:

Should we not revive the flame of joy? Gather around the happiness, the positive, and thereby keep the negative away, instead of always looking for a scapegoat that we can pile all the evil on and then burn away. The truth is that evil is not only in others. Evil is in all of us, and if we don’t realize our own sinfulness, we’re leading ourselves astray. The beam in our own eye we do not see, but the splinter in our fellow man’s eye we see.

The flame of joy. That’s what it takes to rebuild the community and strengthen the unity of our country. For we want peace in this country. Not burning women. Or anyone else.

So get rid of the witch at this year’s Saint Hans bonfire. Let’s pay homage to the women and not burn them off.

That’s also philosophical, and obviously a little theological, but it’s a little saccharine for my taste and takes things a bit too far. It’s like arguing for an end to piñatas because they encourage children to beat burros.

Where is the evidence that burning these imaginary monsters is programming the children of Denmark to despise or disrespect living, breathing women? Consider: according to Statista, among all the countries of the world Denmark is second only to Switzerland in terms of gender equality. We’ve been burning “witches” on our Skt. Hans bonfires since 1900.

Since it’s apparently okay to argue without evidence that this tradition is harmful to the status of women in Denmark, I’ll go ahead and argue, based on those two data points, that this tradition has given us some of the strongest women in the world and should therefore be maintained.

You can accuse me of any logical fallacy you like with respect to my use of that evidence. I acknowledge it’s a pretty weak case. But although it may not actually support my contention, it blows a pretty substantial hole in the parish priest’s.

And that’s it for today: I need to shut down the computer and get to work helping Youngest make this year’s cardboard witch—who will, the family has long ago agreed, be wearing a facemask on the pyre.

(Featured image: screen grab from “VisitOdsherred.dk” website, of a picture from Skt. Hans 2020.)