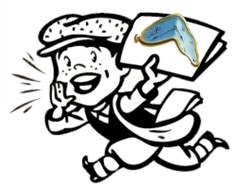 While down in the the west (see yesterday’s post) I bundled up a whole bunch of stuff I wanted to deal with on this blog.

Maybe I’ll get to some of it and maybe I won’t in the days ahead, but it won’t be today.

Because an article published on Berlingske yesterday demands my attention today:

Trump himself called it “the Chinese virus,” but he now accuses Biden of being the cause of the rising vaccine skepticism in the US
Kalinka Aaman Agger, Berlingske.dk, 26 July

That headline didn’t just capture my attention: it tortured it.

Consider its two clauses: elements: Trump called covid-19 the Chinese virus and Trump blames Biden for rising vaccine skepticism in the US.

Can anyone connect those dots in such a way that the “but” of the headline makes sense?

I often disagree with the logic of Berlingske’s American coverage. I’m often irritated by its slant or spin. I often take exception to obvious and deliberate omissions in its articles. This goes beyond all that. It isn’t that I disagree with the premise of their headline: I don’t understand it.

That seems to be the gist of the headline’s first clause. It’s a simple statement of fact.

See for yourself if you haven’t already:

The video was put out by the GOP and has (therefore?) been flagged as false by Politifact, ostensibly because it leaves out the important context that Biden and Harris weren’t skeptical about the vaccine because of any anti-vax sentiments per se, but because they mistrusted everything the Dread Tyrant Trump said and did. The nature of their skepticism is, however, irrelevant: it’s the mere fact of its expression that matters. Did they express skepticism? Yes.

Even with all this added context, however, what has Trump’s characterization of the virus got to do with his blaming Biden for skepticism about the virus?

The use of “but” suggests that there’s something incongruous or inconsistent about these two observations: that it’s somehow wrong or unfair or stupid to call covid “the China virus” and then turn around and blame Joe Biden for the public’s skepticism with respect to the vaccine.

There’s no conjunction in the English language that can be sensibly deployed to join those two clauses into anything resembling coherence.

The bunny was blue but I was late for the bus. The toast was burnt and the prime minister had a mustache. She was a hypochondriac or the flowers were blue. Jones was ugly, so the cathedral was made of stone. You see? You can’t just go around jamming independent clauses together with any conjunction lying around: you’ve got to make some sense.

So let’s move on to the relevant passage of the article itself to see if it can help us:

As president, Trump himself was heavily criticized for not taking the pandemic seriously and for not doing enough to stem the virus. He has repeatedly called the coronavirus “the Chinese virus”.

This would appear to be the passage the editor took to heart in crafting the headline. Possibly Agger’s point, or the point the headline writer interpreted from the text, is that Trump’s belief that the Biden administration has engendered skepticism about the vaccine is a little hypocritical given that Trump himself was dismissive of the virus once upon a time. That premise only works if we’re willing to assume that downplaying the significance of a virus could encourage skepticism about an eventual vaccine against it. It’s a bit of a stretch, but at least there’s a glimmer of a hint of a connection.

Even so, it’s a stupid premise—everyone was dismissive of the virus at one point or other, and the entire establishment was skeptical about the feasibility of a virus being developed as swiftly as Trump was assuring the world it would be (and ultimately was), and everyone was calling it the Chinese (or Wuhan) virus at some point—but Berlingske’s never been afraid to run with a stupid premise as far as the Dread Tyrant Trump is concerned.

Given this dog’s breakfast of a headline, though, what’s the article actually about?

You can read it yourself at the link, but let me just walk through the structure.

First, the opening line—what we were taught in primary school was our “topic sentence”—states that there’s growing resistance among various groups in America. The object of that resistance isn’t specified. The sentence contains a link to an article in the Washington Post (“CDC warns this is ‘pivotal moment’ in fight against delta variant”) that, weirdly enough given the context, has very little to do with resistance to anything.

The next sentence says that this resistance is making it hard to persuade unvaccinated Americans to get their shots.

We’re then told that Donald Trump hasn’t wasted any time in suggesting a possible explanation for all that resistance: they cite an article in Newsweek in which Trump blames it on their lack of trust in President Biden.

(There’s no data to back up Trump’s claim: a WebMD study from April 29 found that “reluctance is mainly driven by concerns about safety, side effects and distrust in government.”)

The article dwells on Newsweek’s reporting on Trump’s remarks at an Arizona rally over the weekend for a few paragraphs: Trump boasts about how quickly and against what odds (and what skepticism) the vaccines were developed and criticizes the Biden administration for halting the Johnson & Johnson vaccine in April.

Then we get the two paragraphs already cited and move into a new section: “Growing Worry.”

This section begins by citing Trump urging his supporters at the rally to get vaccinated while also saying he supports their right to choose.

Then we’re informed that Biden is urging all Americans to get vaccinated as soon as possible.

Next we get some stats: we’re told 49 percent of Americans are now fully vaxxed, and that for Americans over the age of 12 that figure is actually 57%.

(We’re not told that in Denmark, the percentage of the population that’s been fully vaccinated is 57.7%. Presumably we’re not given that benchmark because it might suggest that the level of “resistance” in Denmark is about the same as it is in the states.)

We’re told that the CDC is urging Americans to get vaccinated because we’re at an important turning point, in which many hospitals are nearing full capacity.

Finally, in the last paragraph, we’re told that vaccination rates are lowest in the southern states and that (unsurprisingly) this is also where infections are spreading the most. The article concludes: “The three Republican states Florida, Texas, and Missouri account for 40% of all new infections in the US.”

Curious that Agger would throw that in.

Why do you suppose she did that?

According to Statista, the four states with the highest covid death rates per 100,000 residents as of right now are Democratic states: New Jersey (299), New York (276), Massachusetts (262), and Rhode Island (259). The Republican states she’s throwing shade at—Florida (180), Texas (183), and Missouri (163)—don’t even crack the top 20. But she obviously couldn’t let an entire article go to press without at least one dig at Republicans: after all, she’s writing for the “borgerlig” Berlingske Tidende!

But never mind all that.

The real question is: what’s this article actually about?

When you look at it that way, the Dadaist headline makes perfect sense.