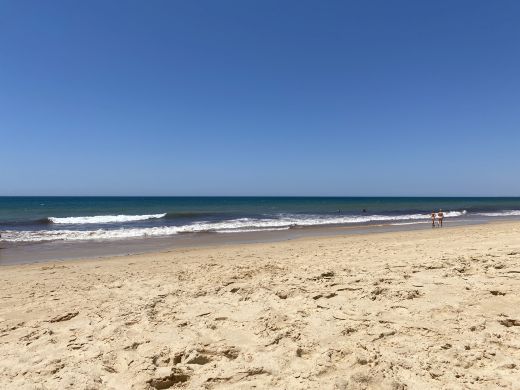 It was a refreshing three weeks of vacation. I’m tanned, rested, and ready for whatever the rest of this year wants to throw at us.

(If the rest of the year is listening, that was not intended as a challenge.)

We spent two weeks down in the Algarve, sunning ourselves in the Portuguese sun and splashing ourselves in the Portuguese waters. (We hold no grudge against the Danish sun and waters, but they’re hard to get a hold of down there.) Slow and easy. No muss, no fuss. Three squares a day, plenty of sleep, no wake-up calls. Moonlit skinny dips and lazy afternoons reading by the pool.

Before I get into the meat of this post, I’d like to touch on a problem with the name “the Algarve.” According to Britannica, “Algarve” is derived from the Arabic “Al-Gharb,” meaning “the west.” That makes sense: southern Portugal lies directly to the west of Andalusia, which was under Arab control for about seven centuries. Unfortunately, it also means that calling the area “the Algarve” doesn’t make sense, because in doing so one is actually saying “the the west.” Once you know that, you can’t help wincing a little inwardly with every usage of the phrase. Even your own.

I just wanted to get that out of the way to pre-empt anyone from coming at me in the comments for calling it the Algarve instead of just Algarve. The comments on this blog are hellacious enough as it is.

To resume: we enjoyed our time in the Algarve.

It wasn’t our first time: we have a family connection down there and have been visiting regularly for about ten years. This was, I think, our sixth visit.

Despite our familiarity with the area, Herself did a lot of research before our trip to make sure we’d actually be allowed to board our flight and to enter Portugal when we got there, and to find out what kind of restrictions we could anticipate with respect to the pandemic. And a damn good thing she did: it turned out that although Denmark considered me fully vaccinated because I’d had my second jab of Pfizer juice, Portugal wouldn’t consider me fully vaxxed until 14 days after that second shot. Naturally, I’d received it 13 days prior to our departure: I therefore needed to get a test within 48 hours of our flight to prove I was negative. Good thing we checked! Eldest wouldn’t be a problem because she was immune by virtue of having already had covid, and Herself had been fully vaxxed ages ago, so I dragged Youngest to the local testing center the Monday before our Wednesday flight and we got our damn tests.

Herself had learned that masks would have to be worn at all times in the airport and on our flight. That was annoying. She also learned that in Portugal, masks were required to be worn at all times in all public places, indoor and outdoor.  Even beaches. You have to wear your mask out onto the beach to wherever you choose to settle down, we learned, but you’re free to go from your towel to the water and back without a mask.

Consider the wonderful science of that. Imagine a beach that’s 100 meters of sand from the parking lot to the water’s edge. You get out of your car, mask up, and lug your stuff 80 yards toward the water. You then plunk everything down, remove your mask, and may now scamper maskless across the scalding sand the remaining 20 meters to the water.

(Yes, I’ve mixed up meters and yards. No edits, no apologies. Take it up in the comments, you nattering nabobs of nitpickery.)

The smart play would therefore be to plunk yourself down right next to the parking lot, wouldn’t it? Step onto the sand, lay down your towel, and hey presto!—the beach is yours to roam at will without a mask.

It’s a wonderful science, very much like the wondrous science that tells us that we face no infection or transmission risk when sitting at a restaurant table, but are ticking time bombs the moment we stand up; or that we must be masked boarding a bus or a train, but may breathe freely the moment we sit down next to the sweaty, shivering stranger with the bloodshot eyes. And don’t worry about that guy across the aisle from you hacking up a lung: he’s seated. You’re safe. Everybody’s safe. It’s a beautiful world!

In any case, these draconian measures might ordinarily have persuaded us against making the trip, but since we’d be staying at a private residence and spending most of our time there, we decided it wouldn’t be as big a hassle as it would have been if we’d been staying at a hotel or resort. There would be no masks at or around the house, and we’ve been down to “the the west” often enough that our sight-seeing needs were minimal. That is, as Mehitabel the cat would say, “wotthehell, wotthehell.”

(I should point out to non-Danish readers that Denmark has never required her citizens to wear masks outdoors.  On the contrary, the authorities were throughout every phase of lockdown actually recommending outdoor activities—motion!—with appropriate social distancing.  By the time we left Copenhagen, in fact, the only place in Denmark where one was still required to wear a mask was on public transportation, and even then it was only while moving about on the trains and buses: once seated, breathing was lawful.)

When we checked in at Copenhagen airport, the line was moving slowly. We figured it was taking extra time to process people because besides national passports, covid passports were also being checked.

But no: it was just a slow line.

“They’ll probably check at the gate,” we figured.

As we made our way down the gangway to the plane, we wondered aloud why no one had checked our covid status. In the days leading up to the trip, after all, the airline had been spamming us with emails and text messages insisting that, by god, we had better be damn sure our covid papers were in order.

I said: “Probably it’s not the country you’re leaving that gives a damn: after all, you’re leaving. It’s the receiving country that cares.”

A guy ahead of us was apparently listening in: he laughed and told us that was his thinking, too, because surely someone, somewhere, would be checking the EU Covid Passports we had all dutifully installed on our smart phones. (Or the printout of Youngest’s test results.) Right? Other passengers were nodding.

The flight crew sure didn’t care.

Nor did anyone down at Faro airport gave a flying fig about our covid status. There were signs everywhere telling us all the things to do to avoid giving or getting the virus, some of them reminding us of the fines to which evil-doers would be subjected, but not a soul asked to see our papers.

Because although you can’t trust people to make their own risk assessment decisions, you can easily trust them to obey whatever Byzantine rules you’ve just passed by executive fiat.

I’d like to think that because all the data is out there, and because all the governments are sharing it, the airline had (behind the scenes) simply checked the status of every passenger prior to boarding and confirmed that we were in fact all up snuff with respect to vaccinations, immunity, and tests. I’d like to think, for example, that the empty row in front of us on the plane represented three passengers who had failed to document their covid status and had therefore been prevented from boarding. I’d like to but I can’t, because doing so would assume a level of competence and efficiency that are not in evidence.

I have to give the Portuguese credit for obedience, however: their government was telling them to wear masks at all times in all public places, and that’s what they did. On the sidewalks, on the waterfronts, in the parking lots. On miniature golf courses. Jogging down country lanes. Golfing. We even saw people wearing masks while driving alone in their cars.

We were driving on one of the toll roads at one point and I was sort of in my own head, when I suddenly realized something I’d seen didn’t compute. There’d been an electronic highway sign, the kind that can be programmed to display any message, and it seemed to me it had said something about mascara.

“Did that sign say something about mascara?” I asked.

“It said to use mascara,” Youngest piped up from the back seat.

“It said use mascara,” Herself confirmed.

I thought they were messing with me, but a few miles later there was another electronic sign with the same message:

It was a wonderment.

As someone who lives with one adult and two teenaged females, and has in fact lived with women for all but a year or two of my life, I freely acknowledge the importance of makeup even if I don’t often use it myself.

Even so, Portugal’s insistence on mascara was puzzling.  What had their science unconvered that Danish science hadn’t? Had the WHO been informed? The CDC?

Once my eyes were open to this strange imperative, I began seeing it everywhere, on billboards and posters in every town and village and plastered to every government building.

Here’s a photo I snapped of one:

As Youngest observed: “You can’t even tell whether she’s wearing mascara.”

That’s bad design, I explained, but it doesn’t detract from the urgency of the message. Not from anyone who can read, anyway.

Despite these ubiquitous public service announcements, and the urgency they suggested, and the otherwise compliant obedience of the local population, I didn’t notice the women of Portugal wearing any more or less mascara than the women of Denmark.  Nor did I see a single man or child in mascara on the entire trip.

Which is, I suppose, why the government was pushing so hard.