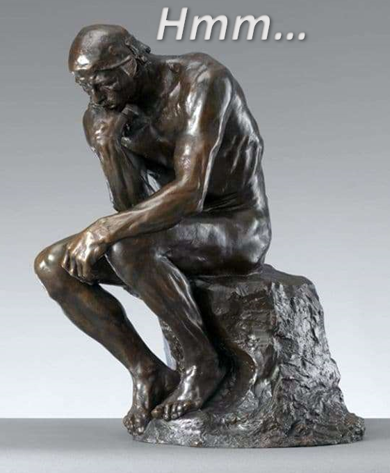 I said there was some stuff I’d been thinking about while on vacation that I wanted to share.

So here we go.

Our sixth grade social studies teacher was a kind and portly old woman whose dentures often fell out when she got excited.

She got excited a lot, poor thing.

That’s what made her a good teacher: she was genuinely excited about history, which wasn’t something I’d encountered before. She brought it alive by turning all those names and dates and places into stories: exciting stories that got us all sitting on the edge of our seats. You could smell the horses when she was describing a medieval battle; you could hear the clang of swords and the swoosh of arrows as they darkened the sky. At least until her dentures fell out.

Social studies was not, alas, just history. It also included current events. It just so happened that there was a presidential election that year (one of the candidates was a peanut farmer from Georgia), and she used it to introduce us to American politics.

We were 11 and 12 years old, all of us, and knew very little of politics, even though the behavior of most politicians was right at our level: a day on any sixth grade playground is a crash course in Machiavelli.

I was eleven years old. Of course I decided I was a Democrat. And I remained one for another dozen years.

I don’t want to be too hard on Mrs W. She was kind and she genuinely got me interested in history (an interest I would subsequently lose for a want of more teachers like her). Her absurdly simplified political spectrum wasn’t so much wrong as it was incomplete.

The left is indeed generally inclined to social experimentation in the name of progress, and the right does in fact frequently act as a mere brake on such experiments. There’s a useful symbiosis between them. But there’s more to it than that.

While on vacation down in the the west, I stumbled over a video of someone (I think it was Alfonzo Rachel on Bill Whittle’s The Virtue Signal) saying something like “People call me conservative, but I don’t know what they mean. What would I be trying to conserve? I might have been conservative at some point, but I actually think of myself as a radical.”

It was a good point and it stuck with me. Then I heard a similar sentiment expressed by another ostensibly conservative commentator.

I often describe myself as a conservative; I’ve praised the virtues of conservatism on these electric pages many times in the past, most explicitly in a post called (surprisingly enough) The Joy of Conservatism.

How have we on the right, we conservatives and libertarians, allowed our simple, positive, buoyant message to be so badly bungled over the years?

Ours is, after all, the political philosophy that doesn’t want to put you in a box (and keep you there). We’re the ones that don’t care what color you are, what god you worship, or whom you sleep with. We’re the ones that believe the government in answerable to you, and not vice-versa. We believe in the sovereign and inalienable liberty of the individual, and we’re committed to defending that liberty and individuality because we know from history that there is no more powerful engine for progress and prosperity than free people working toward their own individual dreams: there is not one historical example, from any culture or era, of a society whose progress came from any other source.

How is that not a more uplifting message than the grievance studies, condescension, and nannying of the left?

Modern American liberalism’s message, on the other hand, is something like, “You can’t handle the freedom!”

I wrote that eight months ago, and although I still stand by the sentiments I’ve begun to reconsider some of the wording. What we call contemporary American conservatism isn’t really conservative any more: it’s become radical. By the same token, what we call American liberalism is now a hot mess of authoritarian tactics being used to jam regressive ideas down our throats.

The left has become the establishment: humorless, grim, and self-righteous (but just as incompetent and ideologically blinkered as ever). The right is now the counterculture.

“Liberalism” and “Conservatism” don’t make much sense as labels. They haven’t for years.

There is a certain reverence for tradition on the right that might be called conservatism, but only superficially. The right tends to give tradition more weight that the left does because the right generally believes that things that ain’t broke don’t need fixing—that human arrangements that have been a constant through human history have probably been so for a reason and that if we’re going to tinker with such arrangements, we ought to be very careful. “Chesterton’s fence” is a good example: before we tear something down, we ought to be sure we understand its purpose. We’re willing to throw out the bathwater, but we’re damn sure holding on to the baby.

What most American “conservatives” (including yours truly) want right now, however, is actually a radical departure from the status quo: smaller and much more localized (and much less intrusive) government; more individual liberty; a tearing down of the absurd restraints that are being imposed on speech, assembly, and religion; free competition in free markets; I could go on.

It isn’t that “conservatives” like me don’t want a better, brighter, happier, healthier, and more prosperous tomorrow for everyone (which is the standard “liberal” line against the right): it’s that we do, we want it desperately, and we can see left liberalism (progressivism, socialism, Marxism) isn’t going to take us there.

It may not seem important whether people think of liberals as changers and conservatives as defenders of the status quo, but it’s a worldview that frames the left as people who do stuff to try and make things better and the right as the meanies who just want to stop the left from making everything better.

It puts the right on defense, which only reinforces the perception that the right is in fact somehow revanchist.

Well, I for one am sick to fucking death of being defensive.

Getting the better world I want for my children, and everyone else’s, is going to take more than slowing the left down or simply preserving what’s best about America: it’s going to take an enthusiastic, energetic, optimistic right that can project its vision of liberty, prosperity, and equality before the law as something worth aspiring toward—in America and in Denmark.

And let’s face it: “Stand athwart history and shout stop!” was never much of a rallying cry.

Good post, Greg. Bill Buckley’s famous Publisher’s Statement in National Review with the “athwart history” line – while certainly a vivid and memorable image – always felt off to me. Many excellent people went around happily and approvingly quoting Buckley in the more than half century following 1955, turning it from a good line in a magazine to a central statement of purpose for an entire world view, and it took a long time before I uncovered why it made me uncomfortable: It basically painted conservatives mainly as the party poopers or the “Karens” (to use a more recent term). As you correctly point out, it is in fact a terrible rallying cry and should be discarded.

The point is not to automatically stand athwart History and yelling stop. That is a very simple algorithm requiring nothing of the individual. The point is to know when to yell stop. And that requires knowledge of humans and of human history. We have only two sources of learning about human nature: our own experience and history. The young have very limited experience and we have now engineered our societies so that history is hardly even taught anymore. Small wonder that education in other areas is in shambles, and that accordingly the wheels are coming off Western Civilization.
Instead we seem to have adopted Sam Cooke’s Wonderful World as the polestar: Don’t know much about <insert here>, but surely good intentions will be enough?

They must be enough! I was specifically told, often, by many different people, that good intentions actually lead somewhere! Or at least they paved the road to somewhere. Can’t remember where, exactly, but obviously somewhere good, right?

Good point about the trick being knowing when to shout stop: how useful is a car with great brakes but no accelerator?