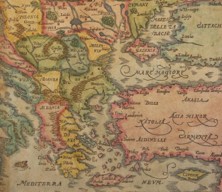 It’s difficult, maybe impossible, to identify the historical moment one occupies. We’re all caught in the swirl of a thousand different currents at any given moment; the idea that we can somehow lift ourselves outside of it seems almost hubristic.

But it’s worth a shot.

So: in which age of man do we live?

That decision will ultimately be made many hundreds of years down the line by descendants who’ll be less interested in any particular people or events than they will be in tracing their own present back to whatever big currents were discernible in our era. What’s obvious to them then may be completely invisible to us now.

We talk of the Enlightenment, the Renaissance, and other historical eras as though they were actual things. As though we could travel back in time to 1555 and ask some random Neapolitan merchant how he thought the Renaissance was working out so far.

It’s unlikely you’d get an answer like: “Oh, marvelous! Got a really good feeling about this Renaissance. It might even lead to an Enlightenment!”

More likely he’d flee you for fear of catching plague: 1555 was the year in which the term “Black Death” first entered usage.

But what would you say to someone from the future materializing beside you and asking how it felt living through whatever insane name he or she applied to our era? What would your reflections be on your life in the Age of Zog?

We’re all wrapped up in our own lives, trying to make sense of things as best we can, muddling along in an unscripted play with no director or stage manager, and the reviews won’t come out until centuries after we’ve left the stage. If we try to step out of ourselves for a moment, however, if we try to crawl up out of our immediate circumstances and stimuli and appetites and preconceptions—and I emphasize try, since successfully doing so would be impossible for creatures like ourselves—if we try to get up to a higher plane and view human civilization from afar, what can we see?

Seat thyself sultanically among the moons of Saturn, and take high abstracted man alone; and he seems a wonder, a grandeur, and a woe. But from that same point, take mankind in mass, and for the most part, they seem a mob of unnecessary duplicates, both contemporary and hereditary.

Kind of a downer, that Ishmael, but never mind: what’s this mob of superfluities up to?

Extend our sultanic view not just from a cosmic distance, but allow it to encompass the broad stream of time. What can we see? Only a few thousand years of development with any accuracy: everything before that’s a blur and the future is a fog.

The broad strokes seem to be driven by technology: from fire and the wheel to gunpowder, the printing press, and the steam engine: this plodding bunch of blockheads gets knocked into a tizzy with each big technological advance. As the new technology spreads, the groups quickest to adopt it grow in strength and confidence and exert that power outward, often by force of arms but sometimes—once in a blue moon—by the sheer power of the ideas unleashed (or enabled) by the technology. Which in turn produces more innovation, producing more reactions, and so on.

So if we survey the changes wrought upon the woeful chowderheads of earth by the last half century’s advances in technology, alongside everything else going on, does anything catch the eye? Did I say half century? Too short. If we broaden our scope enough to take in the last couple of centuries and condense them into a sentence or two, what happened? What’s happening?

Remember, it’s the whole world we’re looking at, the whole variegated gamut of humanity, all the way around the planet.

From my own seat on Titan, I’d say those boneheads of earth have been undergoing a process of accelleration. Processes, plural. Of every kind: economic growth, scientific knowledge, population, technology, communication. Looking at the really big picture, the knuckleheads of Earth haven’t actually changed so much as sped up over the past two centuries. They’re living longer, healthier lives, and that’s all to the good, but those better lives are being invested right back into the process of continuous accelleration. Which brings health and longevity to still more of them, allowing even more investment into the great project of speeding things up, and so on.

This accelleration hasn’t been evenly distributed, however, and that’s created some friction.

“Everything sped up from the 1800s through the first decades of the 21st century, but it did so unevenly and that caused some dangerous chafing.”

I don’t think that’s any more remarkable than saying “the western Roman Empire collapsed in the fifth century, creating a power vacuum that resulted in a few centuries of European stagnation and reorganization.”

So why have I whisked us up to the moons of Saturn for such a view? Because I’m seeing more and more headlines like this:

Berlingske by the Polish border: Here in “the zone,” the migrant crisis has changed everything: “Without us they’d just die.”
Emil Rottbøll & Niel Ahlmann Olesen, Berlingske.dk, Nov 14

True to form, in an “explainer” on the crisis—everything’s a crisis these days; establishment journalism would perish without the word—CNN concedes that most of these migrants are “from the Middle East and Asia, and… hoping to travel on from Poland deeper into Europe,” but then repeatedly casts Poland’s unwillingness to welcome them as a distasteful form of nationalism:

Polish President Andrzej Duda visited the border last Thursday in a show of solidarity with the military, police and border guards. Earlier in the day, Duda addressed thousands of Poles who marched through Warsaw to celebrate Independence Day.

In a speech with nationalistic references in support of the government’s strict policy of keeping the border with Belarus closed to migrants, he said: “We have always been, we are and we will be part of a Europe based on Christian values, which are also the foundations of our tradition and culture.”

“The time has come when you need to defend your homeland. But we need to guard its borders more than before,” Duda said, adding: “It must be done with dedication, with sleepless nights, in coldness, in hardship, in a very ungrateful situation to which we were forced by the hybrid actions of the Belarusian regime against Poland and against the European Union.”

Humanitarian groups are accusing Poland’s ruling party of violating the international right to asylum by pushing people back into Belarus instead of accepting their applications for protection. Under article 14 of the Universal Declaration of Human Rights, everyone has the right to seek and enjoy asylum from persecution in other countries. Poland says its actions are legal.

There’s a lot to pick apart in there—a lot that ought to be shredded to bits—but those of us gazing down from Titan can’t be distracted by a little sideshow between Belarus and Poland. Or Mexico and the United States. Or Turkey and Greece. Or China and Taiwan. Or anywhere else.

A question worth pondering from our seats on Saturn’s moons is where the concept of the nation state is headed.

Are nations entitled to determine who may and may not join them as citizens? If not, what is a nation? What defines the reach of a people’s laws? Is there some new notion of human organization taking shape? Has anyone articulated it? Has anyone voted on it?

If nations do retain that very elementary right, what’s the source of all this angst about borders being defended? Why shouldn’t they be? Why is it problematic to assert that one’s nation has a character and one intends to preserve it? Italians and Mexicans and Thais and Finns and Egyptians are different. We all know that. They’re all people, but people steeped in different traditions, customs, mores. That’s because Italy, Mexico, Thailand, and Finland are, believe it or not, different.

Seated here on Titan with the whole long timeline of human history before us, we can see the ebb and flow of nations over time: the rise and fall of empires, the expansion and retraction of cultures. We see borders moving, always, since time immemorial. It’s part of the tide of human affairs. Borders move and change but the idea of borders does not. Or has not.

What is this thing we’re seeing now, the increased unification of national purposes at the highest levels and the shrugging off of borders down on the ground? How can Europe be united if the idea of a border is hateful to Europeans? How can America hold itself together if her states aren’t permitted to hold themselves intact? How can anyone defend the idea of sovereignty for Taiwan or Tibet without acknowledging the necessity of lines delineating where they begin and end—and their right to defend those lines from hostile strangers?

Are we living the age of man where we’ve moved beyond borders? Are we somewhere in the Age of the End of the Nation State?

If so, I think I really might prefer to be seated on Titan.