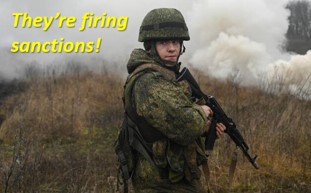 I’m a citizen of a European country, I’ve lived in Europe for the past 19 years, my two teenaged daughters have lived their entire lives in Europe, and three of my four grandparents were American-born children of European parents.

But I don’t feel European.

That’s the great problem of the EU: it’s less a superstate than a superbureaucracy, and no one gets the warm fuzzies about a bureaucracy. A flag and an anthem do not a people make.

That much said, I tried to think of myself as a European while I mulled over DR’s latest offering on the Ukraine situation:

Russia’s armament near Ukraine has EU “preparing for the worst”
Per Bang Thomsen, DR.dk, Dec. 13

First of all, as a 21st century European, I don’t think of Ukraine as Europe. I think of it the way I think, as an American, of Puerto Rico or Guam: some distant and not terribly important land with only a tenuous connection my country. (I know, I know: but I’m talking feelings, not facts.)

That’s wrong: Lviv is just a smidge farther from me right now than Chicago was from my apartment in New York. It’s closer than the city of Denver was to my apartment in Los Angeles.

But those are mere facts. In every other sense, Ukraine is worlds away from me.

I don’t think I’m unique in feeling that way, either as a Dane or a western European.

These are my emotions, remember. My feelings as a European.

The lede of the article, however, gets my immediate attention: “The EU countries are ready to hit hard at Russia if it attacks Ukraine.”

Holy shit, this isn’t remote and metaphorical: the EU is getting itself on a war footing to push back against a possible Russian invasion of Ukraine!

It’s deeply worrying to Denmark and the other EU countries that the Russian government has recently sent thousands of extra soldiers to the country’s border with Ukraine.

The member states therefore now stress that there will be serious political and economic consequences for President Vladimir Putin and the rest of the Kremlin regime if they choose to attack their neighbor.

Russia’s massing troops and arms and telegraphing its intentions of invading Ukraine; the EU is threatening to “hit back” at Russian troops, tanks, and planes with “political and economic consequences.”

How many divisions of political consequence will it take to defend Ukraine, I wonder?

How many divisions of economic consequence to repel the army massing on her border?

If Europe’s strategic goal is to keep Ukraine within the European sphere, has anyone asked themselves how Ukrainians will feel about Europe if it stands idly by while the Russian military invades their country?

“Well, sure, they invaded you, but we asked them not to, and now we’re really going to hurt them economically” may not be quite enough to persuade Ukrainians we ever really gave a damn about them.

Will Ukrainians who’ve lost their businesses, homes, and loved ones look lovingly at Europe and think, “Thank goodness the EU didn’t sully its moral principles by getting dragged into a military confrontation with Russia! Now that Russia has invaded us, the EU will unleash such an apocalyptic storm of political and economic consequences that they’ll wish they’d never razed my home, raped my daughters, and killed my husband! I will always love Europe for their dedication to our security!”

According to the BBC, Western intelligence services estimate that there are currently up to 100,000 soldiers along the border with Ukraine, some of whom have arrived in recent months. And while EU countries continue to hope they can talk President Putin out of a possible attack, they are prepared to crack down hard if it should get that far anyway.

“EU countries stand united when it comes to supporting Ukrainian sovereignty and territorial integrity. And all the ministers said today very clearly that any attack on Ukraine will have political consequences and high economic costs for Russia,” stated the EU Foreign Minister, Josep Borrell.

Since 2014, when the Russian government illegally annexed the Ukrainian Crimean peninsula, EU countries have continuously imposed economic sanctions on a total of 185 people and 48 units.

EU countries are prepared to “crack down hard” in defense of “Ukrainian sovereignty and territorial integrity” by doing the same thing they did when Russia seized Crimea.

But if the sanctions imposed on Russia after their “illegal annexation” of Crimea were successful, why are there 100,000 troops threatening Ukraine?

Unless the EU wants to make the case that the tactic was successful because Putin waited seven whole years to prepare a full-scale invasion of Ukraine.

So just imagine how long he’d wait for his next invasion if we hit him even harder this time. With our sharpest and most lethal sanctions! Oh my god, do the Geneva Conventions even allow this level of sanctioning?

(According to Borrell) …the main goal now and here is to prevent the crisis from developing into a real military conflict at all.

That has to be done by “deterring” the Russians and talking them into reason, he explained.

“In a situation like this, you have to hope for the best and prepare for the worst,” said Josep Borrell.

By “the worst,” I think it’s safe to assume he means a Russian invasion of Ukraine.

But I’m not sure what he means by “prepare for.”

Is there some secret chamber in Brussels in which the continent’s leading accountants are being assembled in a kind of Manhattan Project of sanctions design?

As a European, I lift my lonely eyes to look for allies. And what do I see?

And on Sunday the G7 countries, which in addition to the United States consist of Germany, France, Britain, Italy, Japan and Canada, also warned of “extensive consequences and high costs” if the Russian government continues its military aggression against Ukraine.

Here, the seven major industrial nations also confirmed that they stand shoulder to shoulder with the Ukrainian government, which they also praised for not having done anything to fuel the conflict. For all intents and purposes, the G7 countries want to prevent Ukraine from provoking Russia, so that the government is given a pretext to do more than is currently the case.

This is all very silly.

Russia seems to be saying, “I think we’d like to invade Ukraine. We’re certainly ready to. Nervous? You should be. Now give us a good reason not to—or get out of the way.”

And the west is basically saying, “We won’t do anything to stop you, but if you go through with this it will make us very angry and we’ll do everything we can to hurt you economically. And Ukraine, please remain silent and assume the position.”

It’s an interesting tactic to take when Europe has been lobbying for years to make itself dependent on Russian gas via the Nordstream 2 pipeline.

In a not unrelated story, Germany just announced today (December 14) that it could no longer approve the pipeline from Russia:

The German foreign minister, Annalena Baerbock, said the Nord Stream 2 pipeline could not be given the green light in its current form because it did not meet the requirements of EU energy law.

Baerbock added that the escalating tensions on Russia’s border with Ukraine, where the Kremlin has reportedly amassed 100,000 troops, was “also a factor” because Berlin had agreed with the US that the pipeline should not be used as a political weapon in Moscow’s deteriorating relationship with Kyiv.

As a European, I’m astonished that people so unutterably stupid are calling our shots.

“Berlin had agreed with the US that the pipeline should not be used as a political weapon in Moscow’s deteriorating relationship with Kyiv.”

These idiots handed Russia a loaded gun, aimed it at themselves, and then agreed that it should not be used as a weapon.

“Man, these drug dealers are really making a wreck of our neighborhood.”

“I know. But I just signed a deal with them to bring us our groceries once a week.”

“That’s great. But that won’t get them out of our neighborhood.”

“No, but let’s just agree that the grocery deliveries shouldn’t be used as a political weapon.”

As a European I’m glad the four G7 countries that aren’t in Europe share our concern for the fate of Ukraine, but I can’t expect America, the UK, Japan, or, god help us, Canada to respond any more forcefully to Russian aggression on our borders than we’re willing to ourselves. I can’t and I don’t.

(As an American, I’m very much in favor of Europe handling this on its own. Don’t want to pay your NATO dues? Fair enough. You may now find there are other dues to be paid in another coin.)

As a human being, I don’t want armed conflict anywhere, ever. It’s a horror.

But when an army masses on a border, there has to be some credible threat of military retalition.

I wanted to mitigate that sentence somehow: to make it softer and less militant sounding. It can’t be done.

Maybe I’ve got this all wrong.

But as a European, my gut tells me this ends in one of just two ways: the west concedes to Russian demands that Ukraine never be admitted to the EU or NATO (etc), or Russia marches into Ukraine and we impose sanctions that our leaders assure us are unprecedented in their scope and power.

And either way, sometime around 2025 there’ll be Russian troops massing on the Estonian border.

Ah yes, the transnational school of diplomatic thinking, so popular with the UN, EU, and Davos set of people. I don’t think one can improve on the comment of this line of thinking made by Team America https://www.youtube.com/watch?v=UIPSvIz9NDs

EU: <Do what we want> or else!
Russia: Or else what?
EU: Or else we will be very very angry with you. And we will write you a letter telling you how angry we are!

Been a long time since I’ve seen that movie, I need to make a point of watching it over Christmas vacation…