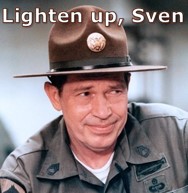 There was a story in Berlingske Tidende yesterday about something I’d caught in the English language press a week or two ago: the Scottish Ballet’s plans to “help drive anti-racism” by introducing changes to their annual production of The Nutcracker.

The headline on the Berlingske story by Amalie Haun is “Famous Christmas classic being remade: Will eliminate stereotypical representations.”

It also describes similar efforts at Berlin’s Staatsballett and Denmark’s own Royal Theatre.

They’ve also determined that “the girls must also carry toy drums, just as the boys have dolls in their hands.”

Big problems. Glad they’re on it.

It all seems very harmless and innocuous, but from “cultural reforms” like it’s just a hop, skip, and a jump before you find yourself reading stories like this:

Because it’s a Ritzau wire service story, you can find it all over: on DR.dk, for example, and at Berlingske and Ekstra Bladet.

Among other things, conscripts at the Leadership Regiment in Enköping in Uppland have allegedly been forced to participate in activities despite illness and injuries.

According to the Swedish media, the soldiers report a lack of food and sleep, punishment, “inappropriate jargon” and sexist language during the training.

“We have seen that there are conscripts who have experienced behavior that is not in order with us at the Command Regiment,” says the regiment’s communications manager, Therese Timpson, to Dagens Nyheter, according to the Swedish news agency TT.

Were they forced to point their fingers in the air? Wear harem pants? Were the girls and boys given stereotypical weapons to carry?

My understanding of the military is clearly behind the times. I thought its purpose was to kill people and break things. I thought military training was about toughening soft civilians into hardened fighters. To defend the homeland.

So I certainly agree that soldiers complaining about food, sleep, and “inappropriate jargon” ought to be sent home—as failed soldiers.

During this week, the commanders of the Command Regiment in Enköping will complete a crash course so that they will be better equipped to handle the problems.

In addition, the Leadership Regiment has set up a working group to develop a plan for how the training of conscripts can be carried out in a better way next year.

Let’s make sure all our soldiers get eight hours of sleep and three square meals a day (preferably organic), and that their tender ears are spared any of the language varietals once referred to, ironically enough, as “soldierly.”

I want to be careful here: I haven’t seen a single version of the article in which anything but ambiguities are described. If these Swedish soldiers were genuinely abused—deprived of sleep for extensive periods of time, starved, forced to participate in physically strenuous activities while seriously and dangerously sick or injured, sexually assaulted—then there’s certainly something that needs to be addressed.

But “inappropriate jargon” and “sexist language?”

What on earth could someone say, what combination of Swedish words could be so intolerably offensive, that soldiers couldn’t be expected to endure it? That their commanding officer could send them home to recover from the horror of the words? That senior officers would be compelled to review the situation?

If such words exist, could we not weaponize them for use against our enemies?

Could we train Ukrainians to use them against the Russians menacing their border?

And how can we prevent these dangerous words from leaking into civilian populations? Do we need airport vocabulary checks to ensure air safety?

And why have these soldiers not been exposed to rap music? Shouldn’t that be part of basic training? I thought it was settled science that exposure to rap music builds up immunity to inappropriate jargon and sexist language. Isn’t that why we’ve been flooding popular culture with it, to build up our defenses against any enemy that might think to use words against us?

After all, the weaponization of language has a long and distinguished pedigree, as this 50-year-old documentary from an esteemed group of British historians illustrates:

With all this hysteria and bed-wetting over symbols and words, is it not safe to conclude we are in fact the most equitable and tolerant civilization in the history of the world?

That is, if we’ve reached the point where we fret that soldiers are being wounded by words, and that patrons of the ballet are so ignorant and uneducated that they cannot be exposed to costumes or gestures or props that might be construed as somehow racist or sexist—if we’re going to get our collective panties all bunched up over such trivialities as these, then surely we must be doing all right in the realm of actual deeds, right?

Who would have time to worry about soldiers being offended by words if there were an actual war being waged?

Who would dedicate valuable time working to ensure that the heroine of a gay man’s Christmas fantasy ballet wasn’t being inappropriately stereotyped, and who would give a damn if she was, if the world outside the ballet were a Hobbesian horror show?

Sticks and stones may break your bones, but names will never hurt you.

Unless you let them.

So while I’d never advocate the use of demeaning language against anyone who wasn’t already pelting me with the same, I think it would behoove the lot of us to focus less on finding all the possibly offensive things out there in the world, and more on strengthening our own resilience.

Which is, I suppose, just a roundabout way of saying lighten up, Francis.