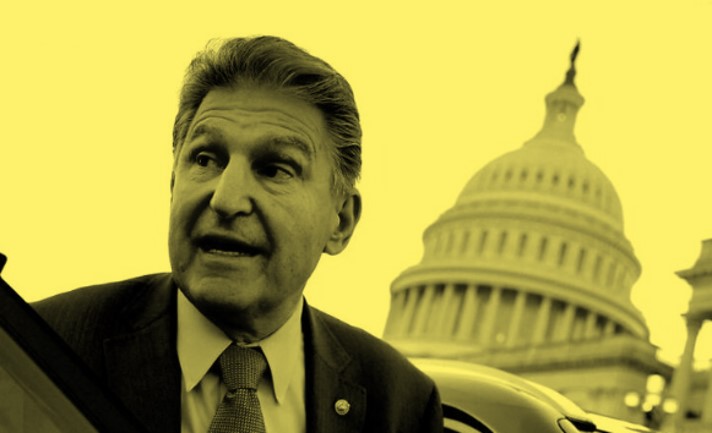 The headline of Kalinka Aaman Agger’s Monday piece in Berlingske has the sound of a horror movie tagline: After the election it was the scenario they feared. Now it’s happened.

Democracy is hanging on a thread. The Republic is on the brink of collapse. Cats are making bedroom eyes at dogs.

The rules of the Senate of America’s democratic republic say it takes 51 votes to pass a bill, or 50 if you’ve got the tie-breaking Vice-President on your side. (Typical bastard rules made by white colonial imperialist bastard people.) The Democrats have the Vice-President on their side, but suddenly they have only 49 votes in support of President Biden’s gazillion dollar “Build Back Better” plan… the plan that has to pass if the world is to continue rotating on its axis and keeping us all alive—and aware of our privilege.

Because a Democratic senator from a profoundly conservative state has declared his opposition to the bill.

His support had always been uncertain at best, but Senator Manchin finally came out against the bill this weekend. Adding insult to injury, he did it on Fox News Channel.

In telling the story of Manchin’s public repudiation of Build Back Better, Agger cites only left-wing outlets The Hill and the Guardian. Despite repeated references to Fox News Channel and the Fox News Sunday program on which Manchin made his statement, Agger includes not a single reference or citation from the right until the very last paragraph of her article:

While Manchin has not garnered much praise in his own party, the enthusiasm is on the other hand great among Republicans. Among other things, Senator Lindsey Graham has welcomed his decision.

“Has not garnered much praise from his own party” is surely the Most Ginormous Understatement of 2021.

Jen Rubin of the Washington Post says “Manchin deals a devastating blow to Biden and democracy.”

Representative Alexandria Ocasio-Cortez, standard bearer of the progressive left, expressed herself with her trademark blend of rancor and cluelessness:

Ocasio-Cortez also called Manchin’s explanation for opposing BBB “a farce” that can’t be taken at face value. “In terms of plain democracy,” she said, “I represent just as many people or more than Joe Manchin does.”

In terms of plain reason, it’s impossible (as usual) to see what kind of point she’s trying to make.

As a U.S. Senator, Manchin is one of two Senators representing the state of West Virginia; as the Representative for New York’s 14th Congressional District, Ocasio Cortez represents one of 27 districts in the state of New York.

Ocasio-Cortez thinks, acts, and speaks like a child—a spoiled, pampered child who’s going to hold her breath until Daddy stops being such a jack-booted fascist bastard and buys her that pony. No, not that one, the pretty one!

Agger quotes another Democratic Congresswoman—Veronic Escobar of Texas, whom Agger mistakenly identifies as a “Democratic Senator from Texas”—as saying that “to reject ‘Build Back Better’ is at the end of the day to ignore the crises in front of us that demand action. This is the height of irresponsibility and treason.”

A devastating blow to democracy!

In 2020 Trump carried West Virginia by 69% to 30%. In 2016 he carried it over Hillary Clinton by an even larger margin. It’s politically one of the most conservative states in the union. The wonder isn’t that Joe Manchin finally came out against Build Back Better: the wonder is that a senator from West Virginia was even thinking about supporting it.

As Agger’s headline makes plain, the Democrats have known since the dust settled on the 2020 election that their Senate majority was fragile. Worse than fragile: it’s not even a majority. They have 50 Senators on their side, just like the Republicans. The Democrats only have the advantage because Senate ties are broken by the Vice President. By her lone vote—that’s worth keeping in mind any time you hear someone complaining about how “undemocratic” it is that Joe Manchin’s single vote should havesuch oversized power.

Democrats hardly hold a dominant hand in the House, either: if just five representatives out of its 435 members switched from the Democratic to the Republican party, the Republicans would have the majority. (It’s currently 221-213, Democrats—one Democratic member died in April and has not yet been replaced.)

At the end of the day, here’s what we have: an unpopular president trying to force an unpopular bill through Congress, and a pragmatic Senator unwilling to sacrifice his office on the president’s behalf.

That’s it. Nothing more. Nothing less.

“Build Back Better” isn’t the be-all and end-all of American legislation. Love it or hate it, it’s just a very big and very expensive ball of policies cobbled together with spit and scotch tape. Its failure isn’t the end of the world: if some part of it is indeed so wildly important that America genuinely couldn’t get on without it, there’s no reason Congress couldn’t draft and pass a bill specifically addressing that particular element.

Biden’s the one that turned this into an all-or-nothing circus: if it comes up nothing, that’s on him.

Manchin’s rejection of BBB isn’t a threat to democracy: it’s democracy in action.

And if you can’t get a majority, it’s because (ipso facto) the majority is against your bill.

And you can’t pass a bill with the majority against you.

Is it not telling that the people screaming loudest about Joe Manchin’s treasonous betrayal of democracy are, in so doing, actually demanding that the will of the minority be obeyed?