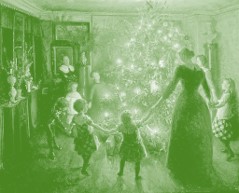 And yet it was never my intention to raise my own children with Danish Christmases.

I wanted my children to grow up with American Christmases. I wanted them to lie twitching in bed on Christmas Eve, visions of sugar plums tormenting them, ears perked for any sounds of sleighbells or hooves on rooftops, desperate to stay awake long enough to catch a glimpse of the magical man in red.

I wanted them to wake up on Christmas morning at some obscenely early hour, terrified to violate Christmas protocols by setting foot outside of their bedroom before whatever time we’d agreed on, but too shivery with anticipation not to try and sneak at least a look at the Christmas tree, under and around which they knew would be a whole slew of presents that hadn’t been there when they went to bed. And the stockings! Those things that had been hanging so limp and lifeless for days or weeks would now be magically stuffed to bursting with candy and nuts and and little silly toys.

I envisioned Herself and I sitting in stately robes and looking on over our mugs as our offspring tore into their gifts with reckless, heedless, manic joy.

And then, after the last gift was opened and the wrapping paper and ribbons and packaging materials had been gathered up and consigned to the trash, we’d seat ourselves around the dining room table for a leisurely breakfast or brunch of bagels and lox and white fish and coffeecake and pastries.

That’s what I wanted for my kids because it’s what I had myself. Boilerplate New England Christmas.

Herself was aware of these traditions, because we had been living together in New York before we moved to Denmark and frequently spent Christmas with my family, including my very young nieces.

The closest thing we ever had to a hybrid Christmas was our last one in America: rather than drive up to spend Christmas Eve at my parents’ or sisters’ house, we had something like a Danish Christmas with just the two of us in our New York apartment. It wasn’t really like a Danish Christmas, except insofar as we had a very nice dinner and afterwards we opened all our gifts to each other. My big gift to Herself was a ring and a proposal of marriage. Her big gift to me was a single syllable: yes. We then drove up to celebrate American Christmas with my family the following morning.

I remember thinking at the time that this was a foretaste of Christmases to come: we would find a way to blend our traditions together. Our children would grow up with a set of Ameridansk or Danerican Christmas traditions uniquely their own.

Our first Christmas in Denmark followed the Danish model, and I went along with it merrily because I wanted to experience at least one unadulterated ordinary Danish Christmas. Herself and I had been married that summer: I was now bound by marriage to Danish culture.

It did end up being entirely Danish, but hardly ordinary.

Herself had come home from work a little early one afternoon a week or so before Christmas and announced that she was taking me to Tivoli for dinner. I’d never been to Tivoli at Christmastime, and she said it was an experience she wanted me to have. She took me to the traditional Christmas buffet at Promenaden, where we ate pork roast and duck and red cabbage and glazed potatoes and sipped wine while overlooking the splendor of Tivoli’s Christmas illumination. After the meal she slid a little gift across the table to me.

“You didn’t say we were going to do gifts,” I protested. “I could have brought one for you, I feel bad now.”

“Open it,” she commanded. I obeyed.

It was a thermometer.

“A thermometer?” I asked.

I looked again: it wasn’t a thermometer, but I was damned if I knew what it was or why I should be happy to have received it.

I was baffled—until suddenly I wasn’t. Something clicked and I realized that it was a home pregnancy test and there were lines on it.

A quick glance at Herself’s face spared me the trouble of asking what the lines meant. I was floored. I wish I had said something clever or romantic or touching, but all I managed to say was, with a lot of excitement and a little too much volume:

“Are you shitting me? There’s a baby in here?”

All my other memories of my first Danish Christmas are therefore less about Christmas than the magical excitement of my pending fatherhood. It was still too early to announce, so we went through the holiday biting our tongues and just bursting with the urge to tell everyone that this greatest thing in the world had finally happened for us. (We’d been trying for years.)

Eldest was born that summer, so the next Christmas was our first as parents.

I no longer have the sequence straight in my head, and am too lazy to do the digging around required to get it all right, but the next few Christmases were either Danish or American, but never a blend. Either we were in Denmark following Herself’s traditions, or in America following mine.

Our American Christmases were logistical nightmares: it’s a bad time of year to travel in the northern hemisphere to begin with, illness is around every corner, jetlag is no respecter of holidays, and all the stress of holiday preparations is difficult enough without all those force multipliers. So at some point in the late 2000s we made the decision that we would henceforth only visit America in summer.

Every Christmas since then has been spent in Denmark.

This year was going to have been our first Christmas in America since then: my sister’s family and my own were going to join my parents in Florida for the first full American family Christmas ever.

Those plans had to change—we’re not going to dwell on that—so here we are.

It’s the morning of the 24th as I write this: Christmas Eve. In Denmark.

The rest of the morning and early afternoon will be spent finishing up all the preparations: gifts will be wrapped, food cooked, the house cleaned.

At the appointed hour this evening our guests will arrive. There will be a ruckus in the kitchen as herself and her mother, Mormor, jostle to get the timing of all the various roasts and sauces and side dishes right; there will be panic in the living room as Youngest realizes we only have two minutes before the last episode of the Christmas Calendar we’ve been dutifully watching every evening since the first of December. The rest of us will mill around aimlessly, obeying any orders shouted out to us from the kitchen.

At last it will be time to sit and eat. There will be roast duck and roast pork, gravy, brown (glazed) potatoes, and warm red cabbage. After the meal there’ll be risalamande (think tapioca) with cherry sauce, and someone will find the almond in their pudding and hide it until everyone else is done: they’ll then present the almost and claim their prize. When the girls were little they always both got almonds; the rules seem to have changed a few years ago. (Mormor makes the rules and I don’t question them.)

After the risalamande the table will be cleared and there’ll be a game or two, usually with little prizes for the winners.

Then we’ll lower the lights, don our Santa hats, and move to the tree. In the past we always lit real candles on the tree at this point, which always made me a little nervous: this year Herself got some remote-controlled LED candles so we can have the effect without the fire hazard.

We’ll then encircle the tree, hold hands, and sing Danish carols I still haven’t learned well enough to sing as we shuffle around the tree. The last song is always Nu er det jul igen, the very easy words to which I actually do know, so this is tyrpically the point where I join the group again (having earlier excused myself to take some pictures while the others sing the songs I don’t know in tones I can’t reach).

Nu er det jul igen isn’t like the other songs. Because it’s the very last song, the kids know that what comes next is the opening of presents—so the energy suddenly surges, and the song lends itself to all kinds of craziness. It ends in what I can only describe as a manic Christmas conga line: the circle around the tree is broken, and someone leads the line all through the house on a long and winding adventure including plenty of roundabouts and awkward u-turns in narrow spaces: finally the line returns to the tree, becomes a circle again, a final verse is sung, and that’s it: it’s time for the gifts.

Because 80% of this blog’s traffic comes from outside Denmark, I should share an English translation of Nu er det jul igen:

That’s literally it. (It scans better in Danish because jul is just one syllable and fasten—Lent—has two.)

It’s an easy song without many words and it’s short, so it can just be infinitely repeated. And it is. It’s the last chance to really torture the kids, whose patience is always at its breaking point by now.

Our own family tends to start slow and gradually speed up the tempo until by the time we’re finally through everyone is red-faced and winded. (Come to think of it, that may be part of the reason for the tradition: tire the damn kids out a little!)

Finally comes my own favorite part of the holiday: all the hard work is done and all that’s left to do is pour myself a generous scotch, settle back into the couch, and watch the kids go amok.

Our one nod to American tradition is the stockings: as we explained to the girls when they were little, the Danish Santa who lives in Greenland brings presents by our house ahead of Christmas Eve so the girls can open them that evening, but the American Santa who lives on the North Pole swings by on Christmas Eve itself, so stockings are never full until Christmas morning. (And for a few years we left out milk and cookies for American Santa.)

I’m not saddened to have lost our American traditions because the Danish traditions have worked out just fine for our little family, and I’ve come to appreciate that what’s important isn’t what your traditions are, but that you have them.

As Tevye says in Fiddler on the Roof: “You may ask: where did this tradition come from? Well, I’ll tell you: I don’t know. But it’s a tradition!”

Merry Christmas, whatever your traditions are and wherever they came from.

What did socialists use before sails?