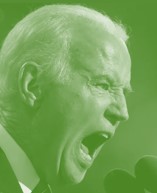 Mads Fuglede is a member of the Danish parliament for the (ostensibly) right-of-center Venstre party.

On Sunday he penned an opinion piece for the (ostensibly) right-of-center Berlingske Tidende.

In his byline, Berlingske identified him not only as a member of parliament, but also a “U.S. Analyst.”

One would have been disappointed—and quickly.

American politics is locked up by two men who are shadowing eachother
Mads Fuglede, Berlingske, Jan 16

In the very first sentence, Fuglede refers to Biden’s January 6 “knife at the throat of democracy” speech as “perhaps his best speech as president.”

Fuglede’s license to provide U.S. analysis should be revoked for that observation alone.

He concedes that “Biden’s best speech as president” is a pretty low bar to clear and then continues undaunted:

But the speech about Trump (whom Biden still refuses to call by name) and the attack on American democracy last January was a good speech. Even when comparing it to some of the best rhetoricians in office, the speech was good. The president seemed angry, indignant, and sincerely interested in his subject, which often yields a good result.

It’s not clear what Fuglede means by “good” in this context.

A good political speech is one that achieves, or at least advances, a particular political objective.

What objective did Biden achieve or advance with his speech?

This president always seems angry and indignant—and confused—and not just “sincerely interested in” but downright obsessive about the subject of You Know Who’s perfidious intentions.

The only measure of a speech is whether it accomplished what it was intended to accomplish.

For example, early in the 2008 Democratic primary campaign Hillary Clinton’s campaign was getting a lot of traction by emphasizing Barack Obama’s ties to the Rev. Jeremiah Wright, whose anti-American preaching gave them an almost unlimited supply of ammunition. Republicans were licking their lips over the prospects of using it against Obama on the general election. On April 28 of that year, Rev. Wright gave an address to the National Press Club in which he presumably hoped to explain his views to the American people in a way that would make him less of a liability to the Obama campaign. The speech was a disaster—not because of his words or phrasings or style, but because it had the opposite of its intended effect. It horrified middle America. (“I’m not a vampire—I just enjoy sucking the blood out of people’s necks and sleeping in coffins.”) The Obama campaign reacted immediately: the very next day Barack Obama gave a speech in North Carolina in which he threw his old mentor under the bus. That was a good speech not because of its words or phrasings or style, but because it had its intended effect: it saved Obama’s ass.

Joe Biden gained nothing by his January 6 speech. We know this because it made no dent in his wretched approval numbers and he has experienced nothing but political losses since he delivered it.

Fuglede points out that polls show most Americans don’t believe the 2020 election was marred by fraud or that Donald Trump should be president, and that a majority of Americans believe that Trump has a responsibility for the “attack on Congress” on January 6.

(“Attack on congress” is certainly a colorful way of phrasing it, but that’s the phrasing that the ABC-Ipsos poll went with so we can’t fault Fuglede for using their language.)

Fuglede wraps up his opening by saying “So far, so good. When Americans are talking about Trump, it works to Biden’s advantage.”

As we’ve already noted, there’s nothing to support that premise. There is no evidence that talking about Trump accomplishes anything for Biden: it doesn’t move his approval numbers up or help him politically.

And as a story today from the Daily Wire makes clear, American voters are ” ‘Frustrated’ With Biden Ignoring Economy, Inflation, Focusing On Issues They ‘Don’t Care About.’ ” That quote is from the title: if you click through, you can read about the CBS Poll released on Sunday that shows (among other things) only 33% of Americans believe Biden is focusing on issues they care a lot about. The CBS poll is basically a refutation of Fuglede’s entire point.

And it doesn’t end there.

Just a few weeks ago, a Morning Consult/Politico poll found that “More Voters Want Trump To Run In 2024 Than Biden.” (It’s a badly written headline that seems to be saying that there are more voters than just Joe Biden who want Trump to run in 2024, but that’s just the way things are in this sloppy, stupid world.)

There’s a large enthusiasm gap between the two and their bases, with only 35% of Democrats believing Biden should definitely run, compared with 49% of Republicans who definitely want Trump to run.

Trump also has an enthusiasm lead among independents—18% said they definitely want him to run, but only 8% said that of Biden.

So on top of everything else, Fuglede might want to revisit his math: Americans view Trump more favorably than they view Biden at this point, which suggests little advantage for Biden in sniping at Trump and disparaging his supporters.

Moving on to his assessment of Biden’t actual problems, however, Fuglede opens with a sentence that should be preserved in amber as an example of understatement: “President Biden’s problem, of course, is that as president he cannot devote all his energy to talking about his predecessor.”

Fuglede also points out lucidly that “When Biden speaks of anything other than Trump, it doesn’t go as well.”

He points out that the president has tried (“There have been speeches about inflation, gas prices, unemployment, transitioning to a green economy, and so on”) and that it hasn’t done much good.

This means that American politics is locked in by two men shadowing each other. On the one hand, Trump is blocking Republicans from moving forward and rediscovering themselves beyond all the damage the former president has done to the party. On the other hand, Biden, like any other surfer, can only grab the good waves from the electorate when it’s all about Trump. It’s honestly a little bizarre to witness.

Everything in that paragraph is wrong. (And the surfing metaphor is itself a little bizarre to witness: “Biden, like any other surfer…”?)

The Republican Party wasn’t hurt by Trump: a lot of establishment Republicans were. And the majority of the Republican base was (and remains) just fine with that. Beyond that, it’s as though Fuglede doesn’t realize that Republicans have always been held in contempt by the American media: as though their unhinged contempt for Trump and his supporters were some novel new development in American politics. Need proof? Florida Governor Ron DeSantis is now already being compared to Hitler and described as “worse than Trump.”

The polling I cited earlier proves that Biden isn’t getting very good waves to surf with the electorate when he fixates on Trump (which is always), and Fuglede is correct that the waves aren’t much kinder to Surfer Joe when he wanders onto other topics (which is hardly ever anyway).

Fuglede’s diagnosis? Republicans should focus on conservative issues and keep talk of Trump to an absolute minimum, and “the United States seems to need Biden to announce that he knows very well that he is where he is mostly because Trump was so unpopular and that he does not intend to run again.”

But that, of course, would require a self-awareness on the part of both the current and former presidents, which would be humiliating for Biden and Trump to admit. And in politics—here and there—self-awareness is a definite shortage.

Fuglede’s whole column is a crystalline example of his last sentence.

Stripped down to its core, he’s saying: Joe Biden does great when he talks trash about Trump, because everyone hates Trump, but Biden can’t get any traction talking about anything else. So he should publicly announce that he’s not seeking re-election in order to give the Democrats a chance to “talk about everything they want.”

What sense does it make so say that Biden hurts himself whenever he tries to talk about the issues, so he needs to get out of the way in order to allow Democrats to talk more about the issues?

A more sensible analysis—and please take this for what it’s worth, since I’m neither an officially sanctioned U.S. analyst nor a member of parliament—would be that it’s the far left agenda Americans are rejecting, and that Biden needs to dump that agenda as definitively as Obama dumped his former pastor in 2008. Stop the insane spending that’s fueling inflation. Rein in the covid hysteria and stop dividing the country over vaccinations. Get the border under control. Abandon the attempt to drop the filibuster. Stop smearing half the country as insurrectionists and traitors and comparing them to Confederates, the KKK, the Jim Crow south, and Nazis.

As Rush Limbaugh observed after the 1994 Republican takeover of Congress for the first time in half a century, this is the Democrat’s eternal mistake: they never seem to understand it isn’t personalities that drive the American electorate, but ideas—and when Democrats or Republicans offer bad ideas, the electorate turns on them.

To go back to Fuglede’s strained metaphor, unlike other surfers, Joe Biden is trying to surf into the waves and he’s going to keep wiping out until he learns which way to point his board.