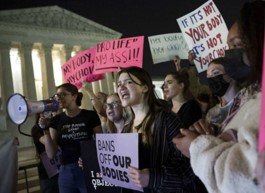 There’s obviously been big news out of America since my last post, but believe it or not I’m not going to write about JD Vance having won the Repubican primary for the Ohio Senate.

Instead I feel obliged to write about the other little story that broke Tuesday night: the leak of the Supreme Court’s draft majority opinion on Dobbs v. Jackson, in which the court appears to be (or to have been) prepared to overturn Roe v. Wade.

Leaked document: The US Supreme Court wants to abolish the right to abortion
Mikkel Danielsen, Berlingske.dk, May 3

Angry protesters in front of the Supreme Court after leaked document on the abolition of the right to abortion
Rosa Uldall, DR.dk, May 3

After sensational leak from the US Supreme Court: Abortion ban may be on the way in half the US
Philip Flores, Politiken.dk, May 3

I don’t have the time or interest in parsing the individual coverage. There’s coverage all over Denmark and it’s uniformly hysterical. Politiken even has an article suggesting that the Handmaid’s Tale is about to become a reality. But it’s not all bad news:

My translation may be a little too loose there, so he’s a more literal translation:

Majority will vote for pro-abortion candidates in US elections

See, it’s not all doom and gloom:

If the US Supreme Court decides, as expected, to remove the federal right to free abortion, it could drastically change the dynamics of the midterm elections.

Until now, Republicans have been big favorites to recapture at least one of the two chambers of Congress, which would allow the party to throw a wrench in much of President Joe Biden’s political agenda.

But that could change if a majority of Americans are serious about voting against candidates who want to restrict access to abortion, as these are primarily Republicans.

So the GLOB has that going for them, which is nice.

What all of this is missing is nuance.

Here’s the conclusion from the leaked opinion of the majority:

The majority is saying that there is no Constitutionally guaranteed right to an abortion and that abortions are therefore something for the people and states to work out on their own.

Different states are going to take different positions on abortion, just as they do on marijuana, driving licenses, and the handling of produce. Another Danielsen article in Berlingske includes a map indicating which states are likely to ban or restrict abortions, and which are likely to enshrine the “right” to an abortion into law.

(I use the scare quotes because nothing that compels other people’s labor can be an actual right.)

The map also illustrates why the “glass half full” perspective adopted by Ritzau—this is great news for the mid-terms!—may be unduly optimistic.

The American media are overflowing with stories about studies and surveys showing that most Americans favor keeping abortion legal. Your magnificent scrivener would be counted among such Americans, were any of the polling outfits ever to ask him. But surveys in which those surveys dig deeper into the issue also find that most Americans also favor limits on abortion: there is overwhelming opposition to third trimester abortions, for example, and even majority opposition to abortions in the second trimester. Your magnificent scrivener is in harmony with the American majority here, as well. (As is Danish law.)

If Roe is overturned (as seems likely), what “Americans” support or oppose is beside the point, because the reversal of Roe would mean it’s no longer a national issue, but a state issue. (And it’s hypothetically possible that some states may allow the issue to be settled at the county or even local level.) The mid-terms won’t be a national referendum on abortion: if indeed abortion is still the dominant issue come November, it will be more like fifty individual state referenda on abortion.

What’s more, for reasons I’ve already alluded to, this is no slam-dunk for Democrats anyway: a sizeable majority of Americans support legal abortion, but nearly just as many oppose late-term abortions. Bill Clinton famously formulated what seems to be the closest thing to an accurate representation of American (and Danish) sentiment on abortion: that it should be “safe, legal, and rare.” Over the decades since Bill Clinton left the White House, however, Democrats have thrown “rare” to the wind and recent presidential candidates (including Ole Puddinhead) have refused to countenance any restrictions at all on abortion. Here, as elsewhere, the Democratic base has moved well outside of the American mainstream.

Demanding universal access to unrestricted abortion is not going to be a winner for Democrats, but to call for anything less would risk alienating the abortion-enthusiastic voters that everyone seems to be supposing will be so juiced by the reversal of Roe that they’ll spearhead a rush to the polls to vote for anyone promising Unlimited Abortion for Everyone Always, Forever!

Does anyone believe there won’t be any more Worst Things Ever between now and November?

If the answer to both questions is after birth, then there’s no reason for any restriction on abortions, ever.

If the answer to both questions is, say, after X weeks of gestation, then we have a clear red legal line: all abortions must be legal before week X, and none can be permitted after that—the termination of a human life is murder.

If the answers differ, or remain ambiguous, we’re going to be having these fights until the end of time, and the laws will ebb and flow along with changing science, philosophy, morals, and ethics.

But none of that matters because the GLOB doesn’t care about abortion as a moral, ethical, medical, or legal issue. Reading between the lines of all the establishment (GLOB) media coverage in Denmark and America, it’s clear that their only concern with abortion is political.

The current president of the EU Parliament, Roberta Metsola, is an anti-abortion activist from the only EU country (Malta) where abortions are entirely outlawed.

Clearly the EU itself has not guaranteed abortion as a “right,” or Malta could not be a member. And the EU parliament is willing to abide a president who is categorically opposed to abortion personally.

So here’s another glass-half-full way for Danes to look at the probable reversal of Roe: it will make America a little more like the European Union.