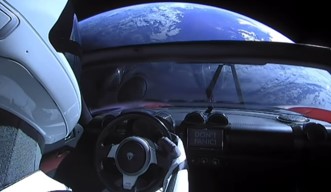 But Elon Musk certainly is. Flamboyant, eccentric, iconoclastic, mischievous, and a master showman, he’d be interesting even if he weren’t so wealthy.

Berlingske ran a pretty good profile piece on him Sunday:

A storm of unprecedented strength is heading for Boca Chica Beach: “The attacks on me must be seen through a political lens”
Peter Burhøi, Berlingske.dk, May 22

Elon Musk is the first of the western “oligarchs” to use his Fuck You Money as actual Fuck You Money. The harder his assorted competitors, detractors, and enemies come at him, the harder he hits back.

That sounds messy, so let me lean on John Stuart Mill to clean it up. Back in 1859, Mill concluded his treatise On Liberty with the following paragraph:

A government cannot have too much of the kind of activity which does not impede, but aids and stimulates, individual exertion and development. The mischief begins when, instead of calling forth the activity and powers of individuals and bodies, it substitutes its own activity for theirs; when, instead of informing, advising, and, upon occasion, denouncing, it makes them work in fetters, or bids them stand aside and does their work instead of them. The worth of a State, in the long run, is the worth of the individuals composing it; and a State which postpones the interests of their mental expansion and elevation, to a little more of administrative skill, or of that semblance to it which practice gives, in the details of a business; a State which dwarfs its men, in order that they may be more docile instruments in its hands even for beneficial purposes—will find that with small men no great thing can really be accomplished; and that the perfection of machinery to which it has sacrificed everything, will in the end avail it nothing, for want of the vital power which, in order that the machine might work more smoothly, it has preferred to banish.

Musk is precisely the sort of man that Mill’s “worthy” state exists to produce as often as it can—because they’re the individuals that keep society moving.

He’s therefore also the enemy of Mill’s “unworthy” state—and the enemy of all who seek to establish, maintain, or expand such a state. They only want the machine to work more smoothly (under their own expert operation) and cranky individualists like Musk tend to muck up the works.

That’s the whole story right there.

Like I said, the Berlingske piece is pretty good, but I wish Burhøi had clarified something that goes unstated through his article even though it’s very clearly insinuated: the “storm of unprecedented strength” headed for Musk right now isn’t political in the usual sense. It may look like the left ganging up on him because he’s had the effrontery to reject “wokeness,” but I don’t think that’s what it is. I think it’s pure resentment.

He’s John Galt, and they’re a mob of Wesley Mouches.

If you haven’t read Atlas Shrugged: He’s a guy with ideas and the will and the means to pursue them—and enough Fuck You Money to make it all happen. The Mouches are a bunch of envious and resentful grifters and moochers, living off the public teat without ever having innovated a damn thing in their bottom-dwelling bureaucratic lives.

The article cites a tweet from the insufferable AOC: “Tired of having to collectively stress about what explosion of hate crimes is happening bc some billionaire with an ego problem unilaterally controls a massive communication platform and skews it because Tucker Carlson or Peter Thiel took him to dinner and made him feel special.”

Does it not drip with resentment and envy? She has the balls to call Elon Musk “some billionaire with an ego problem”—her own accomplishments being precisely what? “Employee of the month” at whatever bar she worked at before getting herself elected to Congress? How many jobs has she created? How many things has she built?

How many fucking cars has she put into orbit?

Quick aside: putting a red convertible into solar orbit with Bowie’s “Space Oddity” blaring from its speakers (at least when the car isn’t in a vacuum) and “Don’t Panic” emblazoned on its dashboard is probably the coolest thing any human being has done in my lifetime:

The article also cites a tweet from the Gollum of the new left, Robert Reich: “When billionaires like Elon Musk justify their motives by using ‘freedom [of speech],’ beware. What they actually seek is freedom from accountability.”

Does that make any sense? In any context?

Let’s pretend Elon Musk is evil incarnate, hellbent on conquering the world and subjugating it to his own demonic and capricious will. And let’s say, as Reich does, that at this point in his plans Musk is laser focused on avoiding “accountability.”

Accountability from whom? And for what?

Anyone with any sense knows how to avoid the scrutiny of the GLOB in this year of our lord 2022: you tithe your way out with carbon credits and recitations of leftist catechisms. You fly a pride flag, embrace BLM, talk publicly about the terrible bigotry experienced by pregnant men, hug an illegal immigrant. Use the word “sustainable” in every other sentence. That’s all it takes. If you were truly evil, wouldn’t that be easier than doing something you knew would instantly antagonize the legion of spiteful little minions of the GLOB?

Besides, if we take Reich at his word then should we not also look skeptically on the “philanthropy” of billionaires—sorry, oligarchs—like Bezos, Gates, Soros, Zuckerberg, and company? By Reich’s logic, aren’t they also seeking to avoid “accountability” by means of their own pet causes?

As I see it, that’s the whole political story of Elon Musk right there: a dynamic and iconoclastic shit-disturber is the wished-for product of a liberal society—and the absolute nemesis of an illiberal one.