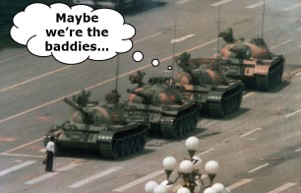 In yet another sign of the west’s alarming cluelessness, British and American “intelligence” held a joint press conference last week to announce something any half-witted dullard could have told you years ago: China, it turns out, represents the “biggest long-term threat to our economic and national security.”

Or, as a random Hong Kong protester with no known connections to western intelligence observed back in 2019, “Don’t trust China. China is asshole.”

The real news here is that the U.S. and British intelligence services seem to think this is news.

While the world these days is alert to Putin’s every move after the invasion of Ukraine, the heads of two of the West’s largest intelligence services are hoisting a red warning flag.

It points in a completely different direction than Moscow.

For the first time, the US FBI and British MI5 are teaming up on a joint warning against a threat to the West that in their view is far greater and far-reaching than the Russian one.

“The most groundbreaking challenge we face comes from China’s Communist Party,” said Ken McCallum, head of Britain’s National Intelligence Service MI5, in a speech to business leaders in London at Thames House, headquarters of MI5 a few days ago.

Let us all bow our heads in a moment of meditative gratitude for the American and British intelligence services, without whose diligence we probably would have admitted China into NATO or the EU, or handed Xi Jinping the Nobel Peace Price for having brought peace to the Uighur people.

Here he stood shoulder to shoulder with his American colleague, FBI Chief Christopher Wray, who also chipped in.

“China has for far too long considered themselves to be everyone’s second highest priority. They are no longer flying under the radar, “he told the BBC.

China was only flying under the radar because the western powers were so corrupted by access to all the money spilling out of the massive Chinese market that they willingly and willfully looked away for decades.  Disney and the NBA, for example, knew damn well what was going on with the Uighurs, but ohmygod you guys there is so much money over there! So they struck a valiant Social Justice pose in the west while ignoring the genocide being perpetrated by their Chinese sugar daddies.

Denmark has been just as complicit: Danish police actually forcibly removed Tibetan flags from Danish protestors during a Chinese state visit to Copenhagen as far back as 2002, to prevent causing offense to the representatives of a communist dictatorship. (Which is especially ironic considering the numerous protests staged openly against George W. Bush during his 2005 visit to Copenhagen.)

Western corporations made a great show of pulling out of Russia following their invasion of Ukraine earlier this year. Who has pulled out of China?

China didn’t fly under the radar so much as (directly or indirectly) bribe the guys watching the radar to look away.

If China conquers the democratic island state of Taiwan by military force, it will be “one of the worst business disruptions the world has ever seen,” the FBI chief warned.

That’s been true for decades.

And if China takes Taiwan by force, it will lead either to one of the bloodiest wars in human history (if we honor our pledge to defend Taiwan)—or to the one of the most shameful chapters in the history of western civilization (if we look the other way).

But it’s the business disruptions we should worry about.

The joint actions of the heads of the two intelligence services are unprecedented. It merely underscores the seriousness of the threat at a time when there is otherwise much focus on the conflict between Russia and Ukraine.

It also underscores the seriousness of just how badly the western establishment has been at looking out for our interests and security.

When Christopher Wray followed up in an interview with the Financial Times , he stressed the seriousness:

“We want to make sure that the China threat, which in many ways is the biggest, most far-reaching and comprehensive long-term threat that we and our allies face, remains at the top of the agenda,” he told the British newspaper.

I assume he means “at the top of the agenda after white supremacy and Utra MAGA,” which Ole Puddinhead himself has repeatedly identified as the real top threats facing America.

According to the BBC, Ken McCallum tells how in just three years MI5 has doubled its activities related to the activities of the Chinese Communist Party and plans to double the number again.

‘It may seem abstract. But it’s real, and it’s urgent. We’ll have to talk about it. We have to act,” he said.

That’s a damning admission.  China hasn’t changed: I’m old enough to remember watching Tiananmen Square crushed beneath the heel of the CCP’s boot, and my parents were alive during the “Great Leap Forward” of 1958-1962, with its estimated death toll of 45 million. The fact that MI5 has had to keep upping its activities relating to China tells us just how badly they’d been neglecting them in the past.

You had one job, MI5. Well, you had and have a bunch a jobs, but keeping tabs on a genocidal and increasingly militant nuclear-armed communist dictatorship was probably close to the top of the list.

And you didn’t even have white rage and Donald Trump to distract you.

The threat concerns both Chinese espionage, theft of Western technologies and campaigns of influence in political life.

Ken McCallum gave an example of how a British aviation expert had received an attractive job offer from China. Along the way, he was asked to provide technical information about British military aircraft, and the Chinese company turned out to be in fact a facade of the country’s intelligence service.

He gave another example from January, when Christine Lee, a woman with ties to the Chinese Communist Party, had tried to influence British parliamentarians with financial donations until MI5 thwarted the plans.

According to The Economist, Christopher Wray warned the assembly about how China’s spy service and the People’s Liberation Army were out to “plunder” Western companies for their knowledge. Many Chinese companies were, in fact, facades of the Communist Party, he said, and the country was behind more hacker attacks than all the world’s great powers combined.

No mention of U.S. Congressman Eric Swalwell, a highly visible (and notoriously flatulent) member of the House Intelligence Committee, who carried on an affair with a Chinese spy…  and paid no consequence for it.

(“Yeah, I bagged a Chinese hottie and turned out she was a communist spy… LOL, whatcha gonna do?”)

No mention of U.S. Senator Diane Feinstein, who was driven for twenty years by a chauffeur who was in fact a Chinese spy….  and paid no consequences.

(“Come on, you guys, I obviously wouldn’t have employed him if I knew he was a spy!”)

No mention, even, of the very recent revelation that 950,000 barrels of oil from America’s strategic reserves, which Ole Puddinhead released to “ease the pain that families are feeling” from high gas prices, were sold to a Chinese-owned gas company—that appears to be partly owned by Hunter Biden’s investment company.

(“I never said which families’ pain it would ease… c’mon, man, charity begins at home! It’s a saying. And the Chinese have families, too!”)

Those are also good examples that MI5 and the FBI might have mentioned.

More than a little odd they didn’t.

And more than a little troubling that journalists can’t be troubled to fill in the blanks that these hapless losers refuse to.

China is a genocidal communist dictatorship state with a massive economy, a nuclear arsenal, and tentacles reaching into every aspect of western life: our politics, our industry, our business, our entertainment.

If our intelligence services are only waking up to that now, we’re in deep trouble.

(Narrator voice: “They were in deep trouble.“)