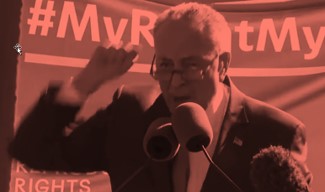 I’ve written a lot about taxpayer-funded DR’s ace US correspondent Steffen Kretz over the past couple of years—about his writing, I should say. About his coverage of America.

I have nothing against him as a person. His personhood is to me a matter of absolute indifference, as interesting and relevant as tomorrow’s weather report for Auckland, or the price of a Big Mac in Nicaragua. For all I know, Steffen Kretz is a great guy, down to earth and fun to be around, just a regular Joe doing his best to make a living and enjoy his life. Or maybe he’s a total jerk, a psychopath. It doesn’t matter. I don’t care.

It’s his writing about America that makes my blood boil.

So when I call him “the execrable Kretz,” or any other slur that comes to mind, it’s nothing against the man himself, but against the disgusting disservice he does to the people of Denmark with his grotesquely partisan coverage of the United States.

I understand why Nancy Pelosi and Chuck Schumer do and say partisan things: it’s their job, and they clearly think it serves their interests to dial it up to eleven. It’s not nice, or productive, or “unifying,” but it’s understandable. It makes a certain amount of sense.

I understand why Ole Puddinhead says and does partisan things, even though as president it is emphatically not his job, and even though he campaigned explicitly (and dishonestly) against divisiveness.

As the American correspondent for Denmark’s taxpayer-funded news company, his job is to help Danes understand the United States—not to convert all Danes into left-wing Democrat extremists with an endless deluge of hysterical and overwrought propaganda, most of it passed along unfiltered from partisan extremists in America.

As I’ve written many, many times in the past: there’s nothing wrong with informing us what the American left is saying and doing. Nothing wrong in letting us know how Democrats see the world. But Democrats only represent about half the country, and the far left probably only represents an absolute maximum of about one fifth. To present their perspective on every issue as though it were the truth about America and Americans would be like presenting only Vladimir Putin’s perspective on the war in Ukraine. Or Volodymyr Zelensky’s. You only get one side, incomplete in many areas and deliberately misleading in many others.

ANALYSIS: Trump tweet got extremist groups to prepare for the storming of Congress
Militant groups and extremists interpreted the president’s tweets as a call to violence, says Congressional committee.
The Execrable Kretz, DR.dk, July 13

There’s nothing in the whole long article that can qualify as “analysis.”

Not a single premise is questioned. Nothing is held up and examined independently. It’s hard to say whether Kretz even wrote the piece or simply took dictation from Nancy Pelosi.

The premise is that the tweet pictured below was an incitement to violence:

Focus on the last two lines: “Big protest in D.C. on January 6th. Be there, be wild!”

Is that a call to violence?

Before you answer, here’s another statement to consider:

That’s Senate Majority Chuck Schumer, addressing a crowd of protesters on the steps of the Supreme Court back in 2020.

If your premise is that a public call to attend a protest and “be wild” is tantamount to inciting a violent insurrection, doesn’t it stand to reason that Chuck Schumer incited the assassination of a Supreme Court justice? Do you consider “you will pay the price” and “you won’t know what hit you” less provocative than “be there, be wild?”

And we know that because they still haven’t even informed their readers that Nicholas Roske attempted to assassinate Supreme Court justice Brett Kavanaugh on June 8.

You even understate the case. If you look carefully, the last line of Trump’s tweet was “Be there, will be wild!” not “Be there, be wild!”

He was not even asking his followers to be wild. He was saying in effect “be there, its gonna be lit” which no doubt partisan Democrats will take as evidence that Trump knew everything that was going to take place, rather than the usual sales pitch “big party at my place tonite, Its gonna totally rock!”

I’ve been understating a lot of cases for far too long, and that’s a big part of where tonight’s post comes from.