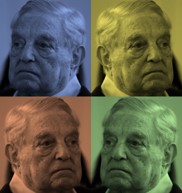 My headline is my contention: the wild and hysterical extremism of the global left is the most destructive political force in the west.

Let’s start with some definitions, in accordance with my old-fashioned notion that communication and understanding work best when people are talking about the same things.

By “the global left” I mean the Globalists, Leftists, Oligarchs, and Billionaires as previously defined in a post dedicated to that purpose: the GLOB.

By “destructive” I mean damaging to western economies, institutions, politics, and social and cultural equilibrium (among other things). And I’m not talking about fringe damage, but actual destruction and ruination.

By “political force” I mean a shared ideological framework: what Thomas Sowell would surely call a vision. A broadly unified movement of people advocating for and acting on a shared socio-political outlook, individually and collectively, in every sphere of human activity.

By “wild and hysterical extremism” I mean the advancement of ideas and policies that represent a significant departure from the norms of at least the last half century, with apocalyptic rhetoric better suited to the Book of Revelations than public policy debates. “We can reduce pollution through the use of solar and wind energy” is neither extreme, nor wild, nor hysterical. “We must end the use of fossil fuels right now to prevent the end of the world” is all three.

Now that I’ve clarified the meaning of my contention, it would be fair for readers to ask what prompted it. After all, this statement of belief is no truer today than it was yesterday or the day before, and it’s unlikely to change tomorrow or the day after. So why make it now?

It’s obviously a syndicated piece, but there it is in Berlingske. Rather than translating the piece myself, I’ll use the English language version found here:

Without getting into his arguments, let’s sample some of his language:

This isn’t just wild and hysterical: it’s delirious. And with respect to the idea that the Supreme Court’s recent decision on Dobbs was—please read Soros’s words slowly, carefully, and attentively—”part of a carefully laid plan to turn the US into a repressive regime“… well, if that’s not a conspiracy theory, what is?

The thrust of his argument isn’t subtle: American democracy is under attack by Republicans, who want to throw it out and replace it with a repressive regime; they therefore represent a greater threat to the country than Russia or China do.

What are his arguments to support that insane premise?

The Supreme Court overthrew Roe v. Wade as bad law and kicked the issue of abortion back to the states to decide. It also threw out as unconstitutional a New York gun law that prohibited carrying concealed firearms (Constitution says: “the right of the people to keep and bear Arms, shall not be infringed”).

There is only one way to rein in the Supreme Court: Throw the Republican Party out of office in a landslide election… But when it comes to organizing a landslide victory against the radicalized Republicans, opponents face almost insurmountable obstacles. Republicans have not only filled the Supreme Court, and many of the lower courts with extremist judges. In states like Florida, Georgia and Texas, they have passed a number of laws that make it very difficult to vote.

“Very difficult,” according to George Soros, apparently means requiring proof of identification to vote. According to one study that looked at 47 European countries, all but one of them require positive photo ID to vote. (I went into the whole phony issue of Republican voter suppression in depth here and here.)

Additionally, Democrats control the presidency, the Senate, and the House of Representatives, but Soros is saying that Republicans have to be completely purged to save American democracy. Because one-party rule always improves democracy.

Soros also keeps throwing the word “extremist” around without defining it. What do you think he means? I’ve given you my definition; do you think we could coax one out of him? For every Republican policy proposal Soros can can name that deviates from the mainstream of conservative thought over the past fifty years, I could probably name half a dozen progressive policies that are outside the mainstream of any branch of American political thought over the past hundred years.

Soros insists that the issues he raises aren’t partisan in nature. He says it very clearly: “I am a supporter of the Democratic Party, but this is not a partisan issue.” In other words, the things he’s adovcating aren’t political: they’re universal goods. Anyone who disagrees with him is therefore necessarily bad. It’s not about Republicans versus Democrats, but the struggle between good and evil. Soros is on the side of the angels, and Republicans… well.

I try not to demonize people who disagree with me. Look how far I bent over backwards yesterday, for example, to draw a distinction between my contempt for the writing of Steffen Kretz from my feelings for the man himself. I may sometimes forget myself and call him or Mikkel Danielsen a partisan hack or lickspittle, but I’m confident I’ve never accused them, or any other leftist, of deliberately seeking to overthrow democracy in America (or anywhere else) to install an authoritarian regime.

(I wonder whether I haven’t been too charitable. I mean, if people like the billionaire George Soros and the president of the United States and the Speaker of the House genuinely believe that democracy is in peril because their political adversaries disagree with them, as each of them has said publicly, isn’t it about time I myself wise up?)

It’s especially galling to hear George Soros complain about Republicans filling the courts with judges they like. According to one guy who follows this stuff:

George Soros has quietly orchestrated the dark money political equivalent of ‘shock and awe,’ on local attorney races through the country, shattering records, flipping races and essentially making a mockery of our entire campaign finance system.

Between 2015 and 2019, Soros and his affiliated political action committees spent more than $17 million on local DA races in support of left-wing candidates, according to the Capital Research Center, a non-profit that tracks lobbying and charitable giving. That number is expected to top $20 million in the last two years, according to estimates from the NLPC.

In other words, Soros has been working to get his preferred brand of District Attorneys into office across the country.

But they’re not extremists, remember, so that’s okay.

They’re just District Attorneys who see it as their mission to end “mass incarceration,” and whose unwillingness to prosecute violent criminals has therefore contributed to the massive increase in violent crime in their districts. (The Post article breaks all that down by the numbers.)

And I therefore believe that the actions of George Soros represent a destructive political force.

Which makes me an extremist, by Sorosian logic, and the supporter of a party that needs to be purged to make America safe for a two-party system of government. That absurdity is a point Soros himself makes explicitly. It’s his last line, his conclusion: purging Republicans from elective office, he declares, “is about reestablishing a functioning two-party political system which is at the core of American democracy.”

Yes, and we’ll never achieve parity between dogs and cats until we get rid of all the cats.

There’s no logic to that, obviously. America already has a two-party political system. But one of the parties sees the world differently than George Soros does and must therefore be purged so the nation can have a good two-party system… entirely dominated by one party.

Tucker Carlson recently offered up a monologue addressing the destructive impact of global leftism. He’s approaching the issue from the “Green New Deal” angle, but the larger point goes directly to what I’ve been arguing: the wild and hysterical extremism of the left is destroying things.

If you don’t have time to watch it, or don’t feel like it, or just aren’t in the mood for Carlson’s weird hyena stage laugh (just skip from 5:55 to 6:00 to avoid his worst one), the gist of the segment is that Ghana, Sri Lanka, the Netherlands, France, Italy, Albania, Kenya, Argentina, Peru and a variety of other countries around the world are experiencing energy and economic disruptions big enough to produce civil unrest ranging from angry protests to riots to actual insurrection (the Sri Lankan government has been overthrown)… because GLOB policies are destroying or have already destroyed their lives.

It’s a point I’ve been harping on for at least a couple of weeks now: the world is in crisis—in several crises—and if we trace the most serious crises back to their causes, in almost every case we eventually find our way to leftist, globalist ideology.

We find our way back to experts and intellectuals who know exactly what needs to be done to “save the world” and therefore insist upon absolute compliance with their demands.

I’m not accusing globalist leftists of deliberately seeking to bring about as much conflict, famine, poverty, and pestilence as they can, but when the policies you promote produce those results everywhere they’re tried, then maybe the problem isn’t in the world but in your policies.

Let’s take George Soros’s argument at face value and in good faith. (He doesn’t deserve as much, but cut me some slack: it’s a thought experiment.)

American Republicans are a threat to democracy because they make it harder to vote, they’re letting states decide abortion law for themselves, and they’ve ruled that a New York law placing draconian infringements on the right to bear arms violated the Constitutional guarantee of the right to bear arms. On top of all that, they’re doubling down on the effort to appoint judges at every level who think along those lines. Those are the pillars supporting his contention that the American system must be wiped clean of Republicans.

Got it? That’s what makes Republicans “domestic enemies of democracy.” That’s the logic, the argumentation.

How then should we characterize a party that seeks first of all to impose upon America policies that have brought every country in which they’ve been tried into poverty and deprivation, and secondly to purge Congress of any opposition?

How do we characterize a global ideology or vision that demands entire countries destroy their food production and energy infrastructures to satisfy the whims of billionaires and their lapdog “experts?”

How do we characterize a political party that considers anyone opposed to their policies a domestic enemy?

I’ll tell you: we characterize it as the most destructive political force in the western world.

So go ahead: change my mind.