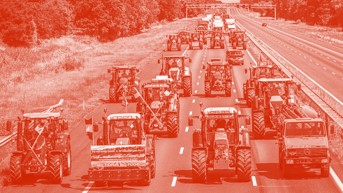 If there’s a single over-arching theme to the political thinking of western elites—you know, the GLOB—since the early 1990s, it’s wrongness.

Try and think of a single major issue that our political and cultural establishment has gotten right since the Soviet Union collapsed. Something you can look back on and say, “Well, we can all be grateful our leaders did that!” instead of “Good lord, what were they thinking?”

It’s been one own-goal after another. We’ve shot ourselves in the foot so often it’s a wonder we can still walk. Russia, Iraq, Afghanistan, Libya, China, immigration, the economy, energy, the pandemic… what’s your favorite success story? And that’s just the big picture stuff.

It was an article in Berlingske that got me thinking along those lines this morning.

The majority now prefers a strong leader: “There is a growing recognition that democracy is not a perfect form of government”
Carolina Kamil, Berlingske.dk, July 11

Kamil opens the article in an interesting way:

In Europe, we often tell ourselves that everyone wants to live like us.

That given a choice, people around the world would naturally want a democratic form of government.

That’s not what everyone wants.

That’s a direct rebuke of the western approach after 9/11, exemplified by this November 2003 speech by George W. Bush:

Sixty years of Western nations excusing and accommodating the lack of freedom in the Middle East did nothing to make us safe, because in the long run stability cannot be purchased at the expense of liberty. As long as the Middle East remains a place where freedom does not flourish, it will remain a place of stagnation, resentment and violence ready for export. And with the spread of weapons that can bring catastrophic harm to our country and to our friends, it would be reckless to accept the status quo.

Therefore the United States has adopted a new policy, a forward strategy of freedom in the Middle East. This strategy requires the same persistence and energy and idealism we have shown before, and it will yield the same results. As in Europe, as in Asia, as in every region of the world, the advance of freedom leads to peace.

Nineteen years, thousands of western lives, and trillions of western dollars later, and “the Middle East (still) remains a place where freedom does not flourish.”

Yes and no. Then and now I believe he was correct in his stated ideals, but he was catastrophically wrong with respect to their viability.

Lot of that going around.

You’d have to be a cynical and pessimistic person, and a dismal student of history, to think that all people—everywhere and always—don’t want to be free.

You’d also have to be a little daft not to understand that people have basic needs that supercede political liberty. It’s not that complicated: food, water, health, and security will always count for more than liberty. Only when our basic needs are being met do we have the luxury of reflecting on our political condition.

(That’s the obverse of our problem in the west: having long ago succeeded in establishing social and political arrangements that secured our basic wants, we have such a surfeit of luxury that we’re able to amuse ourselves wondering what a woman is and whether men can get pregnant.)

While Russia’s war in Ukraine is propelling Europe’s greatest revitalization of the joint democratic project in decades, support for the same is crumbling in one of the regions we recently had high hopes for: the Middle East.

Only ten years ago, millions of Arabs took to the streets to protest against their corrupt leaders.

They wanted economic reform, dignity and democracy—and the West cheered from the sidelines.

But the project went awry and in the vast majority of countries the people ended up with even more dictatorial and oppressive leaders than they already had.

Today, hope is extinguished and the economic crisis is so massive that a majority of Arabs no longer believe that democracy can create economic prosperity.

They just want a strong and effective leader who can get them out of the financial swamp.

Once again: yes and no.

Kamil’s article is based on an Arab Barometer survey. Her main takeaway echoes that of the organization’s director, who says:

What we see across the region is that people are hungry, people need bread, people are frustrated with the systems they have. There is a growing recognition that democracy is not a perfect form of government, that it cannot fix everything.

These things are not necessarily connected. It is true that democracy “cannot fix everything,” and it is true that when people “need bread” they’re going to be less concerned with political liberty than they are with getting themselves and their loved ones fed.

But that is neither an argument against democracy nor an argument in favor of strong-man rule. It’s just a pair of tautological observations: democracy ain’t perfect and hungry people want food.

In eight of the countries surveyed—all except Morocco—a majority of respondents agreed with the statement that the country needs a leader who can “bend the rules” to get things done.

The most popular leader in the region is Turkish President Recep Tayyip Erdogan. Not many have faith in US President Joe Biden.

Asked about their views on China and the United States, respectively, there are more who have a positive view of Beijing than of Washington.

One quick note: in seven of the nine countries surveyed (all but Libya and Morocco), a majority of respondents agreed with the statement “Democracy is always preferable to any other form of government.” The support is hardly overwhelming, but it’s there:

It’s not clear to me where Kamil got the data to support the notion that respondents admire Erdogan, don’t trust Biden, and prefer the Chinese to the American model of government. There’s nothing about any of that in the survey results. I’m unsurprised that Muslims would find one of Islam’s leading semi-western champions appealing, or that anyone would distrust Ole Puddinhead, but the preference of ruthless Chinese autocracy over admittedly messy American democracy doesn’t fit well with the democratic inclinations expressed by the survey.

But the survey itself seems to struggle with what’s going on in America and across the west:

Looking outside the region, democracy has also been in crisis. Populist leaders have risen up in a number of democracies, often undermining democratic institutions. The U.S. Capitol riot struck at the heart of one of the world’s longest standing and most powerful democracies, suggesting democracies may not be able to maintain order. In short, both in the region and around the world, democracy appears to be losing some of its luster.

The “U.S. Capitol riot” did not “strike at the heart” of American democracy: that’s a left-wing talking point. And it’s a strange perspective that sees the rise of “populist” leaders as undermining democratic institutions. Which institutions? Undermined how? Where? Consulting my own notes, I can see the American left is indeed seeking to undermine the Supreme Court (unelected tyrants!), the Senate (unfairly allocated!), the Electoral College (squee!), and indeed any institution or Constitutional safeguard getting in the way of unfettered leftist control. I don’t think, however, that those are the “underminings” that Arab Barometer has in mind.

But never mind all that. As the survey concludes: “…it is clear that citizens across MENA (the Middle East and North Africa) still harbor democratic aspirations. In their view, democracy may not be perfect, but on the whole it still remains the preferable system given the existing alternatives.”

It suggests that the proper course of action for the west here as elsewhere is very simple: stay the hell out of the way.

Let’s go back to the opening of Kamil’s article:

In Europe, we often tell ourselves that everyone wants to live like us.

That given a choice, people around the world would naturally want a democratic form of government.

That’s not what everyone wants.

That’s her summation of a survey whose own conclusion states that democracy is “the preferable system” in the Arab world.

Which is just one more reason we should stay the hell away from these countries: if we can’t even understand what they want when they tell us clearly and directly, what business do we have sticking our noses in their business?

If they want democracy, let them build democracies. If they want paternalistic strongmen running the show, let ’em.

Let’s turn our eyes from the Arab world back to western civilization.

And let’s remember what we’ve been talking about: catastrophic western policies, which I’ve so far only touched on lightly, and the natural tendency of people to put their basic needs above political liberty.

The situation described by the Arab Barometer is one in which even people who recognize the primacy of democracy as a political model are willing to compromise on democracy in exchange for stability, peace, and prosperity.

Quick: look at the Netherlands. At Italy. At Poland. At Germany. At Sri Lanka.

The GLOB has decided that meeting targets designed to fight a very survivable climate change (see the collected works of Bjørn Lomborg) is more important than meeting the basic food requirements of their populations.

If you think a reduction in Dutch food production isn’t a big deal, an opinion piece in Newsweek says: think again.

…the effects will be global. The Netherlands is the world’s second largest agricultural exporter after the United States, making the country of barely 17 million inhabitants a food superpower. Given global food shortages and rising prices, the role of Dutch farmers in the global food chain has never been more important. But if you thought the Dutch government was going to take that into account and ensure that people can put food on the table, you would be wrong; when offered the choice between food security and acting against “climate change,” the Dutch government decided to pursue the latter.

And when people disagree, as they are inevitably going to do when they feel their basic needs are threatened (see the Arab world, above), that’s going to be dismissed as “populism.”

The GLOB: Stop farming so much or you’ll ruin the climate.

Farmers: If we start farming less there’ll be less food.

The GLOB: We’re okay with that.

The GLOB: You’ll get the food you need, stay out of this.

We’re already switching to green energy before it can meet our energy needs, and now we’re supposed to start taking food production offline to fight climate change. Because (mumble mumble mumble) reasons, and equity, and diversity, and shut up.

Fighting back against these stupid and frankly deadly policies doesn’t “underminine democracy,” but seeks to restore it from the clueless Fredos running roughshod all over it. The farmers in the Netherlands, the yellow vests in France, the angry mobs in Italy and Poland and elsewhere aren’t seeking to overthrow their democracies, but to overthrow the idiots responsible for the idiotic policies that are going to leave much of Europe cold, hungry, and poor in the very near future.