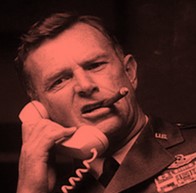 Every now and then, in contemplative moments, I question myself. I press myself to test whether I might after all be wrong about this or that, or everything. I do this consciously and deliberately. I imagine a zealous prosecutor with the opposite point of view from my own; he or she grills me (or my ace defender, when I employ one) ruthlessly before an impartial judge who tolerates no malarkey. It’s a self-corrective feature that’s served me very well over the years and has taught me some humility and forbearance.

No case is too small or too large for this little courtroom of my mind: it has heard everything from the most diminutive pangs of conscience to the weightiest and most consequential decisions.

In recent years, that courtroom has seen a lot of heated debates on the question of whether I’ve been over-reacting to current events. If not over-reacting, then over-interpreting. Taking things too seriously, too literally, too hard.

For example, back in March I wrote:

One could therefore argue that if anything the story has more context and relevance now than it did back in 2020—certainly not less. Back then it was a story about the corruption of a couple of men: today it’s a story about corruption so broad and so deep—and so readily apparent—that it strains credulity.

It’s hard to see myself talk like that. I’m not apocalyptic by nature, I’m not an hysteric. (Nervous glance at the prosecutor: is she going to object? No? Whew.) It’s disturbing to see myself writing things that come off as overheated.

But you can slice at the 2020 Hunter Biden laptop controversy with Occam’s Razor all day and you won’t find an explanation that accommodates all the known facts better than simple corruption does. I’m not talking about a grand conspiracy: just the hum-drum workaday corruption of many individuals each privately surrendering just a little of their integrity for a cause they believe in. A little corner-cutting here, a little looking-the-other-way there. And a whole lot of ends-justify-the-means all around.

They more or less said so themselves.

Lately I’ve had plenty to say about the ways in which the left—President Biden, Speaker Pelosi, Senate Majority Leader Schumer, the Democratic Party rank and file, the establishment media, academia, etc; in a word, the American GLOB—have been villifying conservatives. Demonizing them. Dehumanizing them.

And in calmer moments, I find it hard to believe some of the very things I’ve been writing. Am I misinterpreting things? Am I hearing things that aren’t actually being said? Am I making mountains out of molehills?

Then I see something like this—something that’s been seen far and wide across the conservative side of the web:

They’re all troubling. I’ll address them one at a time.

(1) Luce’s tweet isn’t hard to understand: he’s saying American Republicans are the most terrible political force in the world, full stop. If Hayden didn’t understand that, he needs to be relieved of whatever responsibilities he still holds, wherever he holds them, and be put to pasture: his brain no longer works.

(2) If Hayden did indeed understand Luce’s tweet and nevertheless agreed with it so emphatically he felt the need to publicly endorse it—reminding the world of his credentials for good measure—then Hayden is using his reputation to promote a very dangerous and divisive idea. To suggest that American Republicans are a more dangerous, nihilistic, and contemptible political force than, for example, the CCP, Vladimir Putin, Al Qaeda, the Taliban, North Korea’s Juche, or the Iranian theocracy, to name just a few unsavory political forces out there in the world today, your thinking needs serious recalibration.

And that’s just keeping within an American context. Luce was looking beyond America’s shores at the wider world, and he could see not a single political movement worse than that of American Republicans. Anywhere. Not in Afghanistan, Russia, China, North Korea, Iran, Syria, Saudi Arabia.

(3) The third option is the most troubling. If Hayden truly understands what Luce is saying and knows it’s wildly overheated nonsense but is endorsing it anyway, what does that mean?

Why would a former CIA and NSA director—and current CNN analyst—support such an incendiary statement when he knows it’s not true?

What purpose would it serve?

I can’t think of a single answer that isn’t deeply disturbing.

The least worst of them would be that it was purely partisan: a vicious political attack against a political party supported by roughly half the country—to try and boost the Democrats’ chances in the mid-term elections this November: “I am a former director of the CIA and I’m telling you that American Republicans are the most dangerous people in the world. Vote Democrat in November!”

I don’t even want to enumerate any of the other possibilities because they’re so much worse I feel kind of crazy even thinking them, but I’d encourage everyone to reflect upon what they might be and meditate upon the implications.

Or ignore them, and join me in taking the simplest and most charitable explanation: it was purely partisan.

Let’s also assume that the wild and incendiary statements about Republicans that have been made by Biden, Pelosi, and Schumer—the three most powerful people in the federal government—let’s also assume they don’t really mean it, either: that it’s just partisan smoke they’re blowing to energize their base.

“The progressive movement is the most dangerous ideology in American history.”

“Democrats have to be defeated or American democracy will die.”

“If the Supreme Court doesn’t support the second amendment, they will reap the whirlwind!”

“There is no ideology in the world more contemptible, nihilistic, or dangerous than that of today’s Democratic Party. Nothing even comes close.”

I repeat: what’s to stop anyone else from saying things like that?

Turnabout’s fair play and all that, right? They’d only be matching the Democrats’ rhetoric measure for measure—and with nothing to lose, since anyone not toeing this absurd Democrat line has already been branded as monstrous.

But really, what could be more dangerous or contemptible than someone of General Hayden’s credentials asserting that his political adversaries are very literally the worst people in the world?

(I mean besides someone of Joe Biden’s credentials, or Nancy Pelosi’s, or Chuck Schumer’s.)

With such rhetoric coming down from on high, how can any rebuttal of any kind be considered “overheated”? What is the proper level of “heat” when you’ve been declared worse than Al Qaeda or the Taliban or the CCP because you favor things like limited government, strong borders, lower taxes, equality before the law, and free speech?

Hayden: You Nazi-ass genocidal bastard, you white supremacist racist, you misogynistic homophobic neanderthal: you are the essence of evil and the greatest danger facing our nation!

Me: That’s crazy talk—and kid of dangerous. You shouldn’t say things like that.

Hayden: Objection! Objection! How dare you talk to me like that? I have been the director of the CIA! The director of the NSA! Isn’t it just like you, vile scum that you are, to throw out such insulting rhetoric? You think you’re so smart…. how many national intelligence agencies have you run, punk? How many stars are on your uniform? You know nothing, and now you’ve only proved that you’re precisely the kind of monster I was warning about!

The courtroom shudders as the gavel strikes the sounding block. Silence; all eyes turn to the judge. His steely eyes scan the courtroom before he pronounces his verdict.

Judge: In this matter of Greg versus Greg on the question of “Is Greg’s own rhetoric overheated?” we find for the defense. Case dismissed.

Hayden: You can’t dismiss me! Do you know who I am? Do you—

Exit, pursued by a bear.

(Yeah: my imaginary courtroom has bears.)

Bears are fine. Myself, I prefer knights in armor wielding rubber chickens

I don’t even know what skit that’s from… how did I get through childhood without encountering the knight in armor thwacking a British barrister (or whatever) with a rubber chicken?

If I recall correctly, it is from series 1 episode 3 – Court room scene with Cardinal Richelieu http://www.montypython.50webs.com/scripts/Series_1/17.htm

That is the same episode that has one of my favorite Python mini sketches, where John Cleese is doing a small cutscene following the bicycle repairman sketch, doing his newsman persona reading some boilerplate about how the bicycle repairmen is fighting international communism, only to be overcome by his visceral hatred of communists. The chicken knight makes another appearance there.
https://www.youtube.com/watch?v=PuZ24VBrbO4

Cleese’s physical humor here always cracks me up. Who among us have not felt the urge to express our displeasure the way he does here?

The growling at the clenched fist while the folding chair threatens to collapse around him is genius! (And no, I never saw the courtroom scene with Cardinal Richelieu, at least I have no memory of it. My life is now a little richer.)