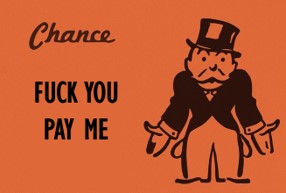 Language Note: Colorful language ahead. If you don’t care for that kind of thing, move along.

Joe Biden is shopping for votes again: this time he’s offering a $10,000 bribe.

President Biden is expected to announce a plan Wednesday to cancel thousands of dollars in federal student loan debt for borrowers who make less than $125,000 per year — despite one think tank warning it could cost the average taxpayer more than $2,000.

CNN, citing multiple sources familiar with the discussions, first reported late Monday that the president would announce the write-off of up to $10,000 per borrower after he returns to Washington from his Delaware beach house.

The Associated Press reported Tuesday evening that Biden will also announce an extension of the current loan payment moratorium until January, after the midterm elections.

Let’s not talk about education or economics. Let’s not distract ourselves getting tangled up in budget projections, inflation, or the return on investment for a college education. Let’s not even talk about the eponymous Bartleby just yet.

Let’s just talk about what it means to “cancel” a debt.

If I lend you ten bucks, that’s a loan. I’m out the money, but only temporarily: I know I’ll get it back eventually. You’ve suddenly got ten bucks in your pocket, but you’ve also taken on ten bucks in debt that you’ll have to pay me eventually. That’s how it works.

What would it mean to “cancel” your debt?

It would mean you got ten bucks for free and I just lost ten bucks.

That little hole in my finances—where do I go to get that canceled?

Nowhere. Because it’s not “canceled.” It’s just moved. If I want to “fill that hole,” I’ll have to find another way to get that ten bucks.

Look at these beggars:

They presumably applied to and were accepted by colleges or universities, borrowed money to pay for tuition, and made it far enough through to learn how to walk upright and carry signs—if not quite far enough to learn basic economics. Now (again, presumably) they have to pay back the money they borrowed for that education.

The appropriate answer to such grasping selfishiness is the same answer the gangster Paulie gave his “clients” in Goodfellas:

Your student debt loan payments are too big?

You didn’t realize how big your payments would be?

You don’t think your education was worth the money you paid for it?

Fuck you, pay me. —And I’ll have a croissant and a large black coffee, thanks.

They’re begging the president to do their dirty work. It’s what their signs say:

“But Paulie, how about you just forget about me and shake down other people for the money?”

I wrote at length about all this back in February of 2021, when it looked like Biden was stupid enough to do something like this just a month after taking office. He wasn’t, probably because this required a level of stupid that needed building up to.

If Republicans can’t explain that to the American people—that we’re all being asked to take on more debt to help the people who don’t want to pay their own debts because the Democratic party needs more votes and feels perfectly comfortable using our money to pay for them—then we need new Republicans.

What’s especially galling is the messages that are being sent by this stupidity. That was my focus back in 2021, so I’ll just copy them out of that post and plop them down here:

You’re telling all borrowers that contractual debt isn’t really a serious thing, because if it’s too hard paying it back you can always get it canceled. No biggie, someone else will pick up the tab. Debt is unfair!

You’re telling every American who tightened their belts to pay off their own student loans that they were chumps and suckers and rubes.

You’re telling every young American who didn’t go to college because they couldn’t afford it and didn’t want to saddle themselves with a massive student loan that they were fools for thinking responsibly.

You’re telling taxpayers that they’re going to have to suck it up and pay for the lousy financial planning of their fellow Americans.

And of course, thanks to messages like Pressley’s, you’re sending a message to everyone that it’s racist to expect people to live up to their contractual obligations.

(The “Pressley message” being alluded to was the Representative’s statement that “the student debt crisis has always been a racial and economic justice issue, but for too long, the narrative has excluded Black and Latinx communities, and the ways in which this debt has exacerbated deeply entrenched racial and economic inequities in our nation.”)

Democrats don’t care about the kinds of behaviors their idiot policies encourage or discourage: they still haven’t figured out that granting blanket amnesty to illegal aliens invites more illegal immigration and sends a gigantic fuck you to every law-abiding immigrant who ever busted their butt to make themselves American legally. And Republicans have never been good about holding Democrats’ feet to the fire on that kind of thing anyway.

Don’t want to struggle with debt?

Can’t attend college or university unless you borrow a ton of money?

Don’t think you can get a decent job without a degree?

Think again: according to a May 2022 Computerworld article (“No Degree, No Problem“): “59% of employers are considering eliminating college degree requirements — changes that could reshape the IT workforce.”

Don’t want to work in tech?

There are other industries with no educational requirements. Obviously.

Did you somehow get yourself in over your head with debt to finance a college education only to find that your career turned out not to pay enough to justify that massive investment?

Wow, then just imagine if a whole country got itself in over its head with debt to finance idiocies only to find out they didn’t justify the magnitude of the investment? Imagine!

Also…. Fuck you, pay your bills.

* Herman Melville’s Bartleby the Scrivener is a tale told by an oldish Wall Street lawyer who employs “scriveners” to hand write legal documents for his firm. He comes to hire a young man named Bartleby who turns out to be a fantastic addition to his (troubled) little staff of scriveners, but only for a while. Eventually there comes a day upon which the narrator asks Bartleby to transcribe something or other and the gloomy young man replies, “I would prefer not to.”

The narrator is stymied. The other scriveners are stymied. Whenever anyone asks Bartleby to do anything at the office, he offers the same answer “I would prefer not to.” He just stands there, staring out the windows at the brick walls beyond. He cannot be compelled to do anything. . .