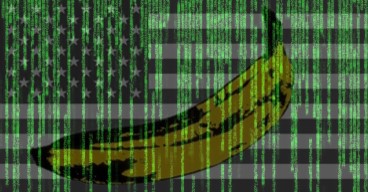 Back on August 9th I wrote about the raid on Mar-A-Lago. The words “banana republic” don’t appear in the post, but I did make a cute banana republic flag for the featured image:

When you have armed federal investigators swarm the private home of an ex-president who happens to be one of your loudest and most consistent critics—and the leading contender to be your next election opponent—I do catch a whiff of banana republicanism. Cheap, showy, thuggish. Sleazy.

Has my sense of smell betrayed me?

Based on his opinion column in Politico yesterday, John Tures certainly thinks so.

It’s entitled “The USA Isn’t a ‘Banana Republic’ for Investigating Trump — Just Look at the Data.”

There are some questionable phrasings in that headline, but let’s ignore them and focus instead on Tures’s actual premise: that what happened in Mar-A-Lago last week doesn’t ack-shually qualify America as a banana republic.

His entire argument is set out very neatly in the lede: “Plenty of healthy democracies have held their leaders accountable under the law.”

That’s just as questionably formulated as the headline (plenty of unhealthy governments have harassed their political opponents with trumped-up nonsense), but let’s ignore that, too. Let’s rise to the challenge and “look at the data” to see what it says.

Tures conducted “a review of 243 cases from 1972 through 2021, where current or former chief executives have been arrested, indicted or imprisoned. These include presidents, premiers and prime ministers, as well as even emperors and monarchs.”

Tures and his minions used data from Freedom House “to see if the country was considered free, partly free, or not free at the time of the arrest, indictment and imprisonment.”

Finally, they examined whether Freedom House changed the freedom level within five years of the arrest.

Of the 243 cases since 1972, 74 involved a free state that sought to hold a current or former leader accountable in the judicial system. In 76 other situations, a “not free” state arrested, indicted or imprisoned a former leader or current occupant. In the remaining 93 cases, it was a partly free country whose government pursued an existing or ex-leader on a legal charge. As that breakdown makes clear, legal action has taken place across the board.

Finally, our data also underscores that holding leaders accountable does not send a country spiraling downward. Within five years of legal action toward a current or former leader, the country kept the same freedom designation in most cases (185 times). In 31 additional examples, the country actually became freer. In the remaining 27 scenarios, the country became less free, with 13 cases resulting in a country temporarily losing its free designation. More than 80 percent of free countries maintained their threshold even after judicially detaining a current or former leader.

For perhaps the best comparison to the United States, we can take a more in-depth look at the most developed countries, those that are members of the Organization for Economic Cooperation and Development. That offers 27 cases to examine — and of these, only two OECD countries became less democratic within five years of arresting a current or former head of state: Mexico and Turkey.

“Other OECD countries with former leaders who have faced legal charges,” he adds, “include Turkey, South Korea, Poland, Greece and Slovenia.”

His argument is essentially this: Other nice countries have arrested their political heads of state and that didn’t make them banana republics, so what happened at Mar-A-Lago doesn’t make us a banana republic so shut up, you guys.

You could drive a fleet of trucks through the hole in that logic. Actually it’s not even a hole, because holes have definite edges. There are no edges to Tures’s logic: it’s nothing but hole.

See if you can spot the fallacy:

Q: Did you or did not engage in sexual intercourse with her?

A: What if I did? It’s a normal human activity! Plenty of really nice guys have sexual intercourse with really nice women every day! In fact, a study of five million heterosexual women showed that almost all of them enjoyed sexual intercourse very much and considered it an important part of their romantic relationships.

Could you spot the fallacy? No? See if this helps:

Q: You beat her, held a knife to her throat, and threatened to kill her if she offered any resistance. Then you raped her. Is that a normal human activity?

See how that works?

“Plenty of people drive on the grass, you see it all the time, why you gotta make a federal case out of it?”

“You drove onto the field in the middle of the game, ran over a dozen people, and your blood-alcohol content was five times the legal limit.”

Hyperventilating cable news personalities notwithstanding, there hasn’t yet been a whiff of anything more significant or substantial at stake than a former president having held onto confidential documents longer than he should have.

If there was a compelling reason to act so swiftly and with such blunt force, it hasn’t yet been made public. That gives the raid the aura of something that was done by choice rather than necessity, which is enough to give it a whiff of politics. If you can’t see that, you’re deliberately looking away. You don’t have to believe it was politically motivated to see how easily it could be perceived that way by others.

What’s more, the raid on Mar-A-Lago was hardly an isolated incident. It didn’t happen in a vacuum. Democrats have been going after Trump relentlessly since before the man was even elected. The grapes have never been so sour. I’ve repeatedly listed on this blog the ways in which the Democrats weaponized the intelligence and law enforcement instruments of the federal government against Trump and his administration—and his supporters. That’s not how American opposition parties have operated in the past. And when I say “in the past,” I mean ever. (With the possible exception of a brief period during the 1860s.)

Then the examples provided by Tures are irrelevant.

“Plenty of healthy democracies—almost all of them—have strict restrictions on abortion.”

“Plenty of healthy democracies defend their own borders.”

Even if the heads of state of every so-called western democracy were arrested tomorrow, and their nations were actually better and freer democracies five years from now, that still wouldn’t say anything about America. America is not Colombia or Iceland or Mexico—or Denmark or Germany or Ghana. It’s America. And it needs to be measured by American standards.

After all, the kid with the peanut allergy isn’t assuaged by the “data” that millions of kids eat tons of peanut butter and are doing just fine.

By American standards, what happened at Mar-A-Lago has the look of a dirty political stunt—dirtier than any we’ve seen in American history. . . ot at least the dirtiest thing we’ve seen since the Russia hoax.

What does Tures have to say about that?

Only this: hey you guys, it’s not like American presidents have never been hassled by the cops!

In December 1872, (then-President) Grant was caught speeding in his horse and buggy in the nation’s capital. He paid a $20 bond but didn’t show up in court.