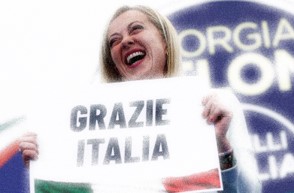 The hot-take out there in the wake of yesterday’s election in Italy seems to be that Europe is turning to the right. (Sweden did it! Italy did it! My god, it’s a pandemic!)

I don’t believe any western European electorate ever really turns to the right: they just sometimes turn away from the left long enough for the right to clean things up. Once things are straightened out the right is shown the door.

DR: Everything points to an election victory for the Italian right wing: “The people have sent a clear signal”

Politiken: Analysis: Post-fascist party became the big winner in Italy. Now they are holding their breath in Brussels

(All the “post-fascist” phrasing is interesting. Should we begin referring to America’s Democratic Party as a “post-slavery” party?)

As for the “fierce power struggle in Europe” that has unspecified people “holding their breath in Brussels,” one wonders whether the waters were more stirred than stilled by EU Commission President Ursula von der Leyen’s warning on Thursday that “if things go in a difficult direction, we have the tools.”

Yeah, yeah, it was couched in a lot of happy talk about how of course the EU supports all of its members following democratic norms and obeying EU rules, and her aides scrambled to clarify that that was all the EU Commission President had meant to convey, but ask yourself: if a far-left party stood poised to win an election in a populous European nation, would it have even dawned on von der Leyen to make such a statement?

The question answers itself.

Leftist ideology doesn’t scare the EU. Voters turning away from it does.

And that’s what Brussels is worried about: the third most populous state in the union just turned away from the kind of institutional leftism that’s insisted upon by the EU. By the entire GLOB.

What’s more, it appears that Giorgia Meloni will be Italy’s first-ever female head of state—take that, glass ceiling!—but not a single one of Denmark’s leading headlines made note of that. Does this mean we’ve achieved such gender parity in Europe that it’s no longer noteworthy?

Or does it just mean that only leftists can break barriers?

Another question that answers itself.

Jyllands-Posten was alone among the big Danish news outlets in identifying the winner of the election as a woman, but even they had to describe her as a “post-fascist woman.” (An example of the infamous post-fascist ergo propter fascist fallacy.)

Search “Meloni” on the Google news tab, and you can see the phenomenon is not unique to Denmark:

The top headlines are peppered with the far-right moniker but not a single one makes a mention of her being the first woman to lead Italy.

The Wall Street Journal cites some of her “far right rhetoric”:

Noting the record-low turnout of just 64%, Ms. Meloni said many Italians felt alienated from the country’s political institutions and vowed to work to rebuild people’s trust in their democracy. “The goal we set for ourselves as a political force is to make Italians proud of being Italian again, proud of waving the tricolor flag,” she said.

Sounds familiar to these American ears.

The left doesn’t like people being proud of their countries. They call such pride “nationalism” and can get quite worked up over it: why, it’s just a stone’s throw from fascism (or semi-fascism)! Their aversion to national pride is surely rooted in their internationalist outlook, which is very short-sighted of them, as Chesterton noted all the way back in 1922:

Exactly: the EU will never hold together by reconciling the continent’s many “Europeanists.” Its only hope is to effect a reconciliation of European nationalists. That is: only men and women who love their own countries more than they love Europe can build a Europe that will be loved by their countrymen: men and women who love the idea of Europe more than they love their own countries aren’t even fit to represent their countrymen—because they don’t.

The elevation of nationalists ought therefore to be celebrated by Ursula von der Leyen—and by anyone else who supports a robust European Union.

But the people “holding their breath in Brussels” don’t seem to understand that. Nationalism, patriotism, love of country—whatever you want to call it—they see it as a danger, an obstacle, a threat. Their hostility is an expression of fear.

And in their fear they lash out—often viciously.

There’s a lot of commentary today on the conservative side of the internet about the injustice of calling Giorgia Meloni a fascist. I understand the impulse but I think it’s a wasted effort. It isn’t fascism her detractors are afraid of: it’s her unrepentant love of Italy. As absurd as it sounds, the international left is terrified by any politician or party that holds the needs of their own country paramount. That’s why parties (like the Danske Folkeparti here in Denmark) that embrace the welfare state agenda wholeheartedly but oppose immigration are described in the press as “far right.” They’re not remotely conservative, they’re just unwilling to concede that the needs of other nations and peoples are more important than the needs of their own nation and people. So they have to be driven off the leftist reservation.

There’s no point trying to prove Giorgia Meloni isn’t a fascist, or that her party isn’t fascist, because most of the people throwing the accusation around don’t even care, and most westerners have become immunized to anyone right of center being called a fascist by the press because everyone right of center is sooner or later called a fascist by the press.

They just chose the word because it was the nearest blunt instrument with which to whack her—and as a nationalist she had to be whacked.

I could leave it at that, but there’s one smaller point in all this that strikes me as curious:

Every major city in the western world makes an ostentatious month-long display of Pride for people’s individual sexual preferences. It’s a glorious thing to take pride in your choice of sexual partners—rainbow flags are hoisted, there are festivals and parades and Netflix specials.

But expressions of pride for one’s country are considered scary and dangerous.

Proud to be pansexual furry? Share your pride with the world!

Proud of the country in which your pansexual furryhood can be celebrated? Crawl back under your rock, you monster!

What sense does that make?

The question answers itself.