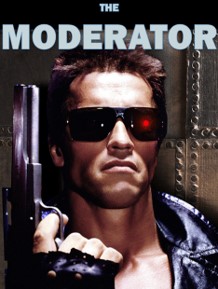 The rise of the new Moderates (Moderaterne) party in Danish politics is a phenomenon worthy of examination by the citizens of every western republic currently experiencing high polarization—which is probably everywhere.

As a public service to all self-governing citizens of the western world, I’ve managed to wrangle an interview with the man behind the movement: not Lars Løkke Rasmussen (the leader of the Danish Moderaterne party), but the incarnation of moderation himself: THE MODERATOR.

It was supposed to be a thirty-minute interview with video, but upon arrival at the AmerikanskeTilstande offices, The Moderator announced it would be a fifteen-minute with audio only, “as agreed.” That’s when we began recording.

(My questions and comments are in bold; The Moderator’s answers, comments, and threats are in italics.)

I’m pretty sure we agreed on half an hour, and with video.

No, that is what you agreed to. The Moderator always negotiates.

I don’t remember any negotiation.

But there was no one to compromise with—if you didn’t want to do the full half-hour, or video, you could have just said so.

Enough, I get it. Anyway, thanks for taking the time to talk to me.

No problemo, it’s the moderate thing to do.  I am The Moderator. Glad to be here—but not too glad! Ha ha, that was a moderate joke.

Right. So let’s get started: you must be very busy these days.

Yes, life is always intense for The Moderator.

Maybe you ought to find a better place to stay.

You know, if your life is always “in tents.”

Ah, you are making a joke.

It wasn’t a very good one, sorry—

Fine. Your party seems to be doing pretty well in Denmark.  Why do you think that is?

It is good you asked. There is much polarization.  The Moderator seeks compromise.  People like compromise.

You think people prefer a mix of left and right policy?

Not all people.  But many.  Yes.  The Moderator will keep moderating people until all the whole world has been moderated.

Can you give an example of the kind of policies you support?

But compromise is negotiation, and negotiation requires a difference of opinion, right? Otherwise there’s nothing to negotiate. Are you saying you’re not for anything at all?

You are a very stupid man. How many times The Moderator has already told you? The Moderator is for moderation, for compromise. Is your little head too dumb to understand?

There is always middle ground. You could kill half the blondes and protect the other half. Or maybe leave the blondes alone and kill all the gingers. Compromise isn’t easy, you have to be creative.

I’m not sure you got the moral dimension of my question...

Ha, very good, you keep with the tricky questions. But you can’t fool The Moderator. Morality is relative. It’s just another compromise. It’s not up to The Moderator to have morality, only to moderate the other moralities.

So… kill all the gingers, that’d be an okay “compromise?“

Hey, don’t quote me on that, okay, buddy, ha ha ha? It’s just one possible path to bring people together.

Everyone but the gingers.

That’s compromise: bringing people together requires that not everybody gets everything they want.

Why do people need to be brought together?

The Moderator brings people together because that is the purpose of compromise.

I get that, but who says bringing people together is good?

Silly man, all the people that the Moderator has moderated!

But you said morality is relative, so isn’t the idea that people need to be brought together, politically at least, also relative? You’ve only got the support of about 10% of the Danish electorate, and probably not much more than that anywhere else, so doesn’t that mean around 90% of voters aren’t interested in compromise as a policy platform? Isn’t there a pretty big contradiction there?

The Moderator’s work will not be done until everyone is moderated.

Right, but the vast majority of voters don’t want to be “moderated,” so—

It doesn’t matter, no one’s going to see it because you wouldn’t let us take video—

The Moderator did not just fall off the turnip train! People can hear when you say it like that.

How can compromise be democratic when the majority of voters oppose it?

They don’t oppose it, they don’t understand it, because like you they are stupid little dum-dums. On the left and the right. That is why you must do like The Moderator says. Because The Moderator is in the middle, not a crazy dum-dum like you who thinks only left or only right. The Moderator takes this from the left, and this from the right, and puts it all together and mixes it with love and makes the world taste good.

That’s not The Moderator. That’s The Candyman. From Willy Wonka.

Would you describe yourself as willing to compromise on your principles?

Common sense according to whom?

According to The Moderator.

Are you confident your “common sense” is shared by—

There’s those finger quoteys again, and the thing with your voice. Now you make The Moderator a little angry. Now The Moderator says: no audio.

Well, we already agreed on—

The Moderator says no audio.

The Moderator already said we could—

So I can use the audio?

I want to use the audio and you say no, even though you originally said that was the compromise between me wanting video and you not wanting it, even though—

This interview is over.

I still haven’t got to—

You are being moderated. You will all be moderated. Then you can relax and let The Moderator make all the decisions, which will be moderate and bring people together, and you will be happy.

I don’t want to be moderated.

But so many others want you to be, so that is The Moderator’s compromise.

This interview is over.

Thank you for this chance to bring people together.

If there is video or audio of this interview online you will be terminated.

So fun and funny and on point. Sharp!

I hope your readers listened (will listen) to the audio. As the Poles say, Wspaniały!

Danish is cruel to English speakers because it has words that begin with “ydm,” but to begin a word with “wsp” is beyond cruel.