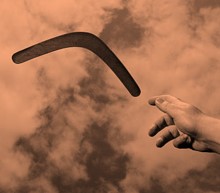 AUDIO NOTE: No audio today, just ran out of time. Maybe I’ll add an audio version of this post later in the week, after I’ve upgraded the default WordPress audio player to something better—i.e., pretty much anything.

Notice what didn’t happen in America this week?

Precisely as I foretold you.

How did I know? How could I be so confident that I would be so darn right?

Because it was always just a scare tactic to fire up the base.

You didn’t need to hear that from me: you knew it just as well as I did. Everyone did—except a few thousand jittery swing-state Democrats, for whom it was the most terrifying prospect ever and got them fired up enough to vote in an election they would otherwise have sat out.

A contemptible tactic, but apparently an effective one. As the late and unlamented Harry Reid might have observed: “It worked, didn’t it?”

Republicans must therefore Boomerang Principle the deuce out of this thing all the way through to November 2024.

Democrats made a new rule, so the one unalterable rule of political equilibrium—the Boomerang Principle—demands it be put to immediate use against them.

The only organizing principle on left these days, in America and Denmark alike, appears to be top-down control: the government knows best and only wants what’s best for you and should therefore have all the power to make all the decisions—and even more power to enforce them.

Opposition to the government is therefore tantamount to treason, insurrection, et cetera.

It’s a tough sell when you lay it out as baldly as all that, so they tend not to do so very often.

But sometimes they do.

“In the future, you’ll own nothing and you’ll be happy.”

That seems to be the closest thing to a mission statement the GLOB‘s been able to come up with.

As the Danish communist Ida Auken wrote for Forbes magazine back in 2016:

It might seem odd to you, but it makes perfect sense for us in this city. Everything you considered a product, has now become a service. We have access to transportation, accommodation, food and all the things we need in our daily lives. One by one all these things became free, so it ended up not making sense for us to own much.

Let’s zoom in on one sentence: “Everything you considered a product, has now become a service.”

Business people will recognize Auken’s model immediately: it’s just like Software-as-a-Service (Saas), Infrastructure-as-a-Service (Iaas), and all the other Things-as-a-Service that have been rocking the business world over the past decade or two.

The GLOB is ready to go all-in on LaaS: Life-as-a-Service.

Why not, right? Most people stopped buying music and videos years ago, choosing instead to subscribe to streaming services. For the price of one new album or CD per month, we can now access pretty much every piece of music ever recorded by anyone, anywhere, ever, and hear it on virtually any device at any time.

Why couldn’t that work for houses, cars, and food?

My own answer comes in the form of two questions.

First, when accommodation “becomes free,” what happens to the people formerly known as the “owners” of a given property? I have a house, after all. Herself and I have staked a lot of our eventual retirement on our investment in this house. If housing is going to be “free” in the very near future, how are we—and billions of people like us—going to be compensated? There’s literally not enough money in the world to buy every private residence on the planet (estimated value five years ago: 168 trillion dollars, or more than one quadrillion kroner) at fair market value. If home owners aren’t compensated for the fair market value of their homes, then everyone’s equity goes up in smoke, and congratulations—you’ve destroyed the global economy. (But don’t worry, the GLOB lacks not only the money but the manpower to requisition every private home in the world.)

Secondly, and more to the point, from whom would all these services be rented? The act of rental requires the existence of at least two parties: a lessor and a lessee. Another word for “lessor” is owner. So wouldn’t it be fair to say the Auken/Forbes/WEF “vision” doesn’t abolish ownership, but simply transfer it? And if I understand correctly, that transfer would be from the individual to the state. Meaning the state would own… everything?

When people tell you they want the government to own everything, you better pay attention.

When Ida Auken says, with the tacit approval of Forbes magazine and the World Economic Forum, that “you will own nothing and be happy,” she’s actually saying “the state will own everything and you will be happy.”

She forgets to add: or else.

That’s an important corollary to the vision. When the state owns everything, you had damn well better be happy, or the people who control all those “free” rental services—which, according to Auken, will include little things like where you live, what you eat, what you wear, and how you get around—may be inclined to downgrade your services.

I’m unable to identify any significant differences between Life as a Service and straight-up communism.

When that’s the vision of the global left, it’s easy to understand why leftist parties in America, Denmark, and elsewhere stick to single-issue cohort building at the retail level.

There is no “global right” to speak of, since conservatism is by its nature national in character, but one can certainly detect the emergence of a growing coalition of liberty-minded, market-oriented conservatives around the globe, especially in the Anglosphere. It’s not unusual, for example, to see Canadians, Australians, Americans, Brits, and others of the right-wing commentariat appearing on each other’s broadcasts and podcasts. Just the other day, for example, I watched a fascinating conversation between the Canadian philosopher-psychologist Jordan Peterson, the American commentator Ben Shapiro, and the soon-to-be-reelected Israeli Prime Minister “Bibi” Netanyahu—some of which was spent discussing the leadership lessons of the British Winston Churchill.

The “coalition” of which I speak—not of those three men, but of the Anglophonic right—arose of necessity in opposition to the genuinely global left, which seeks erasure of borders of the abdication of national sovereignty to global (and globalist) organizations. When you hear leftists complain about the wave of “populism” or “nationalism” cropping up across the western world, it’s that loose coalition they’re complaining about. And what they’re really bemoaning is the resistance to their own globalist vision.

The “threat to democracy” that had American Democrats all fussed up until last Tuesday evening was no such thing: it was a threat to Democrats’ power. That’s the new rule, remember. That’s how I opened this thing. (And we’ll get back to it in a moment.)

Saint Greta of Stockholm let the cat out of the bag just a week or so ago, coming out hard against capitalism—and western civilization itself—as being incompatible with her own fairytale future.

But it was hardly a secret, as Auken’s 2016 article and the WEF’s commitment to “the Great Reset” attest. The globalist left wants to abolish capitalism and transfer ownership from individuals to the state. The globalist left despises nation states, market economies, competition, and the nuclear family. That’s the vision, the orientation, driving the left across the western world—America and Denmark inclusive.

And conservatives across the west flail around trying to nibble away at the edges of all that, largely unwilling to state their own vision plainly or to call the left out for what it’s become.

Which is crazy because when they do, boy howdy—they win!

Not everywhere, not all the time, but enough to make you wonder why they aren’t all doing it.

Italy’s Giorgia Meloni is a perfect example. She ran as a nationalist, a Christian, and a mother. And she won. The majority of westerners, it turns out, don’t actually want their governments running every aspect of their lives, and they don’t want their governments bending the knee to unaccountable trans-national groups. They want to live their lives in peace: get an education, get a job, get married, raise a family. Or live fast and die young, or live alone in the woods as a hermit to the end of their days. Or whatever. What they want to do with their lives is beside the point: what matters is that they want to be able to live their lives on their own terms. They don’t want Life-as-a-Service. They want life as life.

(I said the majority of Westerners, remember. Certainly an appalling number of free-born citizens yearn for a government to impose some order on their sad and pointless lives.)

Naturally the international left had to brand Meloni a fascist, because that’s what they do to people who aren’t down with their program: they call them names. Fascist, white supremacist, insurrectionist, whatever. It’s the Corky St. Claire method, and it seems to work.

Gosh! It’s almost like he was saying “The State will own everything, you will own nothing, and you will be happy.”

Giorgia Meloni isn’t a fascist but the people lashing out at her were fascists. (Ooh, but she once joined a party that had connections to Italy’s fascist past! shrieked American leftists… who support a party with connections to Jim Crow and slavery.)

Western conservatives need to champion their vision of individual autonomy in sovereign nation-states ordered by the rule of law, of government as small and as local as practicable, built up from the institution of family rather than over it.

It’s a winning vision because everyone knows it works. It gives them what they want, which is a chance to build the lives they want for themselves, their own way.

They just need to be reminded.

And thanks to the new rule introduced by Joe Biden & company, it’s now perfectly acceptable to thunder against Democrats (and Social Democrats and so on) as fascist communists who want to take ownership of your home, your clothes, your car, and your food, and rent them back to you as streaming services.

After all, they are actively (and avowedly) working to dismantle the nation state, free enterprise, competition, and the nuclear family. They are the enemies of civilization and the only hope for any free-born, self-governing, self-respecting people is to reject them categorically.

The stakes could not be higher. Civilization is at stake.

They poured this draught of poison, and it’s past time they were forced to drink of it.

I prescribe at least shot or two a day, daily, until November 2024.

Oh—and by the way, it’s most effective as a suppository.