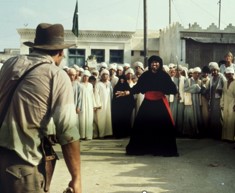 One of the most iconic moments in 1981’s Raiders of the Lost Ark comes during a chase sequence through the crowded and colorful streets and alleys of Cairo.  Indiana Jones suddenly finds himself surrounde d by a crowd from which emerges a menacing master swordsman.  The swordsman brandishes his sword and swishes it masterfully around in an intimidating display of his prowess with the weapon.  Indy, already exhausted from an unrelenting series of beatings and bruisings, appears to be facing certain doom—then wearily draws his pistol and shoots the swordsman dead.

Apparently the scene wasn’t originally scripted that way: Indy and the swordsman were supposed to have an epic battle.  The production was facing scheduling pressures, however: they needed to wrap up their Cairo shooting to get back to London swiftly, but Harrison Ford was suffering from dysentery and in no shape for the two to three days of shooting it would take to get the scene shot.  Something had to be done to get the scene in the can as quickly as possible, and legend has it that Ford and director Steven Spielberg both arrived at the same idea independently: why not have Indy just shoot the swordsman?

It’s apparently now considered a “problematic” scene and you’re a terrible person for ever having thought it was funny:

In his book Indiana Jones in History, author Justin M. Jacobs writes about the history of archeology and what it meant for Western society. To him, the swordsman scene is quite insulting precisely because it embodies a series of messages that reflect a repellent representation of how Western archeologists treated foreign countries in the name of scientific preservation. Even if the filmmakers weren’t aware of this, by approving this scene and laughing about it, we are brushing over the fact that it is celebrating a Western modern superiority.

Jacobs considers that the scene hides two specific messages. “The first is that traditional Oriental masculinity is no match for a Western scientist armed with more sophisticated weaponry,” he writes. The second is that killing is funny and okay when the character is secondary and therefore expendable: “If the Arab swordsman mattered to the story in any way at all, this scene would not be funny.” This sort of representation is in line with other entertainment film discourses that are highly subliminal yet effective in driving audiences to be emotionally captivated and invested in a narrative.

Indiana Jones is fighting Nazis and their collaborators.  Most of the Egyptians at this point in the action are also working against the Nazis.  The swordsman is therefore no mere stand-in for all Egyptians, let alone “Oriental masculinity.” He’s a Nazi collaborator: a bad guy, a villain.

As for the two hidden messages: traditional Oriental masculinity is obviously no match for anyone with more sophisticated weaponry. Neither is traditional Occidental masculinity. That’s the whole point of the gag—that’s what makes it a gag. Swordsman’s all, “Behold my mastery of the sword! Despair and prepare to meet your doom!” And Indy’s all, “Say hello to my little friend.”

And killing can indeed be “funny and okay” when it’s a secondary character, provided the context is appropriate. For example, killing a villain’s henchman by having him decapitated by an ill-tempered mutated Sea Bass.

That’s funny… and it only gets funnier when there’s an entire scene dedicated to elevating the brutally killed secondary character into someone with an actual inner life.

But let’s not get all bogged down in idiocy.

I mean, let’s not get bogged down in that idiocy.

Qatar is an independent constitutional emirate   It’s been independent from the UK since 1971 but has been cozy with the west since the 19th century, largely as protection against the wicked old Ottoman Empire.

It’s an Islamic country whose citizens are mostly of Bedouin heritage, but whose inhabitants are almost 90% foreign. (Wikipedia says 88%, the CIA Factbook says 88.4%.) There’s obviously something a little off about a country whose citizens constitute less than 12% of its population, but we’ll pass over that for now.

FIFA, the global soccer organization, was heavily criticized for allowing Qatar to host this year’s world cup.  Most of the criticism had to do with the weather in Qatar, one of the hottest countries in the world.  That’s hardly an optimal location for an exhausting outdoor sport of endurance.

Besides being hot, Qatar is also rich.  Crazy rich.  Fuck-you rich.  Whether their selection as the host of the 2022 World Cup was made legally and ethically or involved a little behind-the-scenes baksheesh is a question that’s received a lot of attention, but I’m going to ignore that, too.

What’s got the west agitated is Qatar’s laws against sodomy. (Okay, there’s sometimes a little talk about the conditions of the country’s “guest workers,” but if those “guest workers” had been building floats for the world’s biggest Pride parade, do you think anyone would care about their treatment?)

There’s been a massive groundswell of outrage at Qatar’s oppression of homosexuals.

That groundswell is, as usual, being expressed in very showy ways that have very little impact and are therefore unlikely to accomplish much of anything.

There are flags and logos and memes and tee-shirts and armbands and gestures.  Oh my lord, the gestures.  Gestures and more gestures.

And when the gestures are banned by FIFA or the Qatari authorities, we get gestures expressing outrage over the banning of gestures.

The Swordsman is whirling and twirling the sword of outrage with astonishing dexterity, slicing and dicing the empty air, carving his baroque and elegant curlicues with breathtaking precision and control.

Reality just stands there with a cocked revolver.

The Swordsman isn’t trying to intimidate Reality: he’s trying to impress the crowd.

“Hooray!” chants the crowd, “Love is love! Damn these homophobic Arab Muslims, who are otherwise such a valuable thread in the beautiful fabric of multiculturalism! Hooray for the swordsman of Diversity, Equity, and Inclusion! Yay!”

The Swordsman glows with pride; he sheaths his sword and bows—repeatedly, because the applause won’t stop.  The crowd has really gone wild.  What bravery!  What dexterity!  What a tremendous blow for goodness!

Eventually of course the applause dies down; the Swordsman gathers up the roses that have been cast at his feet and follows the crowd off down the street, where there are rumors of another ugly Reality that needs to be addressed.

And this Reality is still standing there, unhurt, unfazed, watching with bewildered fascination as the Swordsman and the crowd disappear in the distance.

That’s the metaphor for Qatar.

It’s the metaphor for the Uighurs.

It’s the metaphor for Ukraine.

It was the metaphor for the 2009 “Green Revolution” in Iran.

It’s the metaphor for the uprisings in Iran and China right now.

Sound and fury, all of it, signifying our cultural impotence.

China will crush the current uprising just as ruthlessly as they crushed the protestors in Tiananmen Square 30 years ago.

The Iranian theocrats will crush the current uprising just as ruthlessly as they crushed the protestors of the Green Revolution.

Because they know the west is too flaccid and cowardly to do anything but twirl our shiny swords around at the empty air.

Yeah. You nailed it.

And just to lay down the marker: The Indy swordsman scene is the single greatest scene of all scenes with Indiana Jones across all the movies. It is so precisely because it subverts our expectations, trained to Pavlovian reflex standard, by decades of Hollywood movies, in a way that both surprises the viewer and has him or her immediately going “Of course! That makes perfect sense. How could it be otherwise?” And that small shock is why we laugh, not because yet another villain is killed, because we knew very well going into the scene that Indiana would prevail and survive.

But leave it to the hashtag brigade to get everything wrong as usual.

Well, in a perfect world Blazing Saddles should have been posted in its entirety… and downloaded and saved by everyone because I just can’t imagine that movie’s going to be allowed to survive much longer in this age of moral hysteria. I’m surprised it hasn’t been memory-holed already, or slathered with trigger alerts and content warnings.