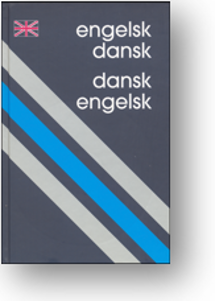 Herself and I were startled when Joe Biden’s inaugural speech, being broadcast live by DR, was suddenly accompanied by a real-time audio translation into Danish.

One doesn’t encounter a lot of English-language dubbing in a country where 85% of the population speaks English (the ratio is higher among the younger generations and lower among the older). English-language programming always offers Danish subtitles, but it’s only children’s programming and films that are dubbed from English to Danish (animated films with cross-generational appeal are often released in dubbed and subtitled versions); on television and radio news and culture programs, footage that’s in English is usually translated or summarized into Danish by the host after the segment has concluded, but is also sometimes left to stand without translation.

Biden’s inaugural was the first time I had ever experienced simulcast translation, and it was jarring.

Apparently it wasn’t just Herself and I who felt that way:

(“Detektor” is an investigative journalism program on DR.)

Not everyone was equally excited about the decision [to simulcast an audio translation]. Many complained about the real-time translation on social media, because they found it confusing.

Some felt that the translator’s audio was too loud, and that too much of the talk went over the president’s speech. Some also thought there were errors in the translation.

Translation is a wildly difficult thing. It’s easy enough to translate basic stuff: phrases like “Where’s the bathroom?”, “Is this beef or pork?”, or “I am not Mrs. Schroeder.”

We’ve had frequent misunderstandings within our own little family of four simply because one of us used a literal translation from Danish to English, or vice versa, that didn’t quite work. These are often hilarious (at least in retrospect), especially when they come out in the middle of a heated argument.

During an emotional disagreement in the earliest years of our relationship, when we still lived in America, I once had to interrupt Herself to correct a phrase she was using to criticize me. I no longer remember what the phrase was (it was a very sharp criticism, very angrily delivered, so my ego probably told my memory to let it go), but I will never forget the expression on her face as she cocked her head, stared at me a moment, and then asked, “is that what I mean?”

To raise our children as fully bilingual, Herself and I would only speak with our daughters in our own native tongues, she in Danish and I in American English. We insisted they only speak to us in the same language: this meant, when they were very little, pretending not to understand what they were saying if they used the “wrong” language.

The only area in which this posed a problem was when they were pre-literate and wanted me to read them one of their favorite Danish books at bed-time. I would have to translate on the fly, and the difficulty was staggering—and I’m talking about books of maybe twenty or thirty pages, max, with a mere sentence or two on each page, books I knew by heart, like The Mole Who Wanted to Know Who Had Shit on His Head.

The idea of translating something as complex and referential as a presidential speech, to a national audience, in real-time, is unthinkable to me. The translators have nothing but my sympathy.

Sofie Frøkjær’s article does a good job of exploring the challenges faced by the translators, and includes several comparisons of how different passages were handled by the translators on DR and TV2. It’s an interesting article, and is mercifully free from politics.

It got me thinking about some of the challenges I face when translating between Danish and English on this blog.

One thing that’s confounded me for the duration of my life in Denmark is how to translate borgerlig into English. Danish readers may have noticed I have no standard translation: I’ll simply roll with the context and replace it with “conservative,” or “right-of-center,” or “right-leaning,” or “classically liberal,” as circumstances warrant. Sometimes I’ll just despair and leave it untranslated.

What it literally means is “bourgeois.” But I don’t think Americans would know what to make of phrasings like to “the editorially bourgeois Berlingske-Tidende,” or “the bourgeois bloc in parliament.”

“Bourgeois,” in American usage is almost always ironic: its use through most of the second half of the last century as a pejorative by the far left to criticize everything middle-class and suburban was so heavy-handed that it became useless. To label something as bourgeois was the ultimate communist dismissal. At a party in my own L.A. apartment, back around 1990, I was once castigated by a militantly Marxist French director for having a dishwasher: “ze bourgeois boy must have ‘is dishwashair,” he sneered. (And then helped himself to more of my wine.)

But without a reliable word for borgerlig, discussing the right side of Danish politics in English gets even more confusing. How to explain to Americans that one of the major right-of-center parties (until very recently the dominant one) is called Left, and that another is called the Radical Left? Or that the most wildly libertarian party in Denmark is called the Liberal Alliance?

For similar reasons, aware that I’m trying to write in English for a Danish audience, I’m often reluctant to use the word liberal to describe American leftists: it’s why I tend more often to speak of the left, or leftists, or progressives.

A Dave Rubin video from a couple of days ago, for example, features an excerpt of former CIA Director John Brennan expressing concern on MSNBC about an “insurgency” by “an unholy alliance” of “religious extremists, authoritarians, fascists, bigots, racists, nativists, even libertarians.”

You can see the entire Brennan segment beginning around 5:44:

Brennan says (approvingly) that he’s aware of a “laser like” effort in the Biden administration to uncover these insurgents. He wants this this “serious and insidious threat to our democracy” to be “rooted out.”

Rubin has some fun mocking Brennan’s illiberalism, and the very idea of authoritarians and libertarians getting together on anything, and then a little more fun with an equally illiberal excerpt (starting around 11:07) of former Good Morning America co-host Katie Couric asking Bill Maher rhetorically “how are we going to really almost de-program” the 74 million Americans who have “signed up for the cult of Trump?”

Nothing says “liberal” like the idea that people who disagree with you on politics are brain-washed cultists in need of deprogramming. Or insidious insurgents that need to be “rooted out” of the body politic.

According to the Frøkjær article, the simultaneous translators of the inaugural speech struggled in particular with President Carter (who became “Connor” on one channel), Saint Augustine (known to Danes as kirkefaderen Augustin, or “church father Augustine”), and the Biblical book Ecclesiastes (known in Danish as Prædikerens bog, or “the Book of the Preacher”), as well as the Emancipation Proclamation and a bit of Biblical verse.

The difficulty in these cases wasn’t because the translators didn’t know what the words meant, or who the people were, but because there was a little cultural translation going on alongside the linguistic translation, as there always is.

The article also compares interpretations of Biden’s quote from Psalms:

And I promise you this, as the Bible says: “Weeping may endure for a night, but joy cometh in the morning.” We will get through this together. Together.

So what TV2 said was, “And I promise this, which is says in the Bible, ‘Happiness comes after the night. Happiness comes in the morning, in morning time.’ And we shall stand through the night in fellowship.”

(You may or may not recall that Biden made headlines around Thanksgiving when he twice in one sentence pronounces psalm as palm.)

But it raises an interesting point about translation.

Mayor Richard J. Daley of Chicago spoke in such a discombobulated mess of words that his press secretary famously told reporters, “Write what he means, not what he says.”

That’s essentially the job of every translator: not simply to convert whatever words their subject is saying from one language into another, but to convey the meaning of those words from one culture to another.

And that’s exactly what America needs right now: translators. People who can facilitate communication between right and left. Because clearly we’re speaking different languages, but because we use so many of the same words it’s too easy to assume we’re talking about the same things.