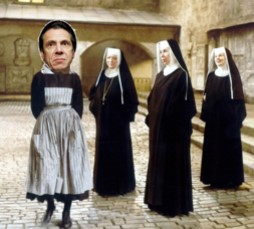 The big story in American politics right now is the release of a report from the New York Attorney General’s office concluding, among other things, “that the Governor engaged in conduct constituting sexual harassment under federal and New York State law.”

That governor would of course be one Andrew Cuomo, son of former New York Governor Mario Cuomo and brother of CNN host Chris Cuomo. The self same Andrew Cuomo who wrote “America’s Crisis: Leadership Lessons from the COVID-19 Pandemic” and won an Emmy award for his thrilling daily press conferences during the early months of the pandemic. The same Andrew Cuomo who was being bruited about by the sages of cable television and the scriveners of America’s establishment press as a possible replacement for Joe Biden at the top of the 2020 Democratic ticket.

He was the hottest politician in the United States. But the women thought he was disgusting. They were right.
Mikkel Danielsen, Berlingske.dk, August 4

Another powerful man poised for a fall, but he won’t go down without a fight
Marie Jensen, TV2.dk, August 4

TV2’s feature photo has Cuomo paired with fellow serial sexual miscreant Bill Clinton back in 2014, presumably in case their readers were confused by the use of “another” in the headline.

Information.dk had no article up as I was sniffing around this morning. I figured they’d have a story by the time I got ready to publish this article, and they did, but I had to use their search tool to find it: “USA-expert expects governor’s departure after harassment cases.“

The New York Times has Cuomo stories splashed all over the top of their home page, with pride of place going to a story entitled “Under Fire and Alone, Cuomo Fights for His Political Life.” The file name of that story, embedded in the URL, is interesting: “cuomo-guilty.html.”

Unsurprisingly, CNN—where the governor’s brother Chris hosts a prime-time news program—took another angle on the story. Here’s a screenshot from their home page as of about 10 o’clock this morning Danish time:

If you ever doubted the bias and corruption of CNN, let that image purge your doubts forever. The New York Attorney General performed an official investigation and released an official report concluding that, while governor, Governor Andrew Cuomo sexually harassed eleven women, and CNN pretends the most important aspect of the story is what it says about his relationship with his brother.

That particular apple looks an awful lot like a banana, CNN.

In any case, it’s easy to delude oneself into thinking that Democrats now face a problem paraphrased from The Sound of Music: how do you solve a problem like Cuomo?

The musical question answers itself: you don’t.

If Democrats really wanted Cuomo out of office, he’d be gone by now. He’d have been gone in March.

They don’t care whether he’s in or out: they just don’t want him dirtying the brand.

From a Democratic perspective, this is therefore not a crisis to solve but a script to follow. We already had a dress rehearsal back in March, when dozens of prominent Democrats (including almost the entire New York congressional delegation) and a lot of leftist editorial boards and television pundits called for the governor’s resignation when the accusations against him became too numerous to simply ignore.

Now there’s a damning report from the AG out there. Even more Democrats are calling for him to resign. The president himself has joined the chorus.

It’s Democrats versus Democrats all the way down, so Republicans may feel like they can just sit back and enjoy the show. And that’s fine.

But although my cynicism may just be getting the best of me, I don’t think there’s going to be much of a show to enjoy.

If Cuomo resigns, Democrats can and surely will wash their hands of him completely. They might even recall his Emmy award. That awful man—that monster!—who knew?! Then they’ll say it’s time to move on.

If Cuomo declines to step down, the New York state legislature will have to decide whether or not they want to impeach him.

If they do, Democrats everywhere else will say there’s a process underway and they don’t want to comment on it until it’s over, and once it’s over, whichever way it turns out, they can say they’re saddened or heartened by the result but the important thing is that we all move on.

If they don’t try to impeach him, then there’s nothing to stop Cuomo from serving out his term and then running for president.

We’ll be told to move on and support him.

And a lot us probably will.

In any case, whichever way it plays out, it’s a mere set piece of theatre for the Democratic power structure at this point, and it serves a very important function: as long as everyone’s talking about his gropey hands and lurid whispers, no one’s talking about the thousands of elderly New Yorkers he sent to their deaths by ordering nursing homes to accept covid-positive patients. No one’s going to talk about how he doctored the official numbers to hide the fatal consequences of that order. No one’s going to talk about the way he used political muscle to keep those numbers hidden.

So if you think the prominence this story is getting bodes badly for Democrats, you’re misreading the tea leaves.