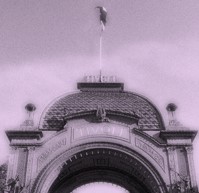 Tivoli Gardens, one of the jewels of Copenhagen, opened earlier this month: it’s renowned as possibly one of the best places on earth.

One of Tivoli’s long-running features is Fredagsrock (“Friday Rock”), a series of Friday evening rock concerts on their open-air main stage through the spring and summer.

The concert on April 15 was a big mess: it actually had to be suspended at one point so police could break up some fights and calm things down.

Tivoli blamed the disorder on covid (by which they actually meant the government’s response to covid): this was a generation of kids, they explained, who hadn’t had the necessary social conditioning over the previous two years to understand how to behave at an outdoor concert in Tivoli.  Apparently it requires a lot of experience to learn that one doesn’t throw punches or whack people over the head with beer bottles—and that it’s considered bad form to stab one’s fellow concert-goers.

Tivoli nevertheless made some changes and the next concert, on April 22, was therefore a different kind of mess: the queue policies they’d instituted to try and prevent a repeat of the previous week’s fiasco ended up causing massive crowds outside the park, with a lot of drunken kids trying to scale the walls to get in.

This, too, was blamed largely on covid.

Well, now Tivoli’s instituted more changes in anticipation of tomorrow’s concert featuring the Swedish pop band Aqua: specifically, they are going to require “place reservations” for the concert and they are going to strictly enforce a limit on how many people will be allowed into the gardens.

However, Tivoli is a lot more than a concert venue.  It’s an amusement park, it’s got gardens and lakes, it’s full of tony little shops and fancy restaurants and cafés, and it’s full of ice-cream stands, churro booths, burger and sausage joints, and even pubs.

Place reservations were made available online yesterday, and were gobbled up in under an hour. Here’s what their website was showing Thursday morning:

I won’t translate the whole message: it’s just saying that all the place reservations for Friday’s Aqua concert have been taken. And they remind you that access to Tivoli after 16:00 will require a place reservation (and the usual entry ticket or entry pass card).

Anyone interested in game theory is probably getting very curious as to how this is going to play out.

Here are the rules of the game:

The best strategy for anyone hoping to see Aqua is therefore obviously to get into the park as early as possible because no reservation will be required between 11:00 and 16:00: the later one arrives, the greater the likelihood one will be denied entrance.

Assuming Aqua doesn’t take the stage until 20:00, those early arrivals will have up to nine hours to kill beforehand.

Maybe they’ll wander the park, have a leisurely lunch, sip some coffee, ride the rollercoasters and enjoy all the other attractions. (Tivoli really is one of the best places on earth.)

Based on Tivoli’s experience the past couple of weeks, if I were part of Tivoli’s management I’d be very worried about that possibility.

I’d worry that kids will be lining up outside the park before the gates even open, that the park will fill up to capacity within an hour or two of opening, and by the time Aqua comes on stage there’ll be an audience of 10,000 raucously drunk teenagers fighting and barfing and god knows what else all over Tivoli—and a lot of angry Danes who took the trouble to get place reservations congregating angrily around the entrances.

Maybe it’ll go smoothly tomorrow: I hope so, because Youngest is among the Danish youth hoping to see Aqua with her friends. (She has no place reservation and won’t be arriving at the park before 15:00, so we’re trying to help her brace for disappointment.)

There is one factor working in Tivoli’s favor, however.

The troubled concerts of the past two Fridays featured Icekiid and Jimilian (on the 15th) and Andreas Odbjerg and Artigeardit (on the 22nd).  Those are contemporary performing artists who have strong appeal to Denmark’s teens.

Odbjerg was nine years old and Icekiid was about nine months old when Aqua’s biggest hit, “Barbie Girl,” was released back in the spring of 1997. Aqua’s next-biggest hit, “Back to the 80s,” was released in 2009.  Anyone who was a teenager when “Barbie Girl” was getting airplay is now middle-aged, and even the tweeners of 2009 are by now well into their twenties.  It’s unlikely that those demographics have forgotten how to behave at a public concert during the two years of lockdowns.

It’ll be very interesting to see how things play out.

But if they do go badly, I have no doubt who’ll be blamed: