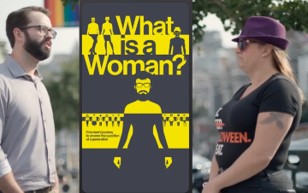 Herself and I watched Matt Walsh’s documentary What Is a Woman last night.

It’s mostly a polemic against our increasing willingness to let our children be irreversibly chemically and surgically altered to bring their physical bodies into harmony with their identities.

That may not sound like a subject that would lend itself to a light, breezy style, but Walsh manages to convey some very serious social criticism in a very entertaining and often even comical way.

Calling Walsh a conservative Michael Moore could be a useful shorthand—they’re both entertainers and provocateurs in the business of agitprop—but Walsh lacks Moore’s mean streak. He doesn’t seem interested in humiliating his philosophical adversaries. He isn’t cruel, he doesn’t mock or taunt.

At least half the movie really does consist of Walsh trying to get various transgender activists to answer his eponymous question: what is a woman? (A question that a sitting justice on the U.S. Supreme Court was herself unable or unwilling to answer during her nomination hearings just a few months ago—probably while Walsh was in post-production: footage of her infamous “I’m not a biologist” answer only appears alongside the closing credits.)

Just ten years ago the responses elicited by Walsh’s elementary question would have been jaw-dropping: who on earth doesn’t know what a woman is? Here in August 2022 they all seem sadly familiar. It’s no longer shocking to hear a gaggle of young women at a “Women’s March” confess that they can’t define what a woman is. It’s no longer weird to hear a professor explain that the word “truth” is hurtful and rude.

Here’s a generalized template of the way the logic plays out with most of his subjects:

WALSH: What is a woman?

WALSH: What kind of identity?

SUBJECT: The identity of someone who says they’re a woman.

WALSH: And what does that mean, to be a woman?

SUBJECT: It means you identify as a woman.

I’m not exaggerating or oversimplifying.

Walsh gets variants of that exact logic from health care professionals, professors, a U.S. Congressman, activists, and even man-on-the-street interviews.

And when I say “that exact logic,” I obviously mean that exact insanity.

Here’s the definition of “woman” from the Oxford online dictionary, via Google: “an adult female human being.”

Here’s the definition from Wikipedia: “A woman is an adult female human. Prior to adulthood, a female human is referred to as a girl. The plural women is sometimes used in certain phrases such as “women’s rights” to denote female humans regardless of age.”

Those were the top results I got out of Google when I searched on “woman definition.”

There’s nothing hateful, hurtful, or “transphobic” about those definitions. They’re rooted in biological reality. They’re the definitions the human race has been working with for all of recorded history.

Of course, these definitions are also slightly circular in that they both rely on the noun female. What’s a female?

OXFORD (VIA GOOGLE): “of or denoting the sex that can bear offspring or produce eggs, distinguished biologically by the production of gametes (ova) which can be fertilized by male gametes.”

WIKIPEDIA: “the sex of an organism that produces the large non-motile ova (egg cells), the type of gamete (sex cell) that fuses with the male gamete during sexual reproduction.”

It’s not that hard.

One of Walsh’s particularly enthusiastic subjects pointedly refuses to use the word “sex” on its own: she speaks instead of people’s “biological sex assigned at birth.”

Walsh presses her a little on this: assigned by whom, on what basis?

Her answer: usually by a doctor, or the parents, based on the physical genitalia.

And Walsh wonders aloud: is that an assignment, or an observation?

“If I see a chicken lay an egg,” Walsh says (I’m paraphrasing from memory), “and I say, that chicken laid an egg, it must be a hen—a female, am I assigning it a sex? Is it not actually female?”

His subject doesn’t bat an eye:

Walsh doesn’t press her any further on this point. There’s no need to.

In every conversation with every subject there comes a point where either the logic is so obviously broken that Walsh himself doesn’t seem to know how to proceed, or where the subjects themselves realize their “logic” is falling to pieces and they either lash out at him (“your use of the word truth is hurtful and rude”) or, as in the case of the U.S. Congressman, they simply end the interview (“this interview is over”).

That only applies to the activists, obviously. On the other side, Walsh speaks to (among others) a seasoned psychiatrist, a trans-man, a couple of female athletes, and a man prosecuted and severely punished by the Canadian government for “misgendering” his own child.

These segments are harder to watch. The subjects aren’t tying themselves up in hopeless logical knots trying to justify themselves: they’re struggling to understand how the society around them could have fallen so far off the rails.

Why are we blurring the lines between the normal sexual confusion of puberty (“but I don’t want boobs!” “why is my weiner getting so big?” “I don’t want to bleed every month!” “ew, why do I have to get hair in all these weird places!”) and the serious psychiatric disorder of dysmorphia?

Why are the devastating long-term effects of chemical castration not part of the public conversation? (The pharmaceuticals now called “puberty blockers” are the exact same used for the chemical castration of sex offenders.) Why are the other long-term effects of “gender reassignment surgery” ignored—the suicide rate, the mortality from infection, the other complications?

Why do children need parental consent to watch an R-rated movie or go on a school field trip, but not to get themselves chemically castrated?

And why are so many people unwilling or unable to answer a question as simple as what is a woman?

What Is a Woman? can only be viewed on The Daily Wire, and only with a subscription to the website. That’s a shame—with more than 5000 audience reviews on Rotten Tomatoes, the movie has a 97% positive rating:

The tiny handful of professional reviews is due to critics having collectively (and loudly) refused even to screen the movie. Red-pilled former liberal Matt Taibbi has some thoughts on that. The Conservative film reviewer Christian Toto gets into it as well, and his piece is worth a quick look if only to see some of the emails sent to Walsh in response to the invitations he sent out to critics.

So we’re not just living in a world where a staggering number of people can no longer say what a woman is, but a world in which explorations of that question are considered beyond the pale.

You not only can’t say what a woman is: you can’t ask why the question can’t be asked or answered.

That’s not how a free society of self-governing adults is supposed to function.

But then, what is a free society?

Asking for a friend…