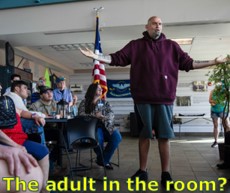 The Democrats’ big hope is a middle-aged man in a hoodie and shorts.
Worries are now growing about his condition
Mikkel Danielsen, Berlingske.dk, Sept 13

Middle-aged men in hoodies and shorts are something I sometimes encounter Sunday afternoons at the dump. You can probably also find them doing yardwork around the house, or messing around with their cars in their driveways.

Or, I imagine, in darkened dives on weekday afternoons.

One place you ought not to find middle-aged men in hoodies and shorts is on the campaign trail for American Senate seats.

And as a general rule, you don’t.

At least you didn’t until the phenomenon known as John Fetterman, the one-trick pony Democrat running for U.S. Senate in Pennsylvania.

He is 2.05 meters tall. His tattoos, clean-shaven goatee and outhouse beard make him look like a Hells Angels member.

He is – as always – wearing an oversized hoodie. It’s raining, but he has – as almost always – a pair of big basketball shorts.

Such is the Fetterman style.

“Hey, Joe, you hear about this guy Fetterman running for Senate?”

“He’s the dude goes around in a hoodie and shorts.”

“Aw, that guy! Yeah, man, I seen him on the news. Totally relatable, man. My kinda guy.”

“No shit, right? Any guy wears shorts and a hoodie’s got my vote!”

That, I’m sure, is how Democrats view the blue-collar voters they’ve been ignoring since St. Obama turned his back on them: simple folk, gruff and crude, coarse in their language and slovenly in appearance.

Because Democrats understand the working class about as well as poodles understand algebra.

Journalists should not focus on a politician’s appearance over their political message – but in the case of Fetterman, the appearance is very much the message.

Indeed. We’ll keep that in mind.

“He is relatable. He’s not fake, like other politicians,” says Erica Schuffert, a dental assistant who has come to greet Fetterman and who for the first time in her life intends to vote for a Democrat.

In leftist American media, grassroots quotes like this usually turn out to have come from hardcore activists. I looked Schuffert up, though, and on Twitter at least it looks like she’s the real deal: a vocal Trump supporter in 2016 and then nothing at all from November 2018 until October of 2021, when she leaps back into the fray to promote a fundraiser for AIDEN. She’s posted nothing since.

That doesn’t mean she’s right—we’ll get to how “not fake” Fetterman is eventually—but at least she herself appears to be real.

Later we meet another random Joe:

“He understands us. He’s just an ordinary guy like us,’ says Keith Thurner, who has voted Republican several times, but this time intends to vote for the Democrat.

Whoops! A Washington Post article from October 2020 quotes Thurner—identified as the business manager of the International Union of Operating Engineers Local 95—as saying that his Union has endorsed Joe Biden, and expressing concern that the union members have been pushing back against that. “Voted Republican several times,” possibly. But not recently.

Democrats, Danielsen assures us, will have to watch Fetterman’s campaign closely because:

Fetterman is testing whether the Democrats can win back Trump voters with left-wing politics and by ditching the suits and formalities to instead talk, look, and act more like the white working class that has left the party.

Quick!—all Democrats, pull on a hoodie and get yourself into some baggy shorts, stat! Because that’s how the white working class likes to dress, even when they’re trying to make a good impression. It’s what they wear to weddings, funerals, job interviews, whatever. They’re so laid back and slovenly—it’s kind of charming once you get used to it!

He talks… with difficulty.

How does he act?

Four days before Fetterman won the Democratic primary in Pennsylvania – May 13 – he suffered a stroke. “I almost died,” the 52-year-old candidate has since said.

For three months he did not give an interview and did not hold any voter meetings. He stayed at home to recover.

That there is straight out of the Biden playbook: Democratic candidates should neither be seen nor heard.

But it also plays right into the best line of Danielsen’s storied career as a journalist:

Now he’s back on the campaign trail, but his brain hasn’t fully recovered.

Danielsen actually embeds a video segment of Fetterman struggling to speak like a regular Joe at a campaign event. It’s a sad spectacle, even pathetic, and the compassionate thing to do would be to look away. Except this man-of-the-people refuses to do the decent thing and step aside, so he deserves our total scrutiny.

Scrutiny says: Pennsylvania deserves a Senator whose brain is healthy and functional. (Or maybe they don’t—I’ve lived in Pittsburgh, you know—but let’s be generous.)

Sure, he went to Harvard, and sure, he was supported financially by his wealthy parents until he turned 40, writes The Philadelphia Inquirer. But he looks like something pulled out of the iron mines outside of Pittsburgh.

Well, okay, maybe not when they’re out frolociking in piles of iron ore, but definitely when they’re down in the iron mines of Pittsburgh.

Except, surprise: there are no iron mines in or near Pittsburgh. There aren’t any iron mines in the entire state of Pennsylvania.

Danielsen’s as clueless as Fetterman is fake.

Fetterman is not trying to persuade all former Trump voters. He just needs to convince a few percent of the more centrist that a Democrat can also be anti-elitist and authentic.

To con them, in other words. To mislead them. To dupe them.

This is after all a man whom Danielsen himself has already informed us is just wearing the skin of a “Pittsburgh iron miner” as a costume. A guy who’s actually insulting the working class by making the visual statement: “Look, I’m a fucking slob—like you!“

Danielsen finally notes, however, as his headline promised, that concerns about the would-be Senator’s health are beginning to get more traction than his slovenly attire.

“If Mr. Fetterman is not well enough to debate his opponent, serious questions arise about his ability to serve as a U.S. senator,” the conservative Pittsburgh Post-Gazette wrote in a recent editorial.

The conservative Post-Gazette. Of course.

Go ahead and read your way through Danielsen’s entire body of work in search of a single description of the New York Times or Washington Post as leftist organs. Sleazy.

The last section of the article is headed “Is this the election campaign of the future?”

(Spoiler: no, it’s not. But it’s a pretty good strategy for candidates with diminished cognitive capacity.)

John Fetterman’s campaign was perhaps actually strongest when he was at home and his election campaign was conducted entirely online.

Indeed. It worked out pretty well for another Democratic candidate whose brain wasn’t fully recovered.

Danielsen shares a lot of the big social zingers Fetterman got in on the Republican candidate (the Trump-endorsed celebrity cipher Mehmet Oz) before observing:

It’s rough, but the digital attacks have been largely responsible for making Pennsylvania’s Senate race the most talked-about campaign of the mid-terms.

Weren’t aggressive tweets something we were trying to get away from? Oh well.

If a politician really benefits more from 90,000 likes on Twitter than from 200 handshakes in the local community hall, Fetterman’s provocative social media campaign could be a model for future election campaigns, predicts The Economist.

However, John Fetterman can no longer hide behind his Twitter profile.

If he is to win the Senate election and become the most unusual senator in Washington, DC, he probably needs to show voters that he is fit for the fight.

He’s not fit for the fight and anyone who’s seen him knows it. The guy can barely sting a sentence together. He makes Joe Biden sound like Demosthenes.

And he’s not unusual. Just slovenly. He makes Bill Belichik look like a fashion plate.

The real question is whether or not the media are going to let enough people see just how broken a man is Fetterman for it to actually matter.

Ah, well, Danielsen is just displaying the amazing lack of actual knowledge for which journalists are so justifiably renowned.

He probably recalls having read or seen something about Pittsburgh being a central hub for the steel industry. And steel requires…er, iron, right? Well, obviously there must be iron mines there. That’s just basic journalistic deduction, man. Totally obvious.

Er no.
In fact, Pittsburgh grew to be a great hub for iron and steel for two very good reasons:
1)There was plenty of coal in the area. And that means you have the energy to construct and run a steel mill. The key point here being, (don’t worry, for the benefit of journalists, I will be typing this quite slowly) cheap energy is crucial if you want to have industry. (or civilization)
And
2) it is located right where the Allegheny, Ohio and Monongahela rivers meet, which meant that the city was well placed to get iron from the great Lakes area (with the main iron deposits of the United States being in Michigan and Minnesota, in areas close to Lake Superior), as well as other raw materials. For heavy and bulky loads, such as coal or iron ore, transport via barges on waterways is the most efficient mode of transportation.

From Pittsburgh, you can sail north to the Great Lakes and beyond (once the St, Lawrence Seaway was constructed you could continue to the Atlantic) and south all the way to New Orleans, and access any place along the Mississippi or Missouri rivers.
With the city thus situated along the major trade routes of the early United States, it was ideal from an infrastructure point of view, that is, if you want to be able to easily send your goods as far and wide as possible.

Also in his defense, whether he knows it or not, they call themselves “Iron City.” (Pronounced “Arn City” in the weird Pittsburgh dialect, as an: “Y’ins want some Arn City to wash dern them hoagies?”) That’s even the name (or was when I lived there) of one of their most popular (cheap) local brews. People just called it IC for short. The Steelers could just as easily have been the Ironmen. But as you say: they didn’t dig the stuff up, they just worked with it to make their glorious steel.

And I just checked: yes, Iron City is still a beer!