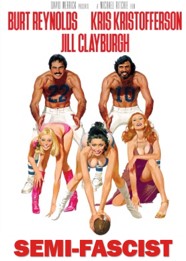 Let’s start with a some textual analysis. Here’s the text:

What we’re seeing now is the beginning or the death knell of an extreme MAGA philosophy. It’s not just Trump, it’s the entire philosophy that underpins the—I’m going to say something, it’s like semi-fascism.

Those words were spoken by Joe Biden at a fundraiser in Maryland on Thursday evening.

“What we’re seeing now” lacks an antecedent: it’s a sweeping generalization with no particular object specified. He was speaking off-camera to big-money donors at a fundraiser, so it’s fair to assume his listeners understood the president to be referring to all the evil being wrought by all the monsters and hobgoblins of their leftist fever dreams.

(At other, more public events in recent days the president has, for example, thanked Democratic voters for “saving democracy” in the 2020 election, perpetuating the Big Lie that the Democrats are the party of democracy and Republicans are enemies of the republic. It’s simply how the left thinks: they love democracy so much that only one-party rule by the Democrats can deliver it.)

Biden says that what we’re seeing now represents either the beginning or the end of “an extreme MAGA philosophy,” by which he presumably means the “Ultra Maga” movement he himself invented a couple of months ago. (Or was it mere weeks?) What we’re not seeing now, if we take the president at his word—always a perilous thing to do with Joe Biden—is the middle of the MAGA philosophy. It might be the beginning, it might be the end, but it’s damn sure not the middle.

He doesn’t say what that philosophy underpins, because the sentence he had embarked upon was leading into a cul-de-sac. He was going to say that the MAGA philosophy he was just describing is underpinned by its own philosophy. Because he’s a genius and his election saved our democracy.

Instead he cuts himself off mid-sentence to tell us he’s going to say something, and “something” turns out to be “it’s like semi-fascism.”

In plain English, Joe Biden was telling his donors that Trump supporters are animated by a philosophy that’s “like semi-fascism.”

It’s not actual fascism. It’s not even semi-fascism, whatever that is. No: it’s something like semi-fascism.

Hillary Clinton took a lot of well-deserved heat for her infamous “basket of deplorables” (link goes to Time.com) comment during the 2016 campaign. Even some on the left realized she’d gone a bit too far—not because they disagreed with her, but because they knew it was the kind of thing a presidential candidate couldn’t say out loud without alienating a lot of voters.

Even in Biden’s dampened formulation with its weaselly built-in walkbalk modifiers of “like” and “semi-“—even in that watered down phrasing, even with his media allies spinning additional modifiers (“he was very careful to clarify he wasn’t taking about conservative Republicans, but the MAGA Republicans”), I don’t believe it’s going to work to Democrats’ advantage to have the ostensible President of the United States describing his political opposition as fascists. Clinton, too, was only calling half of Trump’s supporters “deplorable.”

The demonization of the American right is clearly the central pillar of the Democrats’ mid-term strategy. I’ve written about that repeatedly over the past few months (for example here), to the extent that I even dedicated an entire post to the navel-gazing exercise of questioning whether I was drawing the correct conclusions.

The focus on fascism is especially ironic given the way the GLOB kept trying to “prove” Donald Trump’s fascism with ambiguous definitions that could be applied to virtually anyone—as in this December 2018 example of the genre from Vox, in which a “Yale philosopher” explains (my emphasis):

…my book identifies the various techniques that fascists tend to adopt, and shows how someone can be more fascist or less fascist in their politics. The key thing is that fascist politics is about identifying enemies, appealing to the in-group (usually the majority group), and smashing truth and replacing it with power.

The “enemy” toward whom Donald Trump directed most of his rhetorical fire was the media. Fake news. Enemies of the state and all that. Remember?

The “enemy” toward whom Democrats have chosen to target is… American citizens.

I don’t care whether calling conservatives fascists, or semi-fascists, or pseudo-semi-kinda fascists is itself a hallmark of fascism. I don’t even care whether or not the Democratic Party has gone full fascist, or full communist, or flat-out bananas. Labels are nothing. That’s the left’s game, all that playing around with labels and definitions.

What’s happening is that the American left is working very hard to dehumanize, delegitimize, and in many cases even criminalize political opposition to their power.

And they’re being cheered on by the media.

Here’s the interpretation of Biden’s f-bomb by Ja’Han Jones, writing on Joy Reid’s “The Reidout Blog” over at MSNBC.com—he cites the “semi-fascist” quote we’ve been discussing and applauds its “brutal honesty” before offering up the following (my emphases):

We don’t often hear (Biden) use the word “fascism,” much less in reference to Americans. But he’s absolutely right. Republicans are a semi-fascist party — if not worse. We see this in their reverence for authoritarian regimes like those in Russia and Hungary. We see it in their efforts to suppress votes. And we see it in their allegiance to figures who spread fascist conspiracy theories.

Despite Biden’s occasionally maddening desire to make nice with a Republican Party that despises him, the past week has seemingly brought Biden into closer alignment with the base of the Democratic Party, the majority of whom think Republicans are immoral, according to recent polling.

The Biden administration seems to be getting on the right page with Democrats at the right time. Polling from Gallup showed Biden’s approval rating at 44% throughout much of August, which — while still underwater — is his highest approval rating in a year.

The polling spanned from Aug. 1 to Aug. 23, meaning it doesn’t reflect the public’s view on Biden’s debt cancellation announcement. But it’s a clear sign that Democratic policy victories are good for Biden, and the rhetorical jabs are icing on the cake.

What would happen to Democrats’ perceptions of Republicans, do you think, if leading Democrats began to speak of Republicans as “the loyal opposition?” If Biden & Co. began dialing their rhetoric down?

You can disagree with someone strenuously without branding them a fascist or traitor. You can oppose policy proposals without likening them to Jim Crow laws. You can actually do quite a lot without turning everything into a Manichean, zero-sum clash between Good and Evil.

If you’re genuinely interested in unity, that’s exactly what you do.

Describing roughly half of Americans as immoral and semi-fascist (or worse), is to Ja’Han Jones a laudable “rhetorical jab.” He calls it “icing on the cake.” No half-measures for him: Jones is comfortable calling the entire Republican Party “semi-fascist.”

Ja’Han Jones and Joe Biden are actively working to divide the American people.

They’re proud of it.

They want more of it.

Joe Biden seems entirely oblivious to where that road leads—like one of his sentences, it’s a journey begun with no idea where it’s headed.

But unlike his sentences, by the time he realizes where his divisiveness is taking the country it may be too late to pull back and turn it around.